In June 2011, my wife Hannah and I were young, and also very inexperienced. Our naïveté, however, was balanced by many of the Lord’s servants who guided, corrected, and encouraged us along the way. That same month we were commended to the Lord’s work by the assembly gathering at the Carleton Gospel Hall, Vancouver, BC. Though not the first city in which we labored, it has been our privilege to serve the Lord in the metropolitan area of Guadalajara since February 2012. After arriving, Paul and Barbara Thiessen kindly allowed us to stay in their home and helped us settle our housing situation. We spent the initial months of marriage experiencing full-time evangelistic work in a foreign country. Both marriage and the work joined forces to reveal nearly every flaw we have. I wish I could say that the magnifying glass was only applied that first year, but the cracks continue to show. The Lord has been faithful and gentle, and we are thankful for all that we have learned along the way.

There were three couples working full time in the area in 2012 until November of that same year when our good friends Timothy and Jenna Stevenson began gospel work in the east of the country. At that same time, we were asking the Lord to show us where He wanted us to work. Up until that point, we were assisting in whatever was necessary among believers in Zapopan (part of the same metro area). A brother attending the meetings in Zapopan who was interested in assembly fellowship asked if gospel meetings could be held in his home in Guadalajara. Those meetings began on Wednesday nights on a biweekly basis and continued into 2013. From that point, our sights were set on Guadalajara.

Due to the response we were seeing at these house meetings, we began searching for a hall in June of 2013, and found one in September of that same year. We commenced gospel meetings right away and preached the gospel every night from September 22 until November 3. About 15,000 gospel texts were distributed in the area. The meetings were very well attended and there was blessing in salvation during that series. There was more blessing in salvation before the end of the season, but the following year would prove to be our most difficult in the country up until then. There were massive difficulties in the work and health problems at home, though we did see the Lord’s hand working in salvation at the same time. In 2015, we experienced tremendous blessing as we began to see interest from the believers to gather as a Biblical assembly.

Much of the teaching during this period was focused on assembly truth. Based on these truths, some from the assembly in Zapopan who lived in the area, those who had professed and continued from the evangelistic work in November 2012, and others who were saved but were seeking a Biblical way of gathering, all joined to celebrate the Lord’s Supper for the first time on November 29, 2015. These same brethren made the commitment to do so until the Lord returns or calls them home. Not all have stayed, while others have joined since, but we give the Lord thanks for all that He has taught us in these past three years of assembly life.

In April 2016, we made our third move within the same city when we took our young family to an old but very suitable house in central Guadalajara. We have always tried to make an effort to reach our neighbors, but in the two homes we previously occupied this was mostly an exercise in frustration. In the dense city center, however, we had great opportunities to build relationships with those living around us.

Despite the few inconveniences of living in a dense urban center, the gospel opportunities were seemingly endless. Whether in our own home or theirs, we had the privilege of telling our neighbors about our Lord and Savior. Of course, when we first moved in, most were skeptical, but during the course of the year the Lord gave us opportunities to build relationships with many of our neighbors. Shortly after moving in, we gave a ride to a neighbor named Max and a relationship began. He politely listened to the gospel presentation in our English classes, though he was more interested in learning a second language. Over the period of six months, he became increasingly interested in the gospel and less interested in English. Due to his work schedule, he could not attend our Sunday gospel meeting. During May of 2017, the assembly convened a series of gospel meetings. Max came the very first meeting, and during the first message he was saved by faith in the Lord Jesus. Since then, Max has been baptized and is now in happy Scriptural fellowship with the believers in the assembly.

We thank the Lord that he was not the only one to profess during the series. Many relatives and friends of the believers also attended, which impressed on us the importance of showing Christ with your life alongside the public preaching of the gospel. It has been a running theme during our time in Guadalajara that the majority of those who attend our gospel meetings are neighbors, friends, relatives, and coworkers; that is to say, it is those with whom we have established a relationship.

Since breaking bread for the first time in 2015, our numbers have not doubled and tripled as we had dreamed. We’re slowly learning the lessons of faithfulness and leaving the accounting to the Lord. In your prayers for Guadalajara, please remember the need for men to be raised up with the spiritual ability to guide the Lord’s people. This is always a difficult aspect of the beginning of the assembly as no one wants to rush ahead or, even less, lag behind when the Lord has provided the resources. 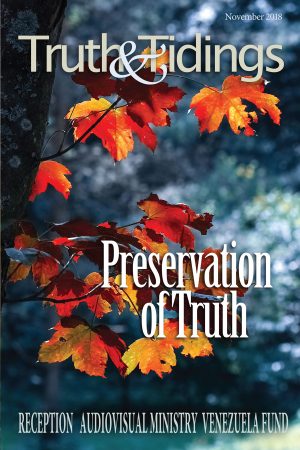