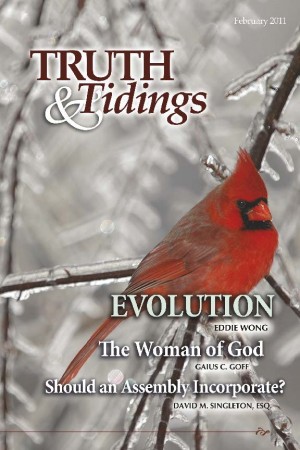 John Slabaugh first came to our area in the spring of 1978. He and William Lavery stayed with us during a remarkable gospel series in Marion. Both of these dear men greatly enlightened us as to the work of God. After my own commendation in 1980, it was John who drew alongside. He became a great influential mentor in our service for the Lord Jesus. He treated me, and others, as an equal; he was a man with no guile. Whether he was involved as a messenger of salvation, ministering the Scriptures, mentoring the servant, or motoring (with no sleep) across the continent, he was a man on a mission.

He was a messenger of salvation as in 1 Thessalonians 2:2. “He was bold in our God to speak the gospel.” In this aspect of dependence upon God, John was a servant above many. He placed confidence and trust in God’s Word, without reservation. He expected someone to be saved every time he preached. He often sought out unconverted individuals who were familiar with the gospel but struggling with salvation. He diligently worked to remove their stumbling blocks. In his preaching he often took simple gospel verses and, in a clear way, broke them down into understandable headings to proclaim man’s ruin and God’s remedy. Shad Sluiter, one of his sons in the faith, said, “when he was finished you understood what he meant.”

Ministering the Scriptures was another aspect of John’s mission. It says in Ezra 7:10, “For Ezra had prepared his heart to seek the law of the Lord, and to do it, and to teach in Israel statutes and judgments.” John was a very disciplined man; daily and promptly he would study the Scriptures seeking to obtain the meaning of the passage. He used various translations and helps to broaden his own mind and then to feed the saints. On three occasions over the years, I listened with admiration as he explained Matthew 18:20.

He was a true gentleman in Bible readings, which he loved. He never monopolized the time but sought to engage others in the subject. Three weeks before his home-call, we spent the weekend together with the Fridley assembly in Minneapolis. His message, not knowing it would be his last, was from Mark 11:3: “The Lord hath need of him.” In the audience was a visitor attending for the second time. John’s ministry proved a great blessing to this young man from Kenya who was saved four years ago. He called after John’s passing to express to the family how grateful he was that their father’s message changed his life. He fully realized the Lord had need of him personally.

Mentoring the servants was also a special gift of our beloved brother. Paul writes in Philippians 2:22, “But ye know the proof of him, that, as a son with the father, he served with me in the gospel.” As a father, John told us what was right and what was wrong. He had an authoritative and experienced manner; it was easy to listen to him. He demonstrated first by example, then by exhortation. Men profiting from his mentoring include William Lavery, Gary Sharp, Dan Shutt, Bill Snyder, Joel Portman, Art Ward, Al Christopherson, and his son-in-law Ivan Hoath. We all learned from his work ethic, wisdom in handling the Scriptures, and his priority in having an attitude of worship. In determining the Lord’s direction, he often said “Al, be flexible; let the Lord be your guide and not men.” What I personally treasure more than anything is how he worked with troubled souls. He never monopolized these precious moments but often paused, either to let the troubled soul listen to his preaching brother or to reflect personally on the issues of salvation, letting the Spirit do His divine work. Every one of our 19 gospel series was marked by this delightful harmony of interacting in this manner.

John was a beloved brother, companion in labor, and fellowsoldier; he will be deeply missed. On the memorial stone placed at the base of his casket were these words: “Silently we grieve and brush away the tears, the memories you’ve left behind will last throughout the years.”