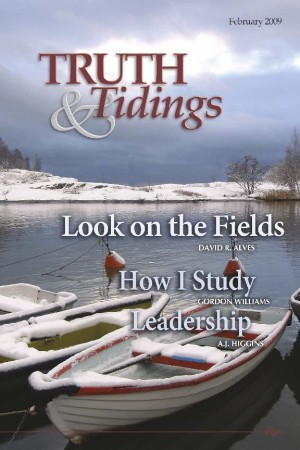 Raising a family in a day as dark as ours is a huge responsibility, one that requires great diligence from all fathers. In the Scriptures, our heavenly Father has provided us with many examples, both positive and negative, to help us become the fathers He intends us to be.

As we consider the lives and mistakes of a few fathers in 1 Samuel, it is not with a sense of superiority, nor with a judgmental attitude. Some of these men, despite their failings, were greatly used by God in difficult times. In our own attempts to serve God, we can benefit by examining the mistakes of Eli, Samuel, Saul, and Jesse.

It’s easy to see the wrongs in the lives of other families while failing to deal with the problems of our own. Our introduction to Eli and his sons, (1 Sam 2:22-25), is at a stage when Eli is old and his sons, Hophni and Phinehas, are grown men who are engaging in immoral behavior in God’s holy temple.

Eli is quick to condemn Hannah for what he thinks is drunkenness in the temple, when in reality she is praying and weeping. Instead of taking action against his sons’ blatant sin, Eli merely rebukes them. Their sinful behavior reveals his lack of control and discipline in their lives and their resulting lack of character. It is not easy to carry out correction on our children, but it is necessary if they are going to be useful men and women for God. The lesson that Eli teaches us is the value of loving our children enough to discipline them.

Samuel—Don’t be Guilty of Nepotism

For the most part, Samuel’s life is a breath of fresh air in a fetid atmosphere. He serves God faithfully and calls the people to return to the Lord with all their hearts and to serve Him. He even gives his sons God-honoring names: Joel, which means “Jehovah is God,” and Abijah, which means “whose father is Jehovah.” They, however, do not “walk in the way” of their father, but turn aside after gain; they take bribes, and “pervert justice” (1 Sam 8:1-3).

Despite their wickedness, Samuel chooses to make them judges over Israel. In this he allows his desires for his sons to overcome his spiritual discernment. Pushing or promoting sons into position among God’s people is not a father’s calling. Good fathers want the best for their children in every aspect of life, but a father’s responsibility is to train his children in the way they should go and bring them up in the discipline and instruction of the Lord, not force them into a sphere of spiritual service never intended by God.

As a busy man in the work of the Lord, Samuel may not have taken time to cultivate close relationships with his sons. I am not saying that Samuel is guilty of this, but the possibility is there. It is a constant challenge for fathers to determine the time spent in “God’s work” and time spent with the family. Remember that whatever work God has given you–preaching, teaching, shepherding, or serving in another way—this doesn’t negate your responsibility as a father. At a recent conference, it was wisely suggested that we involve our families in as much of our spiritual activities as possible. With children of varying ages this can be a challenge, but it is important.

Characterized by disobedience to God, Saul’s life is a tragic example of how our relationship with God affects our children. A disobedient life is a selfish life and it brings sorrow to all concerned. Saul’s disobedience in the battle against Amalek results in his ultimate loss of the kingdom. His rash vow (1Sam 14:24) and lack of communication with his son, Jonathan, would have resulted in Jonathan’s death had not the people “rescued Jonathan.”

Instead of providing godly leadership for his family, Saul exhibits fits of jealousy and fury which lead to attempted murder. In uncontrolled resentment he tries to kill his son’s best friend, David, by throwing a javelin at him. Later, he uses deceit in another attempt to destroy David. Enraged at his son Jonathan’s friendship with David, Saul even casts a javelin at his son. Jonathan is provoked to “fierce anger” and grief by his father’s behavior. Saul teaches us from a negative point of view the value of being a good example. If we fathers do not live obedient lives before our sons, how can we expect them to rise any higher than our disobedience?

When Samuel visits the house of Jesse in Bethlehem (1Sam 16:1-13) to anoint a future king for Israel, he calls for Jesse and his sons to be sanctified for the sacrifice of a heifer. Samuel’s arrival in the town is enough to make the elders of Bethlehem tremble, so this meeting at Jesse’s house is a great honor to the family. Someone, however, is left out. As the sons are called to pass before Samuel from Eliab, the firstborn, down the line, Samuel asks, “Are all your sons here?” As if suddenly remembering David, Jesse says, “There remains yet the least.” The one thing I would like to highlight from the father-son relationship between Jesse and David is the importance of respecting, valuing, and honoring each child equally. Age, ability, gift, stature, and appearance have nothing to do with the value of a person before God. Our Lord gathered the little ones in His arms and blessed them.

May we then learn from the examples in the Scriptures! Failure is not when we make a mistake. Failure is when we do not learn from our mistakes. May we humbly learn the lessons God has for us through the mistakes of these fathers in 1 Samuel and succeed in being the fathers God desires us to be!