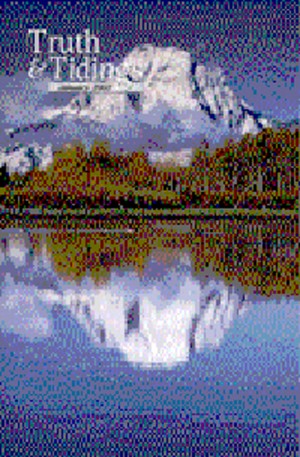 They shall smite the Judge of Israel with a rod upon the cheek. The One who longed to shepherd them and judge them, they rejected. This happened 2000 years ago. The enormity of this national tragedy is given in verse 2, when Micah tells us the greatness of the One whom the nation rejected. He was born in Bethlehem Ephratah-yes-but He did not commence His existence in Bethlehem Ephratah! He is the Eternal One! Please notice carefully the literal translation of the Hebrew at the end of Micah 5:1. From thee shall He go out to Me to be ruler in Israel, and His comings-out have been from of old, from the days of eternity. The reader must notice that the rendering in the New International Version of the phrase in Micah 5:1, with whose origins are from of old from ancient times is a tragically inaccurate departure from the literal translation given above. Alas, any suggestion as to the Lords having origins may lead some who are unacquainted with the original Hebrew text to question the scriptural evidence for the eternality of the deity of our Lord Jesus Christ. Let us return to the argument Micah is presenting. The Messiahs comings out have been from of old, from the days of eternity! Yet tragically, the nation would reject Him. The result is sad but inevitable. Therefore will He give them up . UNTIL (Mic 5:3). I love this word UNTIL. The setting aside of the nation is not forever. It has lasted for 2000 years but Micah tells us it is only UNTIL the time that she which travaileth hath brought forth: then the remnant of His brethren shall return unto the children of Israel. What a wonderful thing it is going to be when the nation shall come to the birth and a remnant shall come forth in that tribulation period! This shall herald the happy events of Micah 5:4 when He shall stand and feed as a shepherd in the strength of the Lord, in the majesty of the name of the Lord His God.

However, there must have been a worry in Micahs mind, as to what would become of the godly Jewish remnant during the period that God has officially given up the nation. The Lord indicates to Micah that he need have no concerns here. And they shall abide, for NOW shall He be great unto the ENDS of the earth. During this now period, no corner of the earth is to be outside of His protective hand. He controls the ages and takes care of His own irrespective of the assaults of the enemies of God.

The application of this panoramic revelation to the time of Micahs ministry.

As we have seen earlier the immediate threat in Micahs lifetime was that of the Assyrian in the time of King Hezekiah. It was this which left Samaria as a heap in the field. As we learn in Isaiah 36-37, this posed a very serious threat to the tiny little kingdom of Judah. This must be distinguished from the much later Babylonish captivity clearly prophesied by Micah in chapter 4:10 and which was to leave Jerusalem in heaps. However, Micah was pointing out that God, by intervening to arrest the Assyrian invasion outside the walls of Jerusalem, would prove His power to bring to pass the panoramic prophetic picture described in the now period mentioned above. More specifically, He would prove His power to preserve His own faithful ones down through the centuries of the now period. This is why Micah tells us in 5:5, This man shall be the peace when the Assyrian shall come into our land … Micah recognizes that it was not Hezekiah the King of Judah who was in control – rather it was the One whose comings out have been from of old, from the days of eternity and who was promised to enter into time at Bethlehem Ephratah on a journey which would take Him back to Heaven whence He came. From thee (Bethlehem) shall He come forth unto ME. And yet this would demand this Everlasting One to endure the rejection of His own nation and the temporary setting aside of this nation.

However, one final question remains. How ever would the Divine promise of the inheritance to Abraham and David be fulfilled? How would the matter of sin be dealt with? After all, this was the issue which brought about the misery of Israel down through the centuries.

The answer is given at the end of the prophecy. The Everlasting One on His journey from Bethlehem back to the Father would, despite His rejection by the nation, accomplish atonement, on the basis of which the covenant to Abraham and David would be fulfilled. Who is a God like unto Thee who pardoneth iniquity? Notice that the word pardon (nose) can equally well be translated who beareth the iniquity. The word to bear (nose) is exactly the same word as is used of the scapegoat (Azazel) which carried (nasa) the iniquity into a land not inhabited (Lev 16:22) on the day of atonement. By this means, God would pass by (note NOT the Hebrew word for pass-over) the transgression of the remnant of His heritage. The word to pass by (over) actually means to deal with. In other words, God would deal with the sin through dealing with the sinless Divine Sin-bearer. The result? The promise to Abraham would be effected, and one day, the Son of Abraham the promised Seed would inherit the gate of His enemies.

Yes, the promise sworn to the fathers in the days of old will be fulfilled! Then the vision of Micah the Moresthite, the prophet concerned with the inheritance, shall be fully realized.