From the pit to the prison to the palace, Joseph reminds us of the Lord Jesus. His Hebrew name given at birth by his mother Rachel means “He will add.” Projecting our minds forward to our heavenly Joseph, He had a work of addition to do: “The Lord added to the church daily such as should be saved” (Acts 2:47, KJV).

Pharaoh, subsequent to Joseph’s exaltation, also gave him an Egyptian name, Zaphnath-paaneah. While the exact meaning may not be entirely conclusive, we appreciate Thomas Newberry’s marginal reference to two suggested meanings. The first is “savior of the world,” and the second, “revealer of a secret.” The woman of Samaria in John 4 said, “Come, see a man, which told me all things that ever I did” (v29, KJV). This is our heavenly Joseph, the “Revealer of a secret.”  We further read in John 4:42 of the testimony of the Samaritans: “This is indeed the Christ, the Savior of the world.”

There are four references to Joseph’s bones in Scripture. Joseph died at age 110 and was expertly embalmed by the court physicians of Egypt. Several hundred years later, the exodus took place. It was another 60 years before his remains were buried in Shechem.

Throughout the duration of Israel’s enslavement in Egypt and wilderness journey, there was a careful preservation of Joseph’s remains. His bones were a memorial – a constant visible reminder of his death. We can draw some parallels between Joseph’s bones and the Lord’s Supper.

Associated with a Promise

First of all, we notice that Joseph’s bones are connected to a promise. The first two Bible references (Gen 50:25, Exo 13:19) repeat the promise, “God will surely visit you, and ye shall carry up my bones from hence.”  No doubt Joseph was familiar with the “horror of great darkness” that was Abram’s experience in Genesis 15 when it was revealed to him that his descendants would be slaves in captivity for 400 years. The promise was that one day God’s people would be taken out of Egypt. John Ritchie teaches us in his excellent book Egypt to Canaan that the believer is in “Fact” in Egypt, in “Experience” in the wilderness, and in “Position” in Canaan.  Dear Christian, though you are in the world (John 17:11), you are not of the world (John 17:16). We who are in the world in fact have been given a promise by the Lord Himself, “I will come again” (John 14:3). It is Paul who associates the Lord’s Supper with that promise. We read in 1 Corinthians 11:26, “For as often as ye eat this bread, and drink this cup, ye do shew the Lord’s death till he come” (KJV). What a great promise this is, and our hearts yearn for it: “Even so, come, Lord Jesus!”

Associated with a Passing

Joseph’s instructions regarding his remains were given immediately prior to his death. In the Genesis account we read, “Joseph said unto his brethren, ‘I die’” (50:24). In the Hebrews account we read, “By faith Joseph, when he died …” (11:22). This brings to mind the closing hours of our Lord’s life, when He took the bread and cup and instituted the Lord’s Supper. Paul says it was in “the same night in which He was betrayed” (1Cor 11:23), just hours prior to His death.

Associated with a Precept

We can consider that the instructions given by Joseph were a precept, or “a rule for action or behavior.” We read in Hebrews 11:22 that Joseph “gave commandment concerning his bones.” We, at times, use poetic language in relation to the Lord’s Supper: “His dying wish,” an “invitation,” or “at His request.” However, this is not the language of Scripture. “This do in remembrance of me” is an imperative – a command to be obeyed –  and it is to be obeyed on a weekly basis (1Cor 11:25, Acts 20:7).

Associated with a Proclamation

What a strange sight the transportation of a coffin through the wilderness must have been. Without a word spoken, the box containing his bones was a constant reminder of Joseph’s death. Wherever it was seen, his death was being proclaimed. Such is the truth of the commemoration of the Lord’s Supper. The bread and the cup, chosen symbols of His body and blood, silently placed upon the table, “shew forth” (proclaim) the Lord’s death.

Associated with a Picture

Notice how Joseph did not say, “Carry me up,” but rather, “Ye shall carry up my bones.” He would not really be present with the remains. They bore some physical semblance, but it was not literally Joseph. James 2:26 tells us that “the body without the spirit is dead.” The real Joseph wasn’t there.

This certainly reminds us of the mistaken teachings of transubstantiation and consubstantiation in relation to the Lord’s Supper. Such teachings suggest that something miraculous occurs with the physical elements of the bread and cup. Transubstantiation is a Catholic teaching that the bread and wine become the literal body and blood of Christ. Consubstantiation, an offshoot of the Protestant Reformation and Luther, is more recent, and is the teaching that the presence of the Lord comes alongside, “with, in, and under,” the bread and the wine. It claims that the bread and the wine are spiritually the body and blood of Christ, while remaining physically only bread and wine. In both cases, this is a departure from the plain teaching of Scripture and attempts to spiritualize what was intended by our Lord to be symbols. These are pictures only of His body and blood separated in death. Horatius Bonar got it right in his hymn, “Only bread and only wine, yet to faith the solemn sign, of the heavenly and divine! We give Thee thanks, O Lord.”

Associated with a Plot

Faithfully, the children of Israel carried Joseph’s bones through the Red Sea as they made their exodus from Egypt, over 40 years of wilderness wanderings, across the flood waters of Jordan, and then into the promised land under Joshua’s leadership. Joseph’s bones arrived at their final resting place, and his remains were buried in a parcel of ground in Shechem (Josh 24:32). The promise of Genesis 50:24 was realized: “God will surely visit you, and bring you … unto the land which he sware to Abraham, to Isaac, and to Jacob” (KJV). As the memorials of Joseph’s death were put away, we are reminded again of our heavenly Joseph, and the temporary nature of the Lord’s Supper. It will only be “until He come.” Then, face to face, we will see the beautiful man of Calvary. Symbols will give way to sight. May we treasure the weekly commemoration of the Lord’s death in the eating of the bread and drinking of the cup. 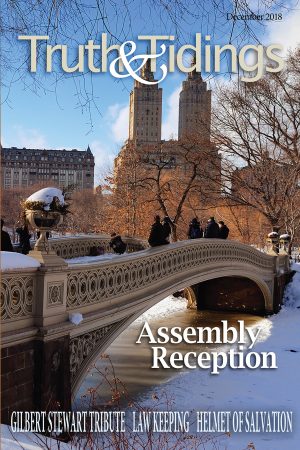