Ever since God has allowed men and women a relationship with Him, they have turned to Him in times of trouble and sorrow. We often turn to Him in these difficult hours, but, sadly we are not as faithful in seeking Him when the skies are sunny.

David said of the Lord, “When my heart is overwhelmed, lead me to the Rock that is higher than I” (Psa 61:2). During the worst day of his life, Job turned his heart to heaven and said, “The Lord gave, and the Lord hath taken away; blessed be the Name of the Lord” (Job 1:21).

It has been in the crucible of circumstance, the depths of human sorrow and weakness, that some of our greatest hymns have been written. Saints, almost overcome with the heartbreak of tragedy and hurt, have penned lines that remain to us today; truths in song, preserved for our comfort, learning, and blessing. Such a hymn is the one written by a Scotsman named George Matheson when he was totally blind. He described this hymn as “the fruit of much mental suffering.”

He was born in Glasgow on March 27, 1842. Even as a young boy, he only had partial vision. By the time he was 18, he was totally blind. This did not hinder him in his academics. He excelled at both Glasgow Academy and the University, graduating from the Seminary of the Church of Scotland with highest honors. He began to preach in 1866.

He was a brilliant student of Scripture, and became an even more brilliant orator and preacher. It has been said that his preaching reached all classes of society, both the poor, and those high in society. Of him, one wrote, “He was not only a man of outstanding oratory and unique intellectual powers, but one who was in touch with the living God.” Many stated that a message they had heard him preach remained with them for the rest of their lives. Queen Victoria was so impressed by his preaching that she presented him with a sculptured memorial of herself.

By the age of 30 he had written a number of devotional writings and theological works. One of his finest was a book called Studies of the Person of Christ. He wrote poetry and a volume of sacred hymns and songs.

It has been conjectured that this hymn was written out of the sorrow of his heart from being rejected by a woman he was engaged to marry. When stories of his life are compared, this suggested source seems to be a recurrent theme, although it cannot be fully documented. It has been said that she left him and broke off the engagement when she learned of his impending total blindness. His sadness remained, but he was helped for years by his faithful sister, who learned Greek, Latin, and Hebrew, to help him with his theological studies and his devotional writings.

It was at the time of his sister’s own wedding that he was given the words for this hymn. He described it as “the inspiration of a moment.” The rest of the family and friends had left for her wedding; he was left alone with the sadness of his own thoughts. He describes what happened this way:

“My hymn was composed … on the evening of the 6th of June, 1882. I was, at that time, alone. It was the day of my sister’s marriage, and the rest of the family were staying overnight in Glasgow. Something happened to me which was known only to myself, and which caused me the most severe mental suffering. The hymn was the fruit of that suffering. It was the quickest bit of work I ever did in my life. I had the impression rather, of having it dictated to me by some inward voice, than of working it out myself. I am quite sure that the whole work was completed in five minutes, and equally sure it never received at my hand any retouching or correction. All the other verses I have ever written are manufactured articles; this came like a dayspring from on high. I have never been able to gain once more the same fervor in verse.”

The four key words of this hymn are “Love, Light, Joy, and Cross.” One has said these four words represent the complete fulfillment for any believer whose life is totally committed to the will of God. The tune for the hymn was written in one brief sitting by Albert Pearce, as requested by the Scottish Hymnal Committee. He said, “I wrote the music straight off, and may say that the ink of the first note was hardly dry, when I had finished the tune.” The words of this hymn have lived for 133 years, giving solace to believers saddened by the distresses of life.

O Love that will not let me go,

I rest my weary soul in Thee;
I give Thee back the life I owe,
that in Thine ocean-depths its flow,
May richer, fuller be.

O Light that followest all my way,
I yield my flickering torch to Thee;
My heart restores its borrowed ray,
that in Thy sunshine’s blaze, its day
May brighter, fairer be.

O Joy that seekest me through pain,
I cannot close my heart to Thee;
I trace the rainbow through the rain,
and feel the promise is not vain
That morn shall tearless be.

O Cross that liftest up my head,
I dare not ask to fly from Thee;
I lay in dust life’s glory dead,
and from the ground there blossoms red,
Life that shall endless be.

That love took the Savior to the terrible cross. The light was promised by the Light of the world, Who suffered for sinners in the darkness of Calvary. Joy is promised by our Father, through the Lord Jesus, even in the billows of personal pain and sadness. This, then, is the inspiration given by a loving God, to one of His children in one of his darkest moments, allowing him to write these amazing words. 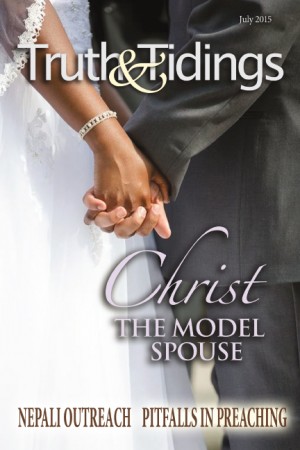