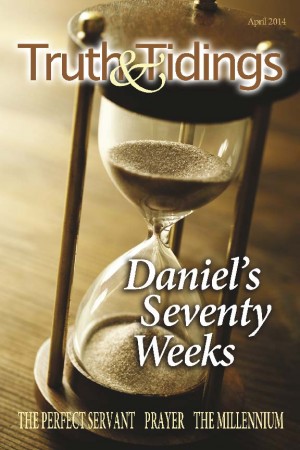 The 69th week of the prophecy closed with the presentation of Christ. This is the point where the prophetic clock was stopped. All that follows in verse 26(b) is the consequence of unbelief in the Messiah. Since the 70th week only commences in verse 27 it is very obvious that the text demands a time gap between these two verses. Two major events take place after the 69th week has closed with Messiah presented to the nation’s leaders. In the first event, unbelief takes over and the result is “Messiah is cut off.” This points to the crucifixion four days after His presentation; this is the answer of the nation.The four days (10th – 14th Nisan) remind our hearts of Egypt and the kept lamb (Exo 12:1-6).

The second event is the total destruction of the city (Jerusalem) and the sanctuary (the temple). This is the answer from God to that generation’s unbelief in the cross. This took place 38 years after Calvary in AD 70, when, in the process of subduing the Judean rebellion, the Roman legions under Titus destroyed both the city and the sanctuary. The agent of this destruction is very carefully identified as “the people of the prince that shall come.” The adjectival participle describing the prince as “coming” makes it clear that the people from whom this particular prince comes would be on the world stage before he, the prince, was. In other words, while the people are assuredly the Roman army, the prince here cannot be Titus. It is the western peoples who are in the prophetic picture, not Titus.

It may be relevant to recall that in AD 70 the fanatical defense of Jerusalem incited the legionaries to unparalleled brutality. Crosses around the city were in such numbers that it was said that not a tree was left in Judaea. Titus had given explicit orders that the sanctuary was not to be destroyed, but even the authority of Titus could not hold in check the rage of his veteran legions and the temple was deliberately torched. In the blazing temple, gold melted and ran down between the stones. To get the gold the soldiers pried the stones apart. A greater than Titus had said, “There shall not be left one stone upon another” (Matt 24:2).

However, it is clear that this prophecy looks beyond Titus to show that a far greater than Titus would emerge from the peoples of the western world. Another leader far outranking Titus, identified as the Coming Prince, would arise in the west. As we view history, the gap between people who destroyed Jerusalem (the Roman Legions) and this “Coming Prince” lengthens to centuries.

The three statements that follow these two events summarize the history of Jerusalem during this gap period, indeed until the commencement of this 70th week: (a) “And the end thereof shall be with a flood,” (b) “And even unto the end shall be war” (RV), (c) “desolations are determined.” The use of the word “flood” in the OT is used frequently of an enemy invasion (Nah 1:8; Isa 28:2). It is simply a matter of historical record that in these intervening years down to the present time Jerusalem has endured 36 major wars, experienced 20 sieges, and been destroyed 17 times.

The Gap between the 69th and 70th Week

While it is not strictly within the remit of the exposition of the seventy weeks for our intelligent understanding of the whole range of prophetic Scripture, it must be noticed what takes place within the time break. The following is a brief summary:

(a) The resurrection of Christ on the 17th of the month Nisan and His ascension 40 days later.

(c) The descent of the Holy Spirit at Pentecost and the incorporation of the Church (Acts 2).

(d) The mission of the Church in the preaching of the gospel worldwide.

(e) The removal of the Church from earth when Christ comes to the air (1Thes 4:13-18). It should be pointed out that since the Church is not introduced until after Israel has been set aside it is clear that the Church must be removed from earth before Israel comes back into the prophetic timetable with the confirmation of the covenant (Dan 9:27).

It is clear from the above that the Church of the Dispensation is neither a continuation of Israel nor a replacement for Israel. The Church, a distinct entity, commenced after Israel was set aside and her history on earth closes at the Rapture, before Israel comes back into the timeline of prophecy with the signing of the covenant.