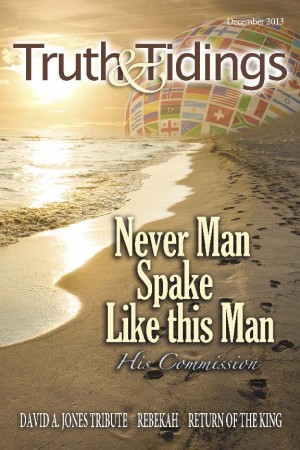 What a waste!” The criticism which filled the house in Bethany centuries ago has been echoed and reechoed throughout the millennia since then. The opinion arose from an unconverted heart at the onset (John 12:4-6), but the chorus was soon taken up by disciples who did not value what had happened (Matt 26:8, 9).”Why was this waste of the ointment made?” (Mark 14:4). You can envision those who were in touch with the marketplace quickly calculating its value; those concerned with the needs of the poor were spinning their minds as to how many might have been fed with the proceeds from its sale. Noble exercise indeed! And to have to witness it running down from His head to His feet and then to form little pools on the floor around him – it was grating to think of the “what might have been,” if only Mary had been wiser in her use of it.

Perhaps what surprised them most of all is that the Lord, Who had a far greater care for the poor and hungry than any of the 12, sat there and allowed the ointment to be used in this manner. Why was He so slow in rebuking her?

Christian living is frequently labeled a “waste” by the unregenerate and the carnal. To devote one’s life to a small assembly with little evidence of appreciation or visible blessing; staying by the plot of land in days of famine, Boaz-like – all this is a waste to public opinion. For a woman to give herself to family and the raising of children rather than the pursuit of a career is seen as “a waste” of her intellectual talents. To labor, often without visible results, to contribute to assembly life, often without notice, is labeled “a waste of your life” by those who are in the know. Men and women with promising careers in secular life have left their homes and poured out their lives on foreign shores to the same chorus of savants who view it all as a waste.

But what made Mary’s ointment so precious was not its value in the market place, though it was expensive. What gave it tremendous value was the heart of worship which accompanied it as it was poured out simultaneously with the ointment.

His assessment, however, is all that really matters. To His heart, it was worship at its finest and highest. On the spot, He established an eternal memorial to her deed (Matt 26:13).

Let us learn well this vital lesson: It is not just what is done in service and faithfulness, but if done out of love and devotion to His person, it is an act of worship and, as in Mary’s case, will be recognized and spoken of eternally.

Waste or worship? If for Him, not one drop is ever wasted!