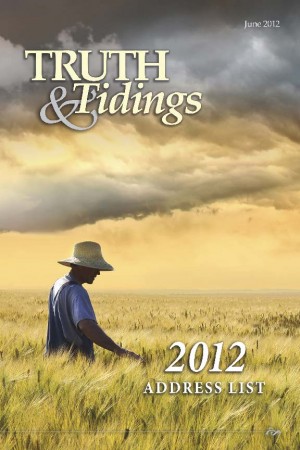 John McCann was saved at the age of 17, baptized, and received into the assembly in Kilmore, N. Ireland. As he grew spiritually, he became very exercised as to God’s will for his life. His interest was directed to the needy land of Brazil. Eventually, as he read over Numbers chapters 13 and 14, he became convinced that the Lord was calling him and that to fail to “enter the land” would manifest unbelief. His brethren in Kilmore gave him full support and commended him to the grace of God for the work. He sailed for Brazil in March 1948 being followed a few months later by his bride-to-be, Miss Kathleen Boston. They were married and made their home in the state of São Paulo until they had a working knowledge of the Portuguese language. Eventually they moved to live in Rio Grande do Sul, the most southerly state of Brazil. This move presented a great challenge to faith and courage, as there was no known work connected to New Testament assemblies there. They set up home in the city of Caxias do Sul, and were joined in 1952 by brother Henry M. Wilson, also from Northern Ireland. Many contacts were made amid much opposition. Nothing seemed to be accomplished at the time, but all was not in vain, for a man, contacted at that time, was saved in 1956 in the city of Porto Alegre. John and Kathleen moved to Osório in 1953 and it was there they had the joy of seeing the “first fruits” of Rio Grande do Sul. A young man called Alécio Freitas was reached and saved. This brother is still going on well. John and Kathleen (who predeceased him in 2004) moved to various areas as they spread the gospel of the Lord Jesus Christ. The results are seen today in the nineteen assemblies in the Rio Grande do Sul and the two in the neighboring state of Santa Catarina. In later years other workers, including the writer and his wife, came to labor in the area. Our brother sought to help and encourage these younger workers.

During his last visit to Brazil in 1999, the early signs of his illness were developing. Eventually he was taken into care in Faith House in Belfast. Here he was tenderly cared for both by the staff and by his daughter and son. On March 9, 2012, he was called to be “with Christ,” his passing mourned, not only by his family, but also by those who knew and loved him both in Ireland and in Brazil.

His funeral took place from the gospel hall in Lurgan on 12th March. The writer paid tribute to him at the hall, after which his nephew John McCann (junior) prayed. Noel Fleck and Lindsay Carswell took part at the graveside.