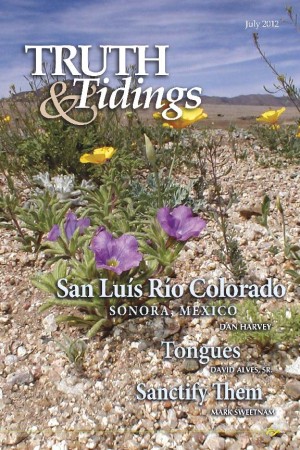 Frederick Stanley Arnot was born in Glasgow, Scotland, on September 12, 1858. For a number of years, his family lived close to the David Livingston family in nearby Hamilton. This experience made a deep and lasting impression on young Arnot, who from an early age developed an interest in the continent where his “hero” was a missionary and explorer. Arnot went to Africa in July 1881, two months before his twenty-third birthday, and labored in and for Africa until his death on May 14, 1914, in Johannesburg. He spent 33 years and traveled 30,000 miles to bring the gospel to perishing sinners. One man who heard him preach said that “[his] words pierce the heart.” King Lewanika of Barotseland, (largely located in what is now western Zambia), had many talks with Arnot. At first, he did not want Arnot to teach his people the Word of God; he was particularly upset at the truth that a mere slave could become saved and “be seated in the palace of God,” and a king or chief could be shut out. Arnot reminded Lewanika that the words were not man’s words but God’s. Eventually the king relented and allowed him to preach the Gospel. Where did Arnot derive his love for souls and this great truth – that a mere slave could be saved and in heaven forever? The verse God used to reach Arnot himself sheds light on that question.

Arnot was saved as a boy. He and a friend had taken fruit from a neighbor’s garden. Called a thief by his friend’s older brother, Arnot realized he had sinned against God. He described the results of this early conviction of sin: “I dreaded to pass another night; I could not tell anyone what a wicked boy I was. I knew I ought to tell God about it, but I trembled to do so at my usual evening prayer, so I waited until all were in bed and the house quiet, then up I got. Now, I thought, I will ask God to forgive me, but words would not come, and, at last, I burst into a flood of tears. I felt I was too wicked even for God to forgive; yet a glimmer of light and hope came to me with this thought: ‘That is why Jesus died on the Cross for me, because I am so wicked.’ Among many texts of Scripture that my parents had taught me was John 3:16. I repeated it to myself on my knees. It was 2am, and that ‘whosoever’ took me in. I awoke next day with a light heart, the burden was gone.”

“That ‘whosoever’ took me in!” This embracive word, “whosoever,” is used by God to express how total and pandemic our sinful condition is: “Whosoever committeth sin is the slave of sin”; “Whosoever shall keep the whole law, and yet offend in one point, he is guilty of all” (John 8:34; James 2:10). None is excluded from the guilt, bondage, and misery of sin. The self-righteous streak in each of us – convincing us that we are better than others – is nothing more than pride and spiritual blindness to our true condition.

Similarly, this is the word that conveys how eternal and catastrophic our condemnation will be in the Day of Judgment: “Whosoever was not found written in the book of life was cast into the lake of fire” (Rev 20:15). Few words in the Bible are as sobering as that description of eternity for the Christ-rejecter: “the Lake of Fire.” Little wonder that the Lord Jesus counseled us to seek salvation, ignoring any other loss however painful, so that we would not lose our soul in that awful lake!

However, in the very next chapter, (Rev 22:17), and just before the conclusion of God’s Word, there is a glorious invitation. How global and symbolic that invitation is! Symbolic because it is as though God will not allow His Word to close without one more fervent appeal to the lost: “Whosoever will, let him take the water of life freely.” How can God make such a global, all-embracive invitation to “whosoever”? It is because of the glorious work completed by His Son and expressed in those glorious words:

“For God so loved the world, that He gave His only begotten Son, that whosoever believeth in Him should not perish, but have everlasting life” (John 3:16).