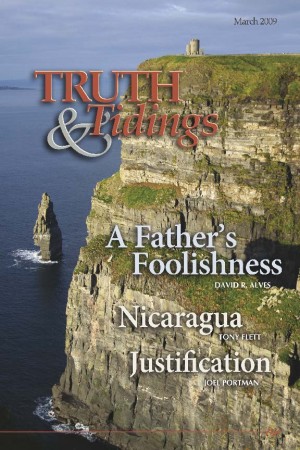 On a warm March evening in 2003 while I watched a steady stream of curious people trickle into a basketball court in Dolores, Nicaragua, I was wondering how they would respond to a clear, simple gospel message. Five years later, it is a joy to see how some of the Christians who were saved during that series have grown in their faith and reached out to others. Together they form a part of a New Testament assembly of more than thirty believers who are seeking to be obedient to their Lord and Master.

While the Lord was leading believers from Canada, the U.S., and El Salvador to Dolores in 2003, he was also putting this country in the hearts of other Christians from North and Central America. Today there are eight local church testimonies throughout Nicaragua, as well as a number of new works in progress. Many of these works were started by brethren and sisters commended from the assemblies in Honduras. Most are young couples with a desire to make their lives count for God and are very active in gospel work. It has been a privilege to be able to work together in reaching out to the lost and teaching New Testament church doctrine and principles.

As new works become a bit more established the need for local leadership increases. We have no intention of taking on long term leadership responsibility, but rather would seek as Paul exhorted Timothy, to teach others so they, in turn, can teach. The local brethren are taking more of the responsibility for the administration and ministering in the assembly, and in the outreaches that have grown out of it. We continue to look to the Lord for the need of elders, and realize more and more the challenges of finding honorable character, wise family leadership, careful shepherding, and able-teaching amongst men who have been saved less than five years. We feel we must wait on the Spirit of God to point them out and take to heart the warning Paul gave in 1 Timothy 3:6 against placing undue burden on a novice for his own spiritual well-being as well as the assembly’s. We have seen that the Lord has laid this desire on the hearts of some of the men here. We ask you to pray that the Lord will continue to prepare their hearts and lives as well as that of their wives.

Although spiritual needs will always be the top priority, every day we are faced with a multitude of practical needs amongst the people with whom we are working. Houses here are commonly small and poorly built. It is a humbling experience to walk into a believer’s spotlessly clean home, only to notice the dampness seeping through the walls and the plastic tacked up on the ceiling. The past few months have found us helping some of the believers to acquire or repair their houses; a stability at home seems to overflow into stability in other areas. Despite their hardships, they desire to cheerfully share what they have with others.

The current world economic situation has hit hard in this country where many live on two dollars a day or less. The recent upward surge in food prices has made it hard for many to provide for their families. Rising fuel prices have affected the availability of public transport upon which many depend. Please pray that the Lord will give wisdom in meeting the growing needs around us.

Nicaragua is a country of great natural beauty, with diverse landscapes and culture. All of the commended workers, and the established local assemblies, are scattered throughout the most populated, Spanish-speaking, western half of the country. Up to this point the majority of these works have been in cities. In the past couple of months we have been impressed with the response to the gospel in some of the more remote areas of Nicaragua. Many of these communities may not be so far away geographically but can only be reached by boat or off-road vehicles. The people live in very humble homes and have limited contact with the rest of the country. Perhaps the lack of material things gives more of a desire for spiritual hope for the future. I feel we need wisdom and divine guidance as to meeting this need, not only with the gospel but with the needed teaching in the future. There are a number of local brethren that share this vision so we trust the Lord will provide the means to carry out this purpose in the coming months.

With no roads connecting the two halves of the country, the few trips to carry the gospel to the east have been by plane or boat. The Caribbean coast is mostly inhabited by descendents of African slaves who primarily speak English or indigenous peoples who speak their own dialects. There is more poverty, more hopelessness, and possibly more of a willingness to listen to a message of hope. On one of these trips with brother Andrew Hale from Seattle, Washington, while walking the streets of Bluefields we came across an old, black gentleman sitting in a little shack no more than eight feet square. As I approached the entrance to give him a Seed Sower text, I noticed he had a well-worn English Bible in his hands. I asked him what he was reading, and he replied, “This is my favorite book.” When asked where he was reading, he replied, “The book of Job. It’s one of my favorites because Job had a lot of questions but didn’t receive all the answers … just like me.” He went on to tell us that as a young boy he had learned of his sinfulness and what Jesus had done on his behalf, had trusted Him for salvation those many years ago and continued to trust Him still. We asked how he survived. He said, “The Lord provides. Some days I have food, some days I don’t. I just trust Him.” I don’t know if I will ever see old Joe again in this life, but I am certain I will see him in heaven. He taught us both a valuable lesson that day: true happiness and contentment is found through faith and confidence in a living Savior.

The harvest truly is great, but the laborers … will one be you?