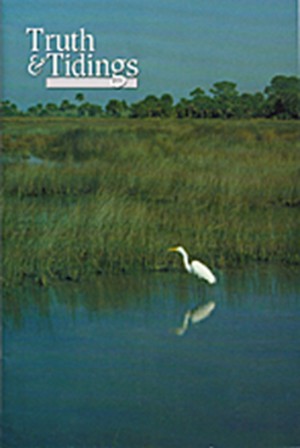 My conversion was simple, yet unique in that it was I to whom God gave life eternal. Born in a humble home in Lurgan, N. I., of parents who belonged to the Presbyterian Church, I regularly attended church as well as morning and afternoon Sunday schools. From infancy we were taught the Holy Scriptures and as I grew up I knew I was a sinner, in need of a Savior.

In October, 1934, the church planned special meetings and invited an English evangelist, Mr. Tom Rees. One evening, before those meetings commenced, I heard the gospel preached at an open-air meeting in the center of the town. One of the speakers in his message, said, “Young man, if the Lord were to come for His people before these meetings start, are you prepared to go with Him?” I knew I wasn’t saved, and God used that pointed question to awaken me to my danger. I went straight home, and in my bedroom before God, conscious that I was a lost sinner and knowing that Christ died for the ungodly, I believed God, put my confidence in what He said about His Son and asked Him to save me (John 5:24). He did, and on that last night of September, 1934, I passed from death to life. While attending those meetings I got assurance from God’s Word, as did many others who were saved at that time.

In the succeeding months and years I was one of a group of young men who were interested in Bible study, tract distribution, and preaching in the open-air. These young men belonged to different religious persuasions in the town and it became our custom to meet together in a band loft to pray and study the Scriptures after all had attended their Sunday evening services. Many were the themes we considered and when the subject of baptism came up I was left in no doubt as to what the Bible taught.

In my search for a place where all God’s Word was taught and practiced, I found a gathering of believers in the Union Street Gospel Hall. The first time I sat at the back observing the Breaking of Bread one Lord’s Day morning, I decided right there it was the nearest thing to New Testament practice that I had seen. That night I told my companions what I had found, something new to me but known to some of them. Before long I was the first of the group to make a move, so I approached the brethren and asked to be baptized. The elder brethren who interviewed me were very gracious, and it was a happy day for me when one of them baptized me at the close of a gospel meeting. Some time later I asked for assembly fellowship and the day I was received was another memorable day in my life. Since then I have never had any reason to doubt that to gather thus is God’s plan for His people.

Being employed as an industrial and commercial artist in Lurgan and Belfast I decided, after much prayer and exercise, to emigrate to Canada where I found employment in the same profession, but it was my desire to serve the Lord where and when that would be possible. With a letter of commendation from the Lurgan assembly I was received into fellowship in the Pape Avenue assembly in Toronto and soon became occupied in the assembly activities. There I met the one who became my wife, Gladys Adams. After our marriage we moved to the East end of the city to the Birchcliff assembly.

In the year 1951, William and Doris McBride, on furlough from Chile, visited our home. Bill said he was interested in getting an “Egypt to Canaan” chart painted; I offered to do it. The lettering on it was all to be done in Spanish, about which language we knew nothing. While working on this, my wife Gladys and I, fully aware of the great need in that land, became interested in the Lord’s work there. To go there would mean a big change in our life-style, but with deep exercise before God we committed our future to Him (Ps 37:4-5).

Shortly after I was saved I bought a little card that cost me a penny. I long since have lost that card but it indelibly impressed on my mind C. T. Studd’s motto and became the language of my heart: “If Jesus Christ be God, and died for me, then no sacrifice can be too great for me to make for Him.” Conscious of God’s call to further service, and thankful for His guidance, we discussed the matter with the elders of the Birchcliff and Pape Avenue assemblies and they most willingly commended us to the grace of God, giving us a letter of commendation to the Lord’s work in Chile, South America, dated February, 1952.