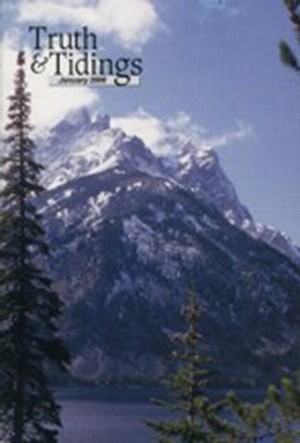 I was born in Edinburgh, Scotland, into a Christian home in October 1978. My parents were both saved when they were young, and my elder brother and two elder sisters had all trusted the Lord Jesus before I was born. This is the story of how God saved me.

Since before I can remember, I was taken to the Sunday school and gospel meeting so that from the moment I was old enough to understand, I understood the gospel and believed it was true. I believed in a God Who was almighty, Who had created the world that I saw around me, Who had made me and knew my every thought and deed. I understood what sin was, I knew I was a sinner and that God hated sin and yet He loved me so much that He sent His only Son to die for me and bear the punishment for my sin at Calvary. In truth, I cannot remember a time that I did not accept that these things were true, and when I started school I felt it my duty to explain it all to the other children who didn’t seem to know anything about the gospel. Yet, at the same time I knew that I wasn’t ready myself, that I had to make it my own.

I didn’t know it then but I realize now how privileged I was to be born into a godly home and to hear the gospel from so young an age. Yet with privilege comes responsibility, and being born into a Christian home never made me a Christian. I was born a sinner in need of salvation, and I thank God that at the age of seven I trusted the Lord Jesus for myself.

Almost every year during the October school break my parents would take us to Machermore Castle in Galloway for our holidays. Machermore is a home that was opened in 1953 by a man called Willie Scott, who had an exercise to care for elderly Christians. In October 1985, we were again at Machermore and on the Sunday evening we attended the gospel meeting in Newtownstewart Gospel Hall, where I was burdened about my need of salvation. What troubled me most was the thought that the Lord Jesus could come at any moment and, if He did, I would be left behind. I don’t remember who was preaching that night or much of what was said except how that in Genesis 4, God accepted Abel’s sacrifice because he came God’s way and that the Lord Jesus said in John 14 “I am the Way…” That night in the cottage that sits in the grounds of the castle I confessed to God that I was a sinner, and I believed the Lord Jesus Christ died for my sin. In His grace, God saved me.

What a wonderful thing it is to know that I am His and that nothing and no one can ever pluck me out of His hand!

In 1990 I was baptized in Mayfield Gospel Hall and later received into fellowship with the assembly of believers that gather there.