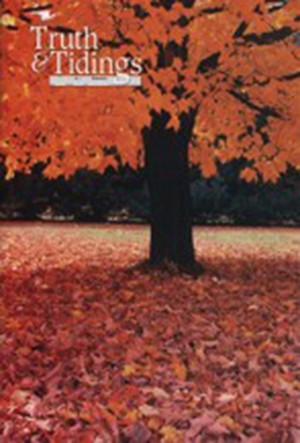 The Mount of Olives has figured much in past history, as we have seen in our meditations. But there is yet an important place for the mount in the history which has still to be written. At the moment that is prophecy, but one day it will indeed be history and there will yet be more “Memories of Olivet.”

It will be remembered that on that day of our Lord’s ascension from Olivet to the heavens, two white-robed angels descended to the mount with the now well-known promise, “This same Jesus, which is taken up from you into heaven, shall so come in like manner as ye have seen Him go into heaven” (Acts 1:11). It was with the promise of His coming ringing in their ears that the disciples left Olivet for Jerusalem with great joy (Luke 24:52). He would return! The rejected Lord would come again!

How we are to interpret the words of the angelic promise may not be clear. Some think that here we have a promise of the rapture of the Church; others prefer to see rather our Lord’s return to earth in glory. In favor of the latter view it does seem that just as a faithful remnant saw Him leave, so an equally faithful remnant will watch for His return. Are we to see here that Jewish remnant of a future day? Again, what exactly does “in like manner” really mean? He left Olivet, so if He returns “in like manner” does this indeed promise a return to the same mount? Perhaps that word of Zechariah would confirm this. “His feet shall stand in that day upon the Mount of Olives, which is before Jerusalem on the east” (Zech 14:4). Here, beyond all question, is Messiah’s return in power and glory, and He will return to the very mount from which He left those many centuries earlier.

Saints of today, of course, wait for the Lord from heaven, “Jesus, our Deliverer from the coming wrath” (1 Thess 1:10 JND). This is our immediate hope, but dark days of vengeance will follow the rapture of the Church, both for Israel and for the nations. Those days will be preceded by a period of relative calm and peace. The world has long waited for someone to take control. It was Paul Henri Spaak, Secretary General of N.A.T.O. in 1957, who said, “We do not want another committee; we have too many already. What we want is a man, a man of sufficient stature to hold the allegiance of all people and lift us out of the economic morass into which we are sinking.” He concluded with the infamous, blasphemous words, “Send us such a man, and be he god or devil we will receive him.”

This awful wish will be granted with the appearing of the man of sin, a man energized by Satan himself (Rev 13:2). He will enter the world arena on a white horse, going forth conquering and to conquer (Rev 6:2). He will be the devil’s counterfeit of the true Prince of Peace, and will conquer at first by deceit and flattery. But the peace will be short-lived. Storm clouds will gather in the north, in the south, and from the east, threatening his supremacy in the west. Deceit will be followed by violence to impose his rule and his influence worldwide. World religion, politics, and commerce will come under his control. He will break the promises made to Israel and will invade their land. His henchman and lieutenant, the false prophet, will set up an image in the temple and demand allegiance to the beast on pain of death (Rev 13:15). A faithful remnant, true to Christ, will wait expectantly for the return of the King. They will read the “Olivet discourse” of Matthew 24-25, and, by following its guidance for them, be prepared to flee for refuge.

Four blocs of nations will eventually converge on Jerusalem. The armies of the northern confederacy, the king of the south, the kings from the east (from the sunrising), and the armies of the beast in the west, will face each other. It will be again as it was in 70 ad, with Jerusalem surrounded. Perhaps the interest of these nations in the land of Israel is secondary. They are opposing each other for world supremacy and since Jerusalem is in the center of the land masses of earth then Israel is the obvious place for the final confrontation. Then, when it seems as if the remnant and the nation will be crushed among them, the King will come, Whose right it is (Ezek 21:27).

His feet shall stand upon the Mount of Olives. The mount will cleave asunder and create a valley of escape for the beleaguered remnant. Three other places are then associated with His coming, Megiddo, Edom, and Bozrah (Isaiah 63:1; Rev 16:16). Edom and Bozrah lie south. Megiddo, from which is Armageddon, is more northerly. Jerusalem and Olivet lie between. In the awful language of Revelation 14:20 there will be blood “even to the horse bridles, by the space of a thousand and six hundred furlongs.” This is the whole length of the land of Israel, from Dan to Beersheba. Messiah will crush His enemies as men crush grapes in a winepress. From Edom through Olivet to Megiddo; from Megiddo through Olivet to Edom and Bozrah, He will triumph.

How precious it is, that when the King comes in power and great glory, He will indeed be Jesus of the Mount of Olives! What memories will fill the hearts of His people on that day! There will be memories of His tears, memories of Bethany and Bethphage, memories of His gracious ministry, memories of Gethsemane, and memories of that moment of ascension when, after about thirty-three wondrous years of His lovely life on earth, He left for glory with the promise that He would indeed return. Memories of Olivet are precious indeed!

Lo! He comes with clouds descending,
Once for guilty sinners slain;
Thousand, thousand saints attending,
Swell the triumph of His train;
Hallelujah!
Jesus comes, and comes to reign.