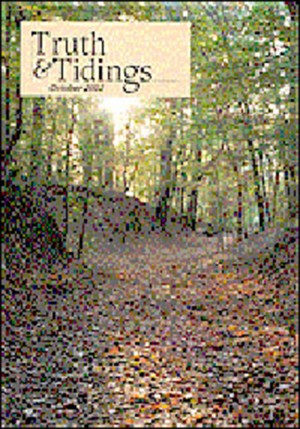 The Holiness of God is demonstrated and taught in many different ways and at many times throughout Scripture. It was experienced by Adam and Eve when they transgressed the one prohibitive commandment they had. It was experienced by Moses at the bush that burned (Ex 3:2), by Israel at the mount (Ex 19), by the seraphim and Isaiah (Isa 6), by Uzzah (2 Sam 6), and by Annanias and Sapphira (Acts 5).

The greatest demonstration of Gods holiness as recorded in the entire Bible is at Calvary. The vileness of our sins required the infinite sacrifice of Gods beloved Son, the Lord Jesus Christ, to satisfy the holy demands of both the Father and the Son. Every believer should rejoice in that tremendous hour where the one pictured in the scapegoat of Leviticus 16:20 bore away our sins, iniquities, and transgressions which were laid on Him by God, unto the “wilderness” of the three hours of darkness, “a land uninhabited.”

God cannot look on sin with any degree of tolerance. Habukkuk tells us that God is “… of purer eyes than to behold evil, and canst not look on iniquity.”

It is very evident today that God is dealing in marvelous grace and mercy, but His holiness has not diminished nor can it ever diminish. We read therefore of the assembly at Corinth, “Know ye not that ye are the temple of God, and that the Spirit of God dwelleth in you? If any man defile the temple of God, him shall God destroy; for the temple of God is holy, which temple ye are” (1 Cor 3:16,17).

There has been much clear teaching regarding the sanctity of the assembly and the sins that can defile it, but only a close fellowship with the Lord resulting in a spiritual condition will give us the ability to withstand sinful temptations or effectively deal with failure.

Sin which requires the action of the assembly must be clearly confirmed in the mouth of two or three witnesses (not by hearsay or rumor). If not clearly established, the report should not be given any credence.

Scriptural Discipline must be carried out with at least four objectives:

1. The honor of Gods holiness upheld.

2. The maintenance of the assemblys purity.

3. The restoration of the erring party.

4. The warning to the assembly as a whole.

There have been many articles written regarding assembly discipline and we would recommend the reading of Mr. Normal Crawfords article, “Assembly Discipline” in his book “Gathering Unto His Name.” Please pardon any repetition this article will inevitably contain.

A. Discipline as the Result of Sinning Against a Brother, Matthew 18:15-20

It should be noted that this is not some minor thing that is said or done. Some people are characteristically blunt, lacking thoughtfulness. Particularly stressful circumstances may also contribute to actions which would not be the norm for an individual. In the case before us, there is a definite missing of the standards of the Word of God. We surely must make allowance for personality traits and fleshly failure because “in many things we offend all”(James 3:2).

The steps to be taken by the brother or sister who has been harmed are quite clear in Matt 18. The first step is a meeting of the two individuals, “between thee and him alone,” and to privately seek with determination to resolve the problem. When this step in Gods order is circumvented, the next steps probably will not accomplish the desired results. When there is a proper humbling and prayerfulness prior to and at the first step, the next steps will not likely be necessary.

If the next step is necessary, the one harmed is to take one or two more with him or her to visit the person. It seems clear under these circumstances that this would require mature men with spiritual experience and a balanced temperament, thus likely the assembly elders should be invited to accompany the harmed person. There would be a keen desire on the part of all that the issue be resolved at this step that the “leprosy” spread no further.

B. Assembly Discipline to Deal with Moral Evil, 1 Corinthians 5:1-13

All discipline is carried out with a view to recovery and happy fellowship with God and the assembly. From time to time, grave moral evil occurs and must be dealt with as leaven. We will look at these evils in the order they are recorded in verse 11 of 1 Corinthians 5.

The fornicator – The act of fornication in all its forms – pre-marital or extra-marital intercourse, homosexuality, or beastiality – requires excommunication from the assembly. Where possible, if two parties are involved, and they are professing Christians, confession from both parties would be advisable. The reason this is recommended is that we have heard where untrue confessions have been made with untold damage to persons and families over something that was found years later to be untrue.

The covetous person – Extreme care must be exercised in dealing with this; the last thing godly elders wish to do is to propose the extreme forms of discipline if not justified. Under the charge of a covetous person would be one whose action led to a conviction of fraud or theft, or one who had confessed to such action. The Christian in the assembly should be upright and honest on travel expense reports and time cards, and he should not be involved in casinos or lotteries. Elders need wisdom in handling cases like these because young Christians may do things in their ignorance, or do things of an insignificant nature which in this writers view require no assembly involvement.

Covetousness of a sexual nature will likely lead to sin as David and Samson learned to their sorrow.

The idolater – This is the act of bowing down to an idol which would have been the past habit of at least some at Corinth.

The railer is a person who repeatedly and deliberately tries to ruin the reputation of a person or persons. It is the attempted assassination of the character of those in divinely constituted authority or of other believers (2 Sam 16:5-8; Jude 8, 9; 2 Peter 2:10-12). It has more to do with a habitual attack, not so much on the conduct but on the character of the person, although conduct eventually defines character. For example, it may be true to say a person tells lies, but to call him a liar means he is included in the list of Revelation 21:8. In relation to railers, the same word is translated “revilers” in that terrible sentence of 1 Corinthians 6:10. Shimei in 2 Samuel 16:5-8 called David a “bloody man” thus defining Davids character in Shimeis view. David was involved in many a battle, in most cases at least ordered by God Himself in which much blood was shed. This did not make him in character a bloody man. Shimei suffered as a result of this railing.

Thank God true railers are scarce, but evil speaking can be a plague amongst us. Railing is very evident in the world against those in government positions or authority, but our example must not be derived from the world.

The drunkard is one who on certain occasions is drunk. This has results in the ridicule of the gospel and of other godly Christians by association. This has been a blot on some assemblies, even if the person only attends the gospel meetings infrequently. We are, however, not responsible for those without and God will look after the testimony in relation to them. Those that are drunkards and in the assembly must be put away.

The extortioner is one who swindles other people of their possessions. Older people are being preyed upon by extortioners, and recent newspaper accounts tell of millions being lost in this way by pensioners.

Anyone in assembly fellowship who stoops to such base practices must be put away from the assembly.

Doctrine which speaks of the person of Christ, His work, and the glorious gospel which has been preached for centuries must be contended for. Any teacher that preaches a doctrine that is in error in relation to Christs eternal Sonship, His deity and true humanity, His sinless life in every aspect, His death, burial, and bodily resurrection must be dealt with. Such doctrines as salvation by grace alone through faith alone in Christ alone must be re-emphasized. Such error as the falling away doctrine or in more current terminology, the “walking away” doctrine, an old error revived, which such men as Jonathan Edwards taught against, must be dealt with as the error it is in relation to the high priestly work of the Lord Jesus Christ as well as His work as an advocate.

The days are darkening rapidly. May God give us the much needed wisdom, grace, and strength to act according to His Word and for His glory until we hear the shout!