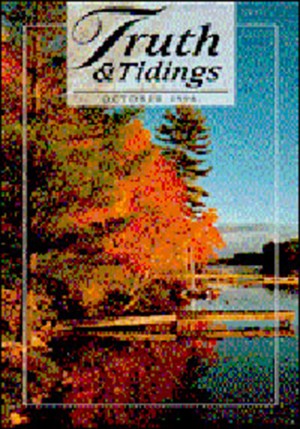 The Law of the Leper

As we approach the third millennia A.D., perhaps the seventh of history, does this indicate that the Lord’s coming is imminent?

The proof that the Lord is coming soon is that “Jesus died and rose again” (1 Thes 4:14). Although future events cast their shadows before them, we should never look for events or dates, but for the Lord Himself. Paul twice included himself among the living at the rapture (1 Cor 15;1 T’hess 4). He taught that it is an any moment event. This truth has had sanctifying and satisfying power in the lives of first century and present century saints. Paul and all these believers were wrong if it was necessary to wait for 2000 AD to begin the millennium. Peter taught that God is beyond time, not that there is a 2000 year period between the advents (2 Pet 3:8). The best of chronologies makes 1996 the 2000th year since the birth of Christ.

In spite of Scripture’s strong warnings, men still set dates. The Lord could come at any moment and this has been true ever since He went back into Heaven. “Yet a little while, how short, The Coming One will come”

How should we evaluate “signs of the times”?

The context of discerning “the signs of the times” (Matthew 6:3) is Jewish, referring to prophecies of the Messiah. Some prophecies were fulfilled by His incarnation and ministry Others will be fulfilled at His coming to establish His millennial reign. “Signs” and “times ‘ relate to God’s prophetic program for Israel. The church and its hope are not governed by these, although, while awaiting our Deliverer from that coming wrath (1 Thessalonians 1:10), we are cognizant of God’s preparation for the fulfillment of these prophecies. Rather than causing us to set dates, our awareness of prophecy helps us to live and teach in keeping with the spiritual needs of the declining hour. Knowing God’s coming judgments on the world system confirms our need to separate from it. Daily looking for our Deliverer will increase sacrificial loyalty to His Name.

When God deals with different people in different times, do His dealings ever overlap?

“Unto the King of the ages,… be honor and glory unto the ages of eternity” (1 Timothy 1:17, Newberry), indicates that the Sovereign of the universe has designated distinct ages and He controls and dispenses all in all the ages. Such principles as repentance, faith, and submission to God abide in every dispensation. Likewise, the gospel of the grace of God in this age and the gospel of the kingdom in a coming age are both founded on atonement. How God works distinguishes these periods. Since the Church is a wholly new entity and not an extension of Israel, each has its own peculiar and distinct dealings from God. In the present age, God is forming the Church. When this masterpiece is complete, God will deal with the nation of Israel in a distinct way Although God’s ways are always consistent with each dispensation, events in one age can foreshadow events in the succeeding age. We may be observing events today that foreshadow prophetic scriptures yet to be fulfilled. To borrow from another, “If it were not that we knew that the clock of prophecy cannot commence until the Church is raptured, we would have thought it had already commenced.” “How unsearchable are his judgments, and his ways past finding out” (Romans 11:33)!

Does the Bible teach that Israel will never again be removed from its land?

The promises to Abraham concerning the Land make it clear that it will be Israel’s forever. The Scriptures show that this promise will be made good when Christ returns in glory and the Spirit is poured out on the nation (Luke 21:24; Matthew 24:31; Isaiah 32:15-20; Jeremiah 30:4-11; 31:31-37; 39:25-29; Micah 4:4-7; Joel 3:20; Zechariah 8:3-8). The Land’s being theirs eternally does not necessitate its being theirs permanently now. They have returned in unbelief. The recovery mentioned in Deuteronomy 30:1-6 is dependent upon confession and restoration. The recovery of Isaiah 11:11 is simultaneous with “that day,” mentioned earlier in the chapter. Neither condition has been fulfilled in the current “regathering” of Israel to the land, therefore this may not be the prophesied regathering. A principle of prophecy is that God gives foretastes of a fulfillment before the actual fulfillment.

Israel must be in the land to fulfill the terms of Daniel’s 70th week, but we have no Scriptural authority relating this to those currently there. Believers should not be shaken if Israel were driven into the sea, as the Arab nations have long threatened.

“After these things” (4:1 JND), when John was caught up to heaven, as the Church will be, begins the section of the book described by the identical words, “the things…after these’ (1:19 JND). The identification of the 144,000 in this section precedes the winds of trouble that will “hurt the earth” (7:1,2). Considering that references to the 12 tribes are always literal, that “12,000” is so often repeated (7:5-8) and must therefore be literal, and that the Bible itself interprets prophecy literally, these 144,000 must be Jews, from the actual 12 tribes. These same 144,000 (14:1-5) are with the Lamb on Mount Zion (not heaven) and learn on earth the song sung in heaven.

Their identification follows the rapture. Their preservation spans the tribulation time. Their sphere is earth. They cannot be the elite Gentile witnesses who, according to the Watchtower Society, will be the only “believers” in heaven from this age.