Naaman’s bags were packed for Samaria. His luggage included some heavy objects – nearly a thousand pounds of silver and gold. He would be more than willing to hand it over as payment for the miracle he desperately needed and which he hoped to receive from Elisha, a prophet of the Lord.

Upon arrival, Naaman received some rather bizarre instructions from Elisha’s servant, ordering him to dip seven times in the muddy Jordan River and he would be healed. Surprisingly, no financial demands were made or even discussed, just simple directions given as to how Naaman could be cleansed. Initially furious over Elisha’s refusal to show his face or to wave his hand over the leprous area, Naaman obeyed the prophet’s word, and his healing was immediate.

Returning to the prophet’s house with a cleansed body and a grateful heart, Naaman was ready to pay. Standing before Elisha, he said, “Behold, I know that there is no God in all the earth but in Israel; so accept now a present from your servant” (2Ki 5:15).[1] But the prophet refused payment – God’s grace is free. Elisha wouldn’t want Naaman heading home thinking that he had purchased God’s saving power.

But one of our favorite gospel stories is not quite finished. Gehazi, Elisha’s servant, was already greedily making plans as to how he could get his hands on the money. Waiting until the parties had dispersed, Gehazi ran after Naaman’s entourage and enacted his hurriedly crafted plot. He informed Naaman that Elisha sent him with the following message: Two young prophets had just arrived from Ephraim and stood in need of silver and clothing. Naaman gladly obliged and had his own servants transport the heavy gift just outside Gehazi’s dwelling. Gehazi sent the servants away and took the goods inside. It seemed that his plan had worked.

Returning to his master, Elisha asked him, “Where have you been, Gehazi?” He responded with an outright lie, “Your servant went nowhere.” But Elisha knew everything and told Gehazi all that he had done. Gehazi should’ve known that lying to a prophet to whom the Lord reveals things was futile. The sad story ends with the pronouncement of Gehazi’s sentence: “Therefore the leprosy of Naaman shall cling to you and to your descendants forever” (v27).

The story highlights a number of sobering lessons which we would do well to take to heart.

Jesus instructed us that serving both God and money is impossible (Mat 6:24). Gehazi’s speech gave the appearance that he was serving Elisha, and therefore serving God, but his greedy actions betrayed the reality that he was actually money’s servant. The consequences for such behavior extend far beyond this life. Not to mention the sobering prospect of having to give an account to the Lord for lies, hypocrisy and other sins which may accompany greed, we, like Gehazi, will miss out on accumulating for ourselves treasures in heaven when money is our master. Gehazi may have stored the stolen treasure in his earthly dwelling, but in so doing, he missed an opportunity to store up treasure in a heavenly dwelling (Mat 6:19-21). He chose to serve the wrong master. It’s either God or money, but it cannot be both.

The Power of Rationalization

Once we allow greed to overtake us, there’s no end to where it will take us. Gehazi may have rationalized his behavior in a number of ways. Perhaps he told himself that Naaman, who had raided and stolen from the Jews repeatedly, should appropriately return some of the wealth he had improperly accumulated. Maybe he rationalized that Elisha was holding Naaman back from expressing his gratitude. After all, is it not fitting that God should be acknowledged with such a gift? Or perhaps even more brazenly, he dared to believe that Naaman owed him something for whatever role he had played in his miraculous cleansing. Gehazi’s later lie would have Naaman thinking he had helped two prophets who were in real need. What’s so bad about that? The power of rationalization to transform greed (or any sin) into acceptable behavior is staggering! It’s no wonder that Jesus warned us, “Watch out and guard yourself from all types of greed” (Luk 12:15 NET).

The Leprosy of Greed

By the story’s end, Naaman and Gehazi have traded places. The pagan who humbled himself to obey God’s word through Elisha found healing. The servant who disrespected God’s word through Elisha received judgment. Ironically, the words of Gehazi proved to be as prophetic as his master’s words often were. He told himself, “As the Lord lives, I will run after him [Naaman] and get something from him” (2Ki 5:20). But what he received was far more than he expected. Gehazi got only a fraction of Naaman’s wealth but all of his disease! Fittingly, one of leprosy’s effects, loss of feeling, would attach itself to Gehazi for the rest of his days. He had already allowed greed to render him insensitive to God’s word.

In our selfish pursuits to amass wealth at any cost, we may obtain far more than we counted on. Although we may seize earthly treasure in the process, greed, like leprosy, clings to us and renders us increasingly insensitive to God’s Word, God’s Spirit and sin’s grip. Drastic action is needed to save us from the leprosy of greed: “Put to death whatever in your nature belongs to the earth … greed” (Col 3:5 NET).

The consequences for Gehazi’s behavior were generational: “The leprosy of Naaman shall cling to you and to your descendants forever” (2Ki 5:27). His greed, like Achan’s (Jos 7:24-26), affected future generations, proving the words of Proverbs 15:27 to be true: “Whoever is greedy for unjust gain troubles his own household.” The generational effects of any sin, including greed, are devastating. Christian parents who demonstrate covetous behavior should not expect their children to be immune from the ramifications. Often the behavior is perpetuated or tragically causes the children to abandon the principles of Scripture altogether because of the hypocrisy they witnessed. The leprosy of greed is disastrous.

The next time you’re tempted to seek an unfair gain, remember the story of Gehazi. “Better is a little with righteousness than great revenues without right” (Pro 16:8 KJV). 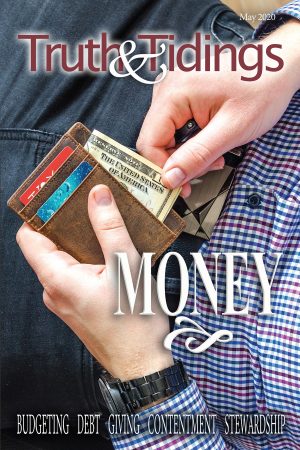