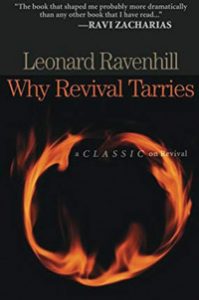 “The tragedy of this late hour is that we have too many dead men in the pulpits giving out too many dead sermons to too many dead people.” Similarly cutting barbs are the norm in this strikingly current 1959 collection of 20 essays. Set aside for a moment the difficulty of living out faith; of putting on Christ – merely reading Ravenhill as he assesses our attempts to live for God is enough to get your hackles up. Sensitivity was evidently not a central Ravenhill characteristic. Instead, Ravenhill unsheathes his sword, points it directly at your chest, and critiques Christianity’s preaching, prayer and priorities. More accurately, Ravenhill castigates the motives, apathy and sub-celestial propensities that serve as backdrops to my so-called Christian life.

Ravenhill heaps great quantities of blame on the shoulders of leaders but also speaks (sometimes redundantly, sometimes tangentially) to individuals of all kinds: the new believer not fully surrendered, the jaded older believer, the frenzied forty-something. Rarely, if ever, does he employ positivity, preferring instead to allow blunt-force trauma to carry out his mission.

“Friend, if you were as good at soul-cultivation as you are in developing your business, you would be a menace to the devil; but if you were as poor in business matters as you are in soul, you would be begging for bread.” Chastened in the earliest pages, it’s tempting to toss Why Revival Tarries overboard in self-defence; far better to tolerate the lofty expectations of a deft essayist.

The Rapture: Where, Why and When
Petterson, David

Attributes that Anchor Us: God is Merciful
Barnhardt, Paul

Why I Am Not Reformed: Conclusion
Cain, Matthew