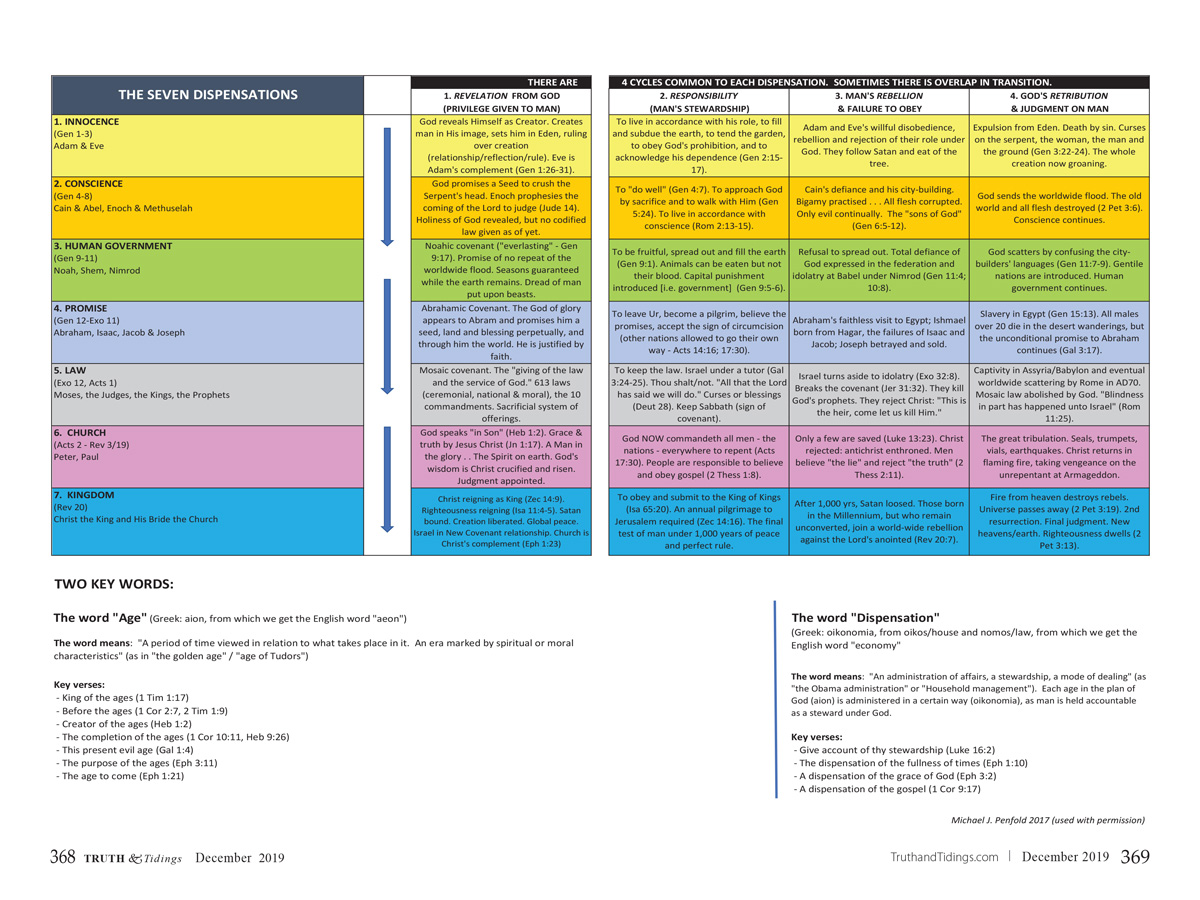 The Bible, while not primarily a history book, provides a comprehensive, sweeping panorama of the unfolding of time, beginning with a man placed in a garden by God, and ending with countless throngs dwelling in a perfect setting with their God. In between, the Bible describes a God who speaks to man in many ways and in differing circumstances, and man’s response to these communications.

Have you ever pondered the meaning of this whole saga? What is creation’s purpose? Does history have an overarching theme or aim? How do we understand the obvious differences between the way the Lord communicated with Adam in the garden, with Abraham in Ur, with Moses on Mount Sinai, with his disciples on the slopes of Olivet, and with us as His people today? Why is it that God’s people in the wilderness could only approach God through the intermediary of a functioning priesthood, while we access a heavenly sanctuary without restriction, coming with confidence to a throne of grace?

These and other questions form the background to this series of articles in which we will seek to outline the biblical truth of The Dispensations. We will examine God’s overall purpose in all that He is doing, the various ways He has revealed this purpose to man in a progressive way over the scope of human history, and the corresponding appreciation this should give us of the wonder, wisdom and glory of our matchless Lord.

The purpose of these articles is not to provide a history of dispensational thinking, nor is it to defend Dispensational Theology against the competing approach of Covenant Theology or other systems of biblical interpretation. Rather, these articles will examine the chronological unfolding of divine revelation over the scope of the biblical record and the corresponding implications of this revelation for mankind.

W.E. Vine states that this word “signifies a period of indefinite duration, or time viewed in relation to what takes place in the period. The force attaching to the word is not so much that of the actual length of a period, but that of a period marked by spiritual or moral characteristics.”

It is clear, then, that from a scriptural perspective, history is not simply a continuous succession of random events. Rather, it has been marked by specific eras or periods, characterized by particular features, spiritual conditions and moral characteristics.

The word “dispensation,” while not having direct reference to a time period, refers to the way God has communicated and interacted with man throughout the various ages in history. The word has the concept of administration or stewardship or order. It is the idea of a household where there is an owner who delegates responsibility or stewardship to those in his household, and then holds them accountable for the way in which they discharge their stewardship.

“Dispensational Truth” is a recognition that God has dealt with man in discrete identifiable ways throughout the scope of history. In each of these ages or eras, there have been specific communications or revelations from God, specific expectations placed on man and specific repercussions when man has failed to meet the requirements of his stewardship.

Features of Each Dispensation or Age

There are four specific characteristics evident in each of the changing eras of God’s dealings with man. These have been distilled by Mark Sweetnam in his excellent book entitled The Dispensations – God’s Plan for the Ages as:

Revelation – each successive era begins with a fresh revelation or communication from God. This can be traced, for example, in His instructions to Adam, His promises to Noah, His call to Abraham, His pronouncements to Moses, and His direct communication “in Son” when the “Word became flesh and dwelt among us” (Joh 1:14). Still future will be His universal dominion when He returns as King of Kings to reign directly over His universe.

Rebellion – Man has failed in every era to measure up to the requirements presented by divine revelation. In a garden of perfection that God declared “very good,” Adam failed miserably and plunged a race into despair through his disobedience. In a coming day, even when a King reigns in righteousness, there will be sufficient resentment in the hearts of fallen men that when Satan is released at the end of 1000 years, he is able to mount a futile rebellion against the King. In every era in between, there is a constant thread of man’s failure.

Retribution – In His perfect justice, God’s response to man’s rebellion and failure is inevitable. Every era in history has ultimately been punctuated by divine judgment.

Careful consideration of the overall history outlined in Scripture reveals seven “cycles” of the above features, beginning with God’s first communication to the original man Adam, and culminating in God’s direct revelation in the “second man” (“the last Adam”), when He takes the sceptre of universal dominion and reigns over the earth for 1000 years. These seven dispensations have been displayed in simplified form on the accompanying chart.

One of the criticisms leveled (unfairly) against Dispensational Truth is that it artificially parses up human history into segmented periods, rendering God’s communications inconsistent and incoherent, and providing different ways of salvation for different periods of time. This allegation is untrue. Dispensational Truth in no way attacks the immutability of God, nor does it do injustice to the universal principles that have always, and will always, govern his interaction with His creature man.

In the next article we will look at some of the unchanging features that run unmistakably like unbroken threads through every dispensation, and learn how God is ultimately “working all things after the counsel of His own will” (Eph 1:11) to manifest the glory of His unchanging character through changing circumstances and progressive developments throughout the course of human history.

Attributes that Anchor Us: God is Good
Thiessen, Paul

When Worlds Collide: Life and its Priority
Higgins, A. J.

Why I Am Not Reformed (4): Calvinistic Excesses
Cain, Matthew

The Believer’s Mind (3): A Change of Mind in Romans (1)
Black, Jonathan

Q&A Forum: A Ransom For All
Cain, Matthew