Last month, we looked at what Christians have as a result of the resurrection – things that are true of all of us by virtue of the fact that we are believers. However, the resurrection also makes practical demands on our daily lives, and this will be our consideration here.

All the Scriptures we will refer to were written by Paul. Several of them are deeply personal, relating to his particular circumstances. However, this does not lessen their application to us, for what was true of him should also be true of us.

The Distinctiveness of a Believer’s Life

In Romans 6:4 we read “like as Christ was raised up from the dead by the glory of the Father, even so we also should walk in newness of life” (KJV). Christ’s resurrection brought about a big change for Him, and there has been a big change for us also. The word “newness” refers, not to that which is new in time, but new in quality. Thus, Paul is contrasting the life which we now live with the pre-conversion life. As the ensuing discussion confirms, he is stressing the outworking in our lives of the change. “That henceforth we should not serve sin” (v6). This new “walk” began, not at baptism, but at conversion. It was in our baptism we publicly declared it. We have a solemn responsibility to live a life distinct from that which we lived before.

The Direction of a Believer’s life

In the days before we trusted Christ, we lived for self, but this is no longer so: “He died for all, that they which live should not henceforth live unto themselves, but unto Him which died for them, and rose again” (2Cor 5:15, KJV). The fact that He died for us shows that we owe it to Him to live for Him. But, while we could honor the memory of someone who had died, and remained dead, we could not live “unto” such a one. However, the One Who died rose again, so we have a living Savior to live for. The direction of service in our lives has totally changed. It is no longer unto self, but unto Him.

The Desires of a Believer’s life

What should we strive for in this life? The answer is seen in our identification with the Risen One. “If ye then be risen with Christ, seek those things which are above, where Christ sitteth on the right hand of God” (Col 3:1, KJV). Since we have been raised with Him, and He is now seated in heaven, that is where we ought to set our hearts and minds – on “things above, not on things on the earth” (v2). How easy it is to be taken up with the things of this life, but our blessed Lord and Savior is at God’s right hand, and we should make the things of Christ, and where He is, the focus of our lives.

The Dynamic of a Believer’s Life

In Ephesians 1, Paul writes of “the exceeding greatness of His [God’s] power to us-ward who believe,” and he outlines the events which demonstrate it. “Which He wrought in Christ, when He raised Him from the dead, and set Him at His own right hand in the heavenly places” (Eph 1:19-20, KJV). This power has already been demonstrated in us; we were made alive when we were “dead in trespasses and sins” (2:1, KJV ). However, Paul is not just speaking of what this power did for us in saving us, but of what it is still doing for us, as a later reference in the book shows. “Now unto Him that is able to do exceeding abundantly above all that we ask or think, according to the power that worketh in us” (3:20, KJV). It is a present reality in our lives.

The Development of a Believer’s Life

Last month, we considered Romans 7:4. “Ye also are become dead to the law by the body of Christ; that ye should be married to another, even to Him who is raised from the dead, that we should bring forth fruit unto God” (KJV). It is the last part of this verse which is pertinent to this month’s discussion, “That we should bring forth fruit unto God.” There ought to be brought forth in our lives, increasingly, that which is pleasing to God, that which is the fruit of the new relationship into which we have entered, that which is the opposite of the “fruit unto death” (v5) which characterized us in our unregenerate state. What enables it to take place is the truth that we are joined to the One Who “is raised from the dead.”

The Display of a Believer’s Life

“For we which live are alway delivered unto death for Jesus’ sake, that the life also of Jesus might be made manifest in our mortal flesh” (2Cor 4:11, KJV). The constant dangers to which Paul was exposed, and how he was sustained through it all, powerfully displayed the truth that, not only had Christ died, but that He was alive again. While this reference is specific to Paul’s personal circumstances, what he says of himself should also be true of us; our lives are a manifestation of the reality of the resurrection life of Christ.

The Destination of a Believer’s Life

Paul states the ultimate aspiration of his life down here: “That I may know Him, and the power of His resurrection, and the fellowship of His sufferings, being made conformable unto His death; If by any means I might attain unto the resurrection of the dead” (Phil 3:10-11, KJV). Paul is not speaking of attaining the future physical resurrection, but of his desire to reach his goal: to live, here on earth, a life fully consistent with the reality that he has been raised with Christ. He had not yet attained this goal (vv12-14), and he exhorts his readers, likewise, to strive toward it (vv15-16). This exhortation comes right down to us, today. How practical and challenging is the reality of the resurrection. 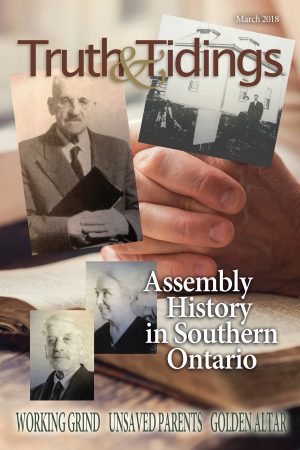