In 1967, the French literary critic Roland Barthe published an essay called The Death of the Author. This essay became one of the foundational texts of postmodernism. In it, Barthe argues that, once a text is written, it passes out of its author’s control, and that it is pointless to try to fix the meaning of a text by asking what the author meant it to say. In fact, Barthe argued, the idea that any text has a single “correct” interpretation is itself wrong. Each reader understands the text in his or her own way, and no understanding has a greater claim to validity than any other understanding. For most of his essay, Barthe concentrates on the implications of this idea for literary criticism. It is only towards the end that the mask slips, and we discover Barthe’s real target: “Thus literature … by refusing to assign to the text … an ultimate meaning, liberates an activity which we might call counter-theological, properly revolutionary, for to refuse to arrest meaning is finally to refuse God.”

However much we might disagree with the rest of Barthe’s argument, his logic here is irrefutable. If there is no such thing as truth, then there is no Divine Author – God cannot exist. And, as a corollary to this, if God does not exist, there can be no objective truth. This latter point is worth emphasizing, for it highlights the difficulties faced by those who deny the existence of God, but who still recognize the existence of moral standards, of right and wrong. If you dispense with a God Who is the fixed point for a moral order, you no longer have a coherent means to define right and wrong. You can have relativism or God, not both. The existence of God and the existence of truth are inextricably linked.They are two sides of one coin.

This relationship between God and truth is very clearly outlined in 1 Timothy 2:1-6. In these verses, Paul exhorts that all men should be prayed for because, “this is good and acceptable in the sight of God our Savior; Who will have all men to be saved, and to come unto the knowledge of the truth. For there is one God, and one mediator between God and men, the man Christ Jesus; Who gave Himself a ransom for all, to be testified in due time” (KJV). We rightly love these verses for their clear statement of the scope and scale of God’s desire that all men be saved. We should feel, perhaps more than we do, their challenge to the often-limited horizons of our prayer life. But we should not miss the force of Paul’s argument about truth, for it is the goal of this passage. It is God’s will that all should be saved. It is also His will that all should “come to the knowledge of the truth.” Not to the knowledge of a truth, or of truths, or even of truth, but of the truth, distinct, objective, and unique.

We do well to be clear on this. Apologists for religious toleration often ground their appeals in the statement that we all worship one God. In particular, it is often claimed that Christians and Muslims worship the same God. This is false, and a downright diabolical lie. The God of the Bible is not the god of Islam, of Hinduism, or of Buddhism, He is not the universe, or the cosmos, or any of the other concepts that men, blinded by their sin, enthrone and worship as gods. He is “the only true God” (John 17:3, KJV), and it is only in the Person of His Son, the Lord Jesus Christ, that He can be known. God is the source of truth, and Christ is the revealer of truth.

Barthe was right – the existence of truth depends on the existence of God. It also depends on the character of God. Thus, in Titus 1, He is presented to us as “God, that cannot lie.” The word translated by the phrase “that cannot lie,” is an interesting one. It occurs only here in the New Testament, and is an adjective whose force it is difficult to capture in English. It presents God to us, not just as unlying, but as “unlie-able.” In this, He stands in contrast to the standards of Cretan society, for the Cretians, Paul reminds us “are always liars” (v12, KJV). Moreover, he stands in contrast to Zeus, who was especially venerated by the Cretians (not least because they believed him to be buried on Crete) and whose unsavory legend included acts of gross deception and dishonesty. Paul, as he provides us with a four-verse, one-sentence overview of the history of revelation, reminds Titus that this is not what God is like. Rather, the revelation on which Paul’s apostleship was based (the faith and the truth), and with which it accorded, had its origin with the “unlie-able” God, Whose eternal promise is now manifested in the preaching that has been committed to the apostle by “God our Saviour.”

Barthe and his fellow theorists thought that their ideas would bring liberation, freeing the world from the idea of an autocratic deity. In reality, these ideas have been anything but liberating, for they have brought us into bondage. Every subjective, ill-informed opinion now demands our attention, and claims the status of authoritative fact. But we do not need to join the confused cacophony of contemporary society, for in the quagmire of relativism, there is a sure place for our feet to stand, and a bright beacon of light to dispel the dreary greys of a world without truth. The “unlie-able” God has spoken in His Son, and it is still His will that all should be saved and come unto the knowledge of the truth. Barthe is dead, but God still lives and “blessed be His glorious Name for ever: and let the whole earth be filled with His glory; Amen, and Amen” (Psa 72:19, KJV). 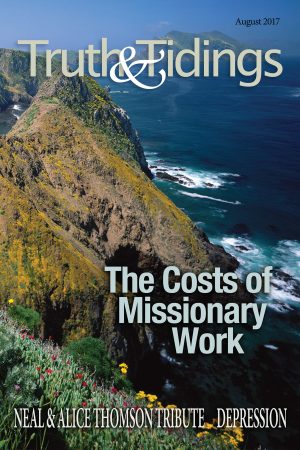