That the resurrection of our Lord Jesus Christ is a fundamental part of what we believe is evident from many Scriptures, and none more so than 1 Corinthians 15, which we will consider together this month. There were those in Corinth who denied that people will rise from the dead, and Paul writes to counter this false teaching by setting forth the resurrection of Christ.

He begins by summarizing the message he preached when he first came to Corinth: “Moreover, brethren, I declare unto you the gospel which I preached unto you, which also ye have received, and wherein ye stand” (v1, KJV). Of the content of that message we are not left in doubt: “that Christ died for our sins according to the Scriptures; And that He was buried, and that He rose again the third day according to the Scriptures: And that He was seen …” (vv3-5, KJV). Clearly Paul viewed the resurrection as an integral part of the gospel message, and the Corinthians received it as such (v1).

In these opening verses, Christ’s resurrection is declared together with His death, and not in a subsidiary sense. Indeed, they are on an equal footing, when Paul says that both are “according to the Scriptures.” The Old Testament not only foretells His death (for example, in Isaiah 53 and Psalm 22), but also His resurrection. An example of such a passage is Psalm 16:8-11, as Peter shows in his message on the day of Pentecost (Acts 2:25-32). So the resurrection is essential, not only because it is in the New Testament, but – going back even earlier – because it is the subject of Old Testament prophecy.

Paul goes on to give the Corinthians several points that show how vital the resurrection is, and he does so by demonstrating what the situation would be if Christ had not been raised. In the space of a few verses, he makes at least five powerful arguments.

First, “If Christ be not risen, then is our preaching vain, and your faith is also vain” (v14, KJV). The word rendered “vain” here means “empty.” It is sometimes translated such, for example, when a servant was sent to receive of the fruit of the vineyard, the husbandmen “caught him, and beat him, and sent him away empty” (Mark 12:3, KJV). In verse 14, when speaking of “our preaching” and “your faith,” Paul is referring to the same thing, from two different standpoints. “Our preaching” is the content of the message that he preached, rather than the act of preaching. “Your faith” draws attention, not just to the fact that they believed, but to what they believed. So, if Christ has not risen, the message he and the other apostles preached, which the Corinthians believed, has nothing of substance. It is a lot of talk, but devoid of anything worthwhile. Take out the resurrection, and we have nothing to preach or to believe.

We will move down a few verses for the next point, as it looks similar to the first, but there is a difference: “If Christ be not raised, your faith is vain; ye are yet in your sins” (v17, KJV). The word “vain” here is a different word, and emphasizes not so much the content of the message as the result that it produces. What is the result of faith; of believing the gospel message? Paul has already told them: “By which also ye are saved” (v2). But if Christ has not risen, then this is not the result of believing. Indeed, there is no result. He states it bluntly: “Ye are yet in your sins.” There is no such thing as salvation from sins, if the resurrection never happened. We still stand before God in our sins, subject to His righteous judgment.

This leads on to a third point. The situation is bad for those who are still alive, but what of those believers who have already died? The stark answer follows: “Then they also which are fallen asleep in Christ are perished” (v18, KJV). If Christ has not risen, then those who believed the message and have since died are not “with Christ; which is far better” (Phil 1:23, KJV). On the contrary, they have “perished.” They are lost forever, without hope, experiencing not only the horrors of hell, but the anguish of knowing that they put their faith in a message that was false.

Paul can now make a fourth point. “If in this life only we have hope in Christ, we are of all men most miserable” (v19, KJV). If Christ has not risen, then our “hope” (so-called) has nothing beyond this life. And that makes us the most pitiable people in the world. There are plenty of reasons why, and the context points to one. If the message we have believed is false, then we are deceived and deluded, and are in for a huge disappointment when we die, whereas those who have refused to believe it are right, and will ultimately be vindicated. The resurrection is not an “optional extra.” It makes the difference between us being either the most blessed people in the world or the most wretched.

Finally, in verse 15, speaking of himself and the other apostles, Paul writes: “Yea, and we are found false witnesses of God; because we have testified of God that He raised up Christ: Whom He raised not up, if so be that the dead rise not.” Paul has already stated (vv5-8) that he and the apostles (and many others) have seen the risen Lord, and they are bearing witness to that. However, if Christ has not risen, their testimony is false, and, not only can we not believe the gospel they preached – we cannot depend on anything they said, or wrote. In other words, we cannot believe our Bible.

We are left in no doubt. The resurrection of Christ is central to all that we believe. We can sense the relief in Paul’s words: “But now is Christ risen from the dead” (v20, KJV). And we can be sure of this, as we will see next month, Lord Willing. 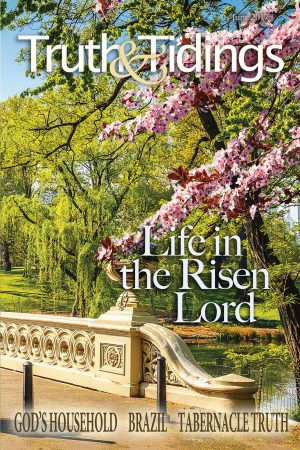