We are thinking about blessings, directly attributed in Scripture to the death of Christ, into which, as believers, we came at the moment of conversion. Having looked at redemption and righteousness, we now turn to:

In Paul’s letter to the Romans, redemption – “the redemption that is in Christ Jesus: Whom God hath set forth to be a propitiation through faith in His blood” (3:24-25), and the righteousness – “being now justified by His blood” (5:9), is clearly stated to be directly consequent upon His death. So also is reconciliation. “When we were enemies, we were reconciled to God by the death of His Son” (5:10).

W. E. Vine explains that the verb most commonly used in the NT for “to reconcile” means “of persons, to change from enmity to friendship.” The corresponding noun (again, according to Vine) denotes “a change on the part of one party, induced by an action on the part of another; in the NT, the ‘reconciliation’ of men to God by His grace and love in Christ.”

Often, when two “parties” are not in a state of peace, it is said that “there are faults on both sides.” Both bear some responsibility for the cause of the problem, and each has a measure of ill will toward the other. It cannot be too strongly emphasized that, when it comes to God and man, this is not so. The fault and the enmity were totally on our side. And the initiative to resolve the situation was totally on God’s side: “Herein is love, not that we loved God, but that He loved us, and sent His Son to be the propitiation for our sins” (1John 4:10).

The details of this work of reconciliation are  given in the last few verses of 2 Corinthians 5, where Paul mentions it in one of its forms (“reconciled,” “reconciling,” “reconciliation”) no fewer than five times in the space of three short verses. Paul makes it clear that it is Christ and His work which forms the basis on which reconciliation is possible: “God was in Christ, reconciling the world unto Himself” (v19). Paul is not merely stating here that God was “in Christ,” but rather that it is in the person and work of Christ that He has brought about reconciliation. That it is His work at Calvary to which he is referring is beyond doubt: “For He [God] hath made Him [Christ] to be sin for us, Who knew no sin; that we might be made the righteousness of God in Him [Christ]” (v21).

In verse 19, Paul vividly brings before us the great mercy of God in His work of reconciliation. He was “reconciling the world unto Himself, not imputing their trespasses unto them.” When He sent His Son, He would have been perfectly righteous in confronting a guilty world with its wrongs, and exacting vengeance. But that is not what He did. On the contrary, by making His Son to be sin for us, He brought about conditions whereby He can offer terms of reconciliation to the world. This is grace indeed!

One can see a parallel with John 3:17:  “God sent not His Son into the world to condemn the world; but that the world through Him might be saved.” Though the world deserved condemnation, God sent His Son to save it; though it deserved to be called to account for its wrongdoing, God has presented it with a genuine and generous offer of reconciliation.

How has God presented this offer to the world? Paul says that He “hath given to us the ministry of reconciliation” (v18) and “hath committed unto us the word of reconciliation” (v19). Paul was deeply conscious of his role as an “ambassador” (v20). Just as an ambassador would come from his ruler carrying a message from that ruler, Paul was an emissary from God, bringing the message of reconciliation to the world – the gospel – with a direct appeal from Christ Himself: “as though God did beseech you by us: we pray you in Christ’s stead, be ye reconciled to God” (v20). God did all that was needed. All that remained was for sinners to respond, and be reconciled to God.

Paul has long since departed from this world, but his writings are part of the Holy Scriptures, and that same message continues to be declared. Christians are we who have gladly responded, and have received reconciliation. Thereby, though few (if any) of us, realized it at the time, we became part of a much bigger picture as far as reconciliation is concerned.

Paul expounds two glorious aspects of this in his prison epistles.

First, speaking of Jews and Gentiles, he writes, “And that He might reconcile both unto God in one body by the cross, having slain the enmity thereby” (Eph 2:16). He explains how this came about: “For He is our peace, who hath made both one, and hath broken down the middle wall of partition between us; Having abolished in His flesh the enmity … for to make in Himself of twain one new man, so making peace” (vv14-15). By reconciling Jews and Gentiles to Himself, He has brought about their reconciliation to one another, so that believers, whatever their background, are one body in our Lord Jesus Christ.

Second, Paul states that the cross is the means by which God will bring the creation back into a state of harmony with Himself: “And, having made peace through the blood of His cross, by Him to reconcile all things unto Himself; by Him, I say, whether they be things in earth, or things in heaven” (Col 1:20). We, however, have already been reconciled: “And you, that were sometime alienated and enemies in your mind by wicked works, yet now hath He reconciled in the body of His flesh through death” (vv21-22). Our reconciliation is part of God’s glorious plan for all things. We are already in the good of that state of peace that is yet future for the cosmos. 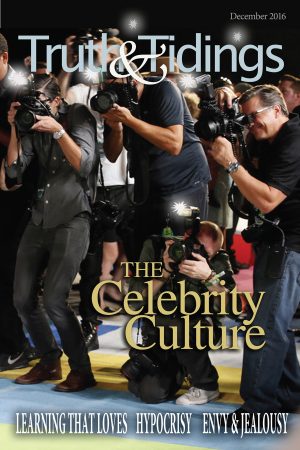