The work in Freetown, PEI commenced in the year 1956. Albert Ramsay, Robert McIlwaine, and Bert Joyce heard that Davis Jewell had recently professed to be saved in the Bedeque area of central PEI. They thought it worthwhile to pay him a visit and, after their meeting, they concluded the Lord was working in the area, especially upon hearing that other souls had recently been saved. They decided to rent a field in North Bedeque, and began a series of gospel meetings in July of that same year. These meetings continued for a period of about 10 weeks, until they received word that the tent must be removed from the property.

As a result of seeing the Lord’s hand in blessing during the meetings, a decision was made to look for a permanent place in which to continue the work during the winter months. The old Lower Freetown schoolhouse was purchased from a farmer and, after a lot of work, was changed from a granary to a hall. Once this work had been completed, with the help of the new converts, the gospel was again proclaimed every Sunday and one week night for the next several months. A large Sunday school work began which resulted in souls being saved and eventually added to the fellowship. On November 3, 1957, 18 Christians sat down for the first time in Freetown to break bread. Others were added to the number through time, and thus began the work of the Lord in this community. Many locals attended and heard the gospel during these early years, but only eternity will prove the true results of those who attended.

For the next number of years, this property met the need, but it eventually became evident that space in the hall was again limited. Albert Ramsay contacted a gentleman in Western Canada who owned land adjacent to the Freetown Hall, and he agreed to sell the property required for the expansion. Major renovations were started in the summer of 1986. This included an addition to the original building that resulted in an increase from the former size of 1000 sq ft. to a much larger building that totaled about 2100 sq ft.

This building proved to be very effective for the next 25+ years but, once again, it became necessary to either expand or find a new location. There was an issue with regard to making the building barrier-free and it was also evident, at this point, that the hall was in need of further repairs. The city of Summerside was the nearest, large community in proximity to Freetown, and also was the area in which an expanded Sunday school work, known as Treasure Seekers, had been carried on for several years.

Hence, after much prayer and consideration, the brethren thought it would be best to construct a new gospel hall in Summerside. It was felt that this area would provide more opportunities to reach out to others with the gospel. In 2013, land was purchased at the corner of Pope Road and Greenwood Drive. In May of the following year construction began on the hall. Upon completion, the new building totals approximately 10,000 sq ft. and has proven to be very conducive to all activities associated with the assembly.

On April 12, 2015 the assembly met in Summerside to break bread for the first time. It is very interesting to note that the new owners of the former Freetown Gospel Hall took possession at the end of the same month. Here again, we see the hand of the Lord at work in answering prayer associated with the disposition of the former property.

The monies for this new building were met abundantly by the generous contributions received from many of the Lord’s people and other assemblies. For this, we are most thankful and continue to give God praise for His many blessings.

Truly, we must acknowledge that the Lord has been good in meeting our needs so graciously. As we look into the future, we trust that God will continue to bless the assembly that it may prosper until the Lord’s return. 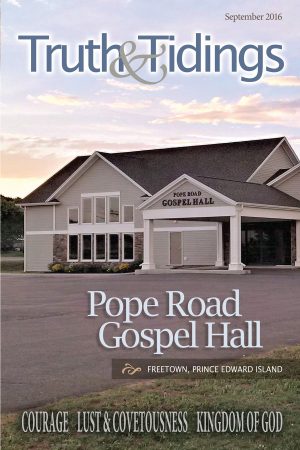