Over the past months, we have seen that the death of the Lord Jesus Christ was voluntary, violent, vicarious, and victorious. It was also …

The Lord Jesus really did die, at the time, at the place, and in the manner that the Scriptures present. Some readers may be thinking, “Is that not obvious? Is there really any need to take a whole article to discuss it?” It is submitted that it is important to give it due consideration, because the fact of the Lord’s death is under attack. For one thing, there is a major world religion whose teaching is that He Himself did not die, that another person was made to look like Him, and was crucified instead. Then there are the sceptics, whose overriding goal is to discredit the Bible. They know that the death and resurrection of Christ are the center of its message, and they correctly reason that, if they can discredit the accounts of what took place over those three days, then they will have destroyed the credibility of the whole book, and hence Christianity in its entirety. Most efforts have centered on the resurrection, and trying to disprove that. Others, at least some of whom can see that the attempts to disprove the resurrection have failed miserably, try a different line of attack, and have sought to argue that He did not die; or, at least, they deny the Biblical account of when, where and how He died.

So, let us remind ourselves of the evidence for the reality of the death of the Lord Jesus Christ.

There is no possibility that the person nailed to the center cross was anyone other than the Son of God. All four gospel writers not only give detailed accounts of the crucifixion, but each explicitly states, “They crucified Him” (Matt 27:35; Mark 15:25; Luke 23:33; John 19:18). At His grave, the angel described Him as “Jesus, which was crucified.” Peter, speaking to the people of Jerusalem, called Him “Jesus, whom ye have crucified” (Acts 2:36; 4:10). Years after, Paul wrote: “We preach Christ crucified” (1Cor 1:23) and also of those who “crucified the Lord of glory” (1Cor 2:8). And in the final book of the Bible, we read of the city “where also our Lord was crucified” (Rev 11:8).

John gives conclusive evidence in chapter 19 of his gospel. When the soldiers approached to break the legs of those crucified, thus hastening death, and avoiding their bodies remaining on the crosses on the Sabbath (v31), they found that “He was dead already” (v33). These men were not easily fooled – execution was their job, and they knew a dead man when they saw one. In addition, if they had allowed a crucified man to live, they would pay with their own lives. It was certainly in their own interest to ensure that He really was dead. And they did indeed make sure of this; one of them “with a spear pierced His side, and forthwith came there out blood and water” (v34), a clear demonstration that death had indeed occurred. Can we depend on this testimony? We surely can. In the following verse (v35), John tells us so: “And he that saw it bare record, and his record is true: and he knoweth that he saith true, that ye might believe.” The one who was writing (John the apostle) was actually there, and observed it all taking place. He was giving an accurate, first-hand, account of these events.

We read further helpful details in Mark chapter 15. When Joseph of Arimathea went to Pilate to ask for the Lord’s body, Pilate was also surprised at how soon He had died: “Pilate marvelled if He were already dead” (v44), and he called the centurion, who verified that He really was dead (vv44-45). As with the soldiers, it was more than this man’s life was worth to make a mistake on this issue, and the fact that Pilate was querying the matter himself, and personally mandating him to confirm the death, would only have served to make him all the more careful.

While we can depend only on the Word of God, and not on the testimony of “secular historians,” it is interesting to note that there are both Jewish and Roman writers, who certainly had no sympathy towards the Lord Jesus, or to the message of the gospel, who make references to His death as an historic event. They do not raise any doubts as to the fact of it.

So, we know, on the solid basis of the infallible testimony of God’s holy Word, that the Lord Jesus Christ did die. Having looked at the Causes of His Death and the Character of His Death, we will go on next month, Lord Willing, to consider the Consequences of His Death. 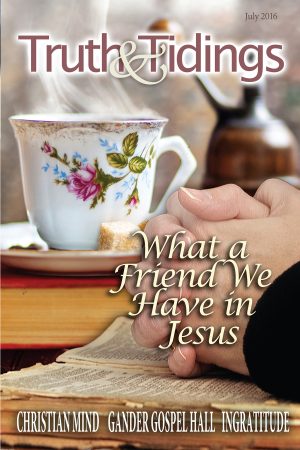