Last month, we saw that through­out His life here on earth, every virtue was present in our Lord Jesus Christ in full perfection. In the Scriptures, believers are exhorted to become more virtuous: to increase in holiness, in patience, in love, in kindness, and in every other noble characteristic. No such development was ever needed in Him. He was perfect in every grace and virtue for the duration of His time here.

Some dispute this, and quote verses that they claim teach otherwise. One such is “Though He were a Son, yet learned He obedience by the things which He suffered” (Heb 5:8). This, they say, shows that He needed to develop in obedience to Joseph and Mary, and to others in positions of authority.

To begin with, Hebrews 5:8 is not talking about His obedience to Joseph and Mary, but to His Father, God. However, we will consider it, as the principles involved are relevant to the case. When we speak of a child “learning obedience,” we may mean that he does not know how to be obedient, and needs to be taught it; or, that he knows how, but has a tendency to be disobedient, which he must learn to curb; or, that he knows how, but needs to learn by experience. All three are involved in the upbringing of children. In the case of the Lord Jesus Christ, the first two were never necessary. Regarding obedience to His Father, or to anyone on earth, He needed no instruction, and there was no hint of disobedience. He “learned obedience” only in the sense of “learning by experience.” In coming to earth, He learned to experience obedience in situations He had not previously faced.

Thus, when we read that He “came to Nazareth, and was subject unto them [Mary and Joseph]” (Luke 2:51), this does not mean that He began to be subject. Luke is just stating that He continued to be what He always was – totally obedient to them, right from infancy.

Luke 2:52 says, “And Jesus increased in wisdom and stature, and in favor with God and man.” This verse is misrepresented in at least two ways. First, some say that it shows that He did not always have perfect wisdom. We disagree with this statement and believe that the explanation is similar to that for His obedience. Wisdom is learned, both by instruction and by experience. He had no need for the former; Luke is referring to the latter. Every day that He was here on earth His experience of life increased, and with it, the wisdom that was an inevitable result. As time went on, His wisdom became more and more evident to more and more people.

Second, they claim that this verse shows He was not always fully in favor with God, that this was something He needed to develop. Once again, we differ strongly with this idea. The Father was never less than 100% pleased with every aspect of His Son’s character and all that He did. Every day, the Lord Jesus did things that brought pleasure to His Father. Thus, at the end of each day, there was even more for the Father to delight in than there had been at its beginning. In that sense, He increased in favor with God. There was no increase in favor as far as quality was concerned, but there was a quantitative increase.

Similarly, with regard to increasing in favor with man, it is not that He became more virtuous, but rather that, day by day, people came to witness even more evidence of His worthy character and behavior, and so their esteem of Him constantly increased.

The verse currently under consideration speaks of Him increasing in “stature.” This word does not always refer to physical height. It sometimes denotes increasing in age. Whatever way we understand it here, it is clear that it is referring to development – He did increase in years, and He did develop physically. We do well to remember this. Adam appeared as an adult from the moment he was created. He looked “grown up,” took instructions, and spoke (Gen 2:16, 20, 23). It was not so for our blessed Lord; this was not God’s way for how His Son would come. He came as a tiny baby, and, for example, He did not start to speak the day He was born (though He was certainly capable of doing so). He did not develop in a way that would strike people as “weird,” either physically or in other ways, such as in the use of language. His stage of development, as viewed by others, was always appropriate to his age. Yet, as time passed, it became evident that He was no ordinary child – a fact highlighted in their reaction to Him of the Jewish teachers in the temple (Luke 2:47). God ordained it that people would only come to realize His greatness in a gradual way, but that greatness was always there. His inherent perfection, and men’s increasing awareness of it, are two different things, not to be confused. The fact that His physical development was similar to ours should not lead us into the error of thinking that He also needed to develop in virtue. No, He was ever totally virtuous.

When we read of Him “being made perfect” (Heb 5:9), it certainly does not mean that He was ever imperfect. The writer to the Hebrews is showing how His experiences here on earth have uniquely fitted Him to function as our Great High Priest. Here “perfect” means “perfectly suited” (for His High Priestly work). It does not in any way imply that at any time He was less than perfect in character.

His perfection will be very much under consideration in our next article, when, Lord willing, we start to look at “His Untainted Impeccability.” 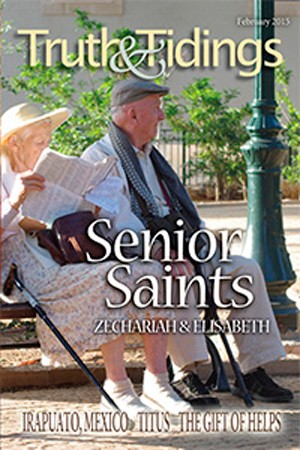