There is still no cure for the common birthday. – Astronaut John Glenn. And thank God for that!

I have now entered a second half-century of life, so I can relate to the desire to avoid the pains and strains of advanced years. Yet, when we look at the divine perspective on aging, we find a completely different picture. Lord willing, this introductory article begins a series on “Senior Saints in Scripture.” May God use them to encourage and challenge senior saints, and at the same time, develop greater admiration and care for them among younger believers.

Sometimes Western societies treat older people almost as relics who have little usefulness and value. However, the Bible calls us to a totally different mindset about older believers. The Old Testament law mandated, “You shall rise up before the grayheaded and honor the aged” (Lev 19:32, NASB). The people were to stand at attention and convey respect and appreciation for the generation that had gone before.

Paul guided Timothy to intreat the old men as fathers, and the older women as mothers (1Tim 5:1-2). Therefore, senior saints in God’s assembly should be the most admired and best-treated older people in the world. We need more of God’s perspective, that “the beauty of old men is the gray head” (Prov 20:29). May God help younger generations to develop an abiding Biblical respect for senior saints.

The beauty of gray hair is not that it makes a man look distinguished and a lady look dignified. Job reminded his three friends of the assumption that, “With the ancient is wisdom; and in length of days understanding” (Job 12:12). Older people, in general, provide wisdom of years, an understanding of life, and discernment based on experiences and observations that a younger generation lacks. Thank God that, in assemblies today, there are senior saints who have decades of knowing God and understanding His Word. It is an absolute travesty if younger generations do not draw on this great resource that God has provided. So, dear senior saints, please pray that God will help us to learn to respect you more. Please be available to pray for us and be available to share your wisdom and knowledge of the things of God.

Believe it or not, old age is a privilege in God’s eyes. But with privileges come responsibilities. The greatest legacy senior believers can leave is their godly example. The Psalmist expressed it best, “Now also when I am old and grayheaded, O God, forsake me not; until I have shewed thy strength unto this generation, and thy power to every one that is to come” (Psa 71:18). He grasped the duty of leading younger saints in the quest to get to know God. What a joy to be like old Samuel who said, “I have walked before you from my childhood unto this day” (1Sam 12:2). He began and ended well, giving a consistent example of communion and conviction based on God’s Word.

It was unforgettable, “the noise [that] was heard afar off,” the strange mixture of mourning and merriment. Senior saints sobbed, while younger ones sang. Israel was laying the temple foundations and reinitiating worship to God. Trumpets blared, cymbals clanged, and voices “sang together by course in praising and giving thanks unto the Lord” (Ezra 3:11). The younger generation was thrilled with the spiritual position of Israel as they enjoyed fellowship and worship like never before. The older generation, though, was downhearted because “many of the priests and Levites and chief of the fathers, who were ancient men … had seen the first house” (3:12). The events of the day brought back sweet memories of the much greater glory of Solomon’s temple. They looked on this as spiritual compromise rather than spiritual success.

Some older saints today look on the current generations and their minds race back to greater days of faithfulness among God’s people. They mourn present compromise compared to days of devotion that they once knew. At the same time, a younger generation may find it difficult to see current practices and convictions as negative, as the present level of devotion may be the best they have ever known.

The enemy often uses differences of perspective and lack of comprehension across generations to divide them. The older might only see the younger as falling short of what they have known, while a younger generation might misinterpret an elder as being “stuck in the past.” The twin tornados of polarization and criticism sweep across assemblies, leaving believers and testimonies divided and damaged. It would have been tragic if that day in Israel had turned to conflict instead of communion and cooperation.

God’s prophet, Haggai, could hear the ancients sending the message that, “Our day was the heyday,” while the younger were saying, “Newer is better.” Haggai appreciated that both generations loved the Lord and longed for God to receive worship. Instead of focusing on differences, they needed a united focus on the “the Word of the Lord” (2:1), the Scriptures. Haggai identified the problem by asking, “Who is left among you that saw this house in her first glory? and how do ye see it now? is it not in your eyes in comparison of it as nothing” (2:3)?

He also encouraged them to “work” together. Even though it was less than in Solomon’s day, God still promised, “I am with you” (1:13). He then pointed both generations to when “the glory of this latter house shall be greater than of the former” (2:9). Neither the past nor the present spirituality was sufficient. Greater glory and spirituality could yet be obtained by focusing together on God’s Word, God’s work, God’s Messiah.

The wise man wrote that, “Children’s children are the crown of old men” (Prov 17:6). This is the Old Testament equivalent of the elderly apostle John saying, “I rejoiced greatly that I found of thy children walking in truth” (2John 4). Surrendering responsibilities that you have faithfully executed for years is never easy. Entrusting them to a future generation can leave a sense of loss. However, one of the greatest joys we have is to see future generations being adequately prepared. As hard as it is, may our senior saints be recompensed with great rejoicing and a sense of “mission accomplished” as the next generations follow their faith and walk in truth. 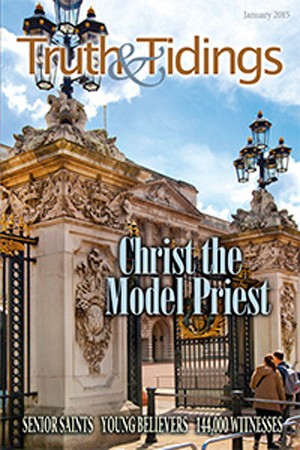