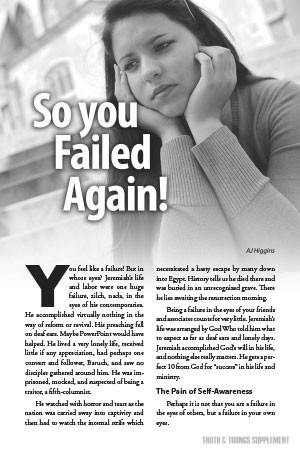 You feel like a failure! But in whose eyes? Jeremiah’s life and labor were one huge failure, zilch, nada, in the eyes of his contemporaries. He accomplished virtually nothing in the way of reform or revival. His preaching fell on deaf ears. Maybe PowerPoint would have helped. He lived a very lonely life, received little if any appreciation, had perhaps one convert and follower, Baruch, and saw no disciples gathered around him. He was imprisoned, mocked, and suspected of being a traitor, a fifth-columnist.

He watched with horror and tears as the nation was carried away into captivity and then had to watch the internal strife which necessitated a hasty escape by many down into Egypt. History tells us he died there and was buried in an unrecognized grave. There he lies awaiting the resurrection morning.

Being a failure in the eyes of your friends and associates counts for very little. Jeremiah’s life was arranged by God Who told him what to expect as far as deaf ears and lonely days. Jeremiah accomplished God’s will in his life, and nothing else really matters. He gets a perfect 10 from God for “success” in his life and ministry.

The Pain of Self-Awareness

You look back over the past and all you can see are times when you did not do what you ought to have done or you did what you should not have done. Resolutions and resolve have not somehow carried you through the trials and challenges. You left the conference with every intention of reading and praying on a regular basis. You had resolved to cease that habit which you knew was not pleasing to God, to throw out some of the books, magazines, and DVDs that are not in keeping with your testimony as a believer. However, in only a short while, you find yourself gravitating back and getting involved all over again.

Does God write us off the way insurance companies write off wrecks? Does He wash His hands of us in disgust and disappointment, vowing to place us on the shelf labeled “damaged goods?”

Failure is real; we cannot minimize or pretend that it did not happen. Failure marks every one of us in our service and testimony. There was only one Perfect Servant, one Faithful Man; all others are faint reflections of His perfection.

The greatest pain comes from the discovery of your own heart. You thought your motives were pure and you had only the honor of God and the good of others before you. Then someone said something, someone reacted in a manner you were not expecting, you were confronted in your own conscience with how self-centered your motives were. As time goes on, you find, like peeling an onion, that there are even deeper levels of deceit and selfishness which infect every motive. You despair if it is possible to have pure motives in your service for God. Sin has, like a deadly virus, invaded every thought and motive.

Allow Jeremiah to come to your aid. He was aware of the hostility of the nation (Jer 16), of the hardness of their heart (16:11, 12; 17:1-4), of the hopelessness of his ministry (1:17-19). What seemed to crush him was the awareness of his own heart (Jer 17:9). It was a microcosm of the nation. “Incurable” and “desperately wicked” are some of the words he uses to describe it. God knew all about your heart when He saved you. It will never be any better; you will only discover greater depths of depravity as time goes on. That does not mean you should give up.

Does God have a future for failures? Is failure final with God? These are crucial questions which demand answers. Thankfully, the Word of God provides those answers in clear and unmistakable language.

The Stain of Failure

Failure may stain a man’s past. Does it have to define a man’s future? Jacob failed big time in his early days. He was a crafty deceiver. He fooled his father and got the blessing. He treated his wife like an expendable commodity; he failed to take leadership in a family crisis (Gen 34); he failed to reveal the character of God to heathen nations (Gen 34:30). However, Jacob ended his days as a prince with God. He went home to heaven with his name honored among the Egyptians and his soul in fellowship with God. He profited from the discipline of God in his life, growing and being refined by the Master Potter.

Abraham knew failure. He went down to Gerar (Gen 20) and lied about Sarah being his wife. Left to himself, he would have placed a serious hindrance in the way of God, accomplishing His Word concerning a son being born to Sarah through Abraham. God in mercy, intervened. When God rebuked Abimelech, He spoke of Abraham as a Prophet (God never speaks in a negative way about His people to the ungodly). The man who was raised up to be a blessing to the nations had now become a hindrance and a problem. From the depths of his shame and futility, Abraham rose to the heights of Genesis 22 and the mountain in Moriah.

Jonah failed to obey God. There was a huge stain over his life. Self-will, bigotry, anger, selfishness, and a host of other fleshly traits marred his testimony. Yet God used him, and the Lord Jesus spoke in positive tones of him in the New Testament, even employing his failure as a picture of His death and resurrection (Matt 12:39-41).

Get your eyes off the stain. If you have owned your failure in the presence of God, repented and forsaken it, He has promised that it has been forgiven. If the failure has been major and public, then trust, and the confidence of your brethren and sisters, will take time to be restored, but the stain of the past does not have to mark you the remainder of your life. John Mark came back from a failure and was a profitable servant for God (2 Tim 4:11).

The Chain of Paralysis

Over-occupation with failure can lead to paralysis. Some are more prone to introspection than others. For some with unrealistic goals and perfectionistic tendencies, the awareness of failure can be devastating. Insecure personalities tend to ruminate over the one negative comment, forgetting the 10 positive ones.

Elijah was rendered inactive because of unreasonable expectations, unhealthy comparisons (“I am not better than my fathers,” 1Kings 19:4), and his “I alone” mentality (v10). Instead of continuing to represent the Lord in idolatrous Israel, he was sitting under a juniper tree away in the south of Beersheba. A sense of his own failure overwhelmed him and led to paralysis in his service for God.

Each of us, as well, can fall prey to this same malady and become wrapped in chains of introspection and self-analysis. Mindless service that is never examined is not to be encouraged. A healthy balance is necessary when evaluating the results of service and motives.

Results must be left with God. Motives must be examined in the light of God’s presence and all that is not consistent, confessed, and owned in His presence. But then He expects us to get back in the race, and not to find a juniper tree for ourselves.

The Gain of Recovery

Picture the scene in your imagination. The Lord Jesus had disclosed to His disciples on at least four occasions that He would rise from the dead after His crucifixion. Yet, they did not believe Him. He appeared to Mary who ran to tell the disciples; again they failed to believe her words. He had appeared to the two on the Emmaus road (Luke 24) who had returned to tell the disciples that He was alive (Mark 16:12, 13); they refused to believe them. Then He personally appeared to the 11 who were still marked by unbelief. We read that the Lord “upbraided them with their unbelief and hardness of heart because they believed not them which had seen Him after He was risen” (Mark 16:14). Yet, in the very next breath He told them, “Go ye into all the world and preach the gospel” (v14). He used failing, unbelieving men to further His work in the world.

Peter would concur with all this. He had failed publicly and pathetically at the fireside in the palace court. Not once, not twice, but three times he had denied his Lord. Restored, re-commissioned, and in fellowship with his Lord, he stepped forth on the day of Pentecost and witnessed for the Lord to the Jews who were in Jerusalem. God did a mighty work and Peter was the vessel, a broken, failing man, yet used by God.

What kind of men and women does He use? Those who have learned through their own failure, that they are broken and failing creatures who must constantly depend on Him for enablement, and who realize that any positive result from their ministry is due to Him and not to self. He employs those who have begun to learn their own hearts as a microcosm of those to whom they minister. He employs failures and makes them fruitful.

The Reign of Grace

To act in conscious disobedience and selfwill, thinking that by His grace, God will right our wrongs and bring good out of it, is to abuse grace. God is a God of matchless and measureless grace. As great as His grace is, we cannot presume upon Him.

For those who have recognized their failure, however, and sought to return to the Lord, there is the wonderful reality that God can work His purposes despite our failure. God is so great in His sovereignty and in His ways, that He is able to take the worst that men can do and use it for His glory.

The failure of an Elimelech in going down to Moab (Ruth 1) resulted in Ruth being brought into the lineage of the Messiah. David’s failure with Bathsheba was costly to him (four sons were lost), but God brought a Solomon out of it. Gomer proved unfaithful to Hosea, yet the Lord used it to teach Hosea something of the grief of God’s own heart over Israel.

Examples can be multiplied and illustrations marshaled to show that grace is able to overcome and redeem the past. The law of sowing and reaping is still valid; not all the results of sin can be undone. But God is able to extract from our failures that which can further His work among others. Calvary stands as an eloquent testimony to the fact that God can use the worst of men and the worst men can do, to further His purposes.

An awareness of the sovereignty of God should never foster careless living in our lives. It should, however, serve as an incentive to give Him our very best, recognizing failure within and failure without, leaving all in His secure and mighty hands. Never allow the clouds of the past to control the present and cancel your future. Give God your best!

God does not want us living with the past; He wants us to learn from the past.