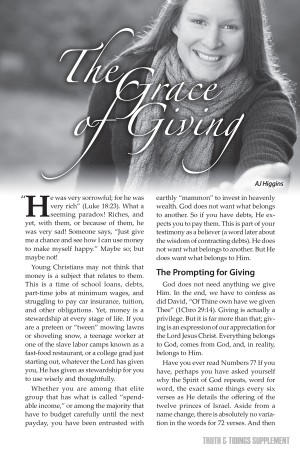 He was very sorrowful; for he was very rich” (Luke 18:23). What a seeming paradox! Riches, and yet, with them, or because of them, he was very sad! Someone says, “Just give me a chance and see how I can use money to make myself happy.” Maybe so; but maybe not!

Young Christians may not think that money is a subject that relates to them. This is a time of school loans, debts, part-time jobs at minimum wages, and struggling to pay car insurance, tuition, and other obligations. Yet, money is a stewardship at every stage of life. If you are a preteen or “tween” mowing lawns or shoveling snow, a teenage worker at one of the slave labor camps known as a fast-food restaurant, or a college grad just starting out, whatever the Lord has given you, He has given as stewardship for you to use wisely and thoughtfully.

The Prompting for Giving

God does not need anything we give Him. In the end, we have to confess as did David, “Of Thine own have we given Thee” (1Chro 29:14). Giving is actually a privilege. But it is far more than that; giving is an expression of our appreciation for the Lord Jesus Christ. Everything belongs to God, comes from God, and, in reality, belongs to Him.

Have you ever read Numbers 7? If you have, perhaps you have asked yourself why the Spirit of God repeats, word for word, the exact same things every six verses as He details the offering of the twelve princes of Israel. Aside from a name change, there is absolutely no variation in the words for 72 verses. And then He summarizes it all at the conclusion.

These men were giving as an expression of what they thought of the altar. In appreciation for the altar, they gave richly, generously, and abundantly. And God took note of it because He appreciated it. He actually devotes one of the longest chapters in the Bible to them and their giving.

What we think of the “altar” or of Christ (Heb 13:10), is shown by our giving of our material possessions to Him. Giving is not limited to a Lord’s Day morning; but we do offer at the Breaking of Bread as an opportunity to give as an expression of our worship.

The Pattern for Giving

The two great chapters on giving are 2 Corinthians 8 and 9. In these chapters, Paul exhorts the believers in Corinth about giving; the giving was not for himself but for poor believers elsewhere. He brackets his exhortation by two reminders: the grace of giving that marked the Lord Jesus Christ, and the generosity in giving that marked God the Father.

Measure and motive, extent and expense, all that is involved in giving is encapsulated in these two Scriptures. We have a pattern, a standard against which we can measure our giving.

What marked the believers of whom Paul wrote in 2 Corinthians 8:5 was that “They first gave their own selves to the Lord.” From that point on, the Lord had everything.

The Priority for Giving

Young believers need to make a priority of giving. This means that you should first determine, after satisfying debts and expenses that are unavoidable, how much you would like to give to the Lord and then set that aside for the Lord. Learning to live on the rest is a useful discipline. To have expendable income to use on that night out with the other young people, for buying more apps or downloading more songs, renting DVDs, or amusement and recreation, and then allow the offering to go by and putting nothing into it, is the opposite of giving as a priority.

There may be rare occasions when you have absolutely nothing to give the Lord of your material possessions, but it should not be a common practice. Christianity was founded on a principle which should mark us throughout our lives. It is the principle of sacrifice. The Lord sacrificed and as a result we have forgiveness and life. We have forgotten what sacrifice really means. You may well argue that affluence and expendable income are words which have no relationship to your financial situation. But if you can spend money for recreation, amusement, and those things we all feel we “deserve,” and then claim you have nothing for the offering on Lord’s Day, you are denying the principle of sacrifice.

To enable you to give, avoid unnecessary debts. The temptation to use credit cards to get things now and to pay later has been the undoing of many. Credit cards are hawked to high school students, placing temptation before young people who have not yet learned financial realities. To create the desire to “have” and to “experience” things is the goal of our consumer economy. God does not want money you owe someone else. Be very careful in contracting debts. Make sure you already have what is necessary to pay that debt. That way it will not hinder your ability to give to the Lord. You will be depriving yourself of one of the great joys of Christian life.

It is vital, that in your early formative years, you develop the habit of giving. If you learn to give what you are able to now, you will find that God will multiply your ability to give as life progresses.

The Proportion to Give

How much should I give? You decide! How much does Christ mean to you? Is your giving on Lord’s Day part of your worship? If God were to judge your appreciation of Christ by how much you have sacrificed to place something in the offering, would He get an accurate impression?

The New Testament does not legislate the amount to give. We are given the single guideline: “as God has prospered” (1Cor 16:2).

The widow who gave her two mites gave more than all the rich men combined. No doubt the monetary value of their gifts far exceeded her small offering, but she gave proportionally more than the sum of their contributions. Her giving must have been one of the incidents which gave the Lord Jesus joy during that last fateful week in Jerusalem when He would know so much sorrow.

Someone has said it is not how much we give but how much we have left after giving. God does not ask us to impoverish ourselves; He does ask us to give according to the measure He has prospered us. The amount to be given is open to your own personal exercise.

The Prudence in Giving

All giving does not have to occur on a Lord’s Day morning. All giving does not have to be through the assembly. There may be missionaries, preachers, or poor believers of whom you are aware and in whom you have an interest. Personal giving is certainly a Scriptural thing and can be a source of great joy. But wisdom is needed. The airwaves, mail, and Internet are full of people begging for money for their cause. Religious leaders appeal for funds and promise blessing to follow. Discretion is needed to know how, and to whom, gifts should be given. If you keep in mind that giving is an expression of fellowship, it will help to direct your giving. While there are many worthwhile causes, many involve practices and teaching with which you can have no fellowship.

In obeying the exhortations to “do good unto all men” (Gal 6:10) and “to be ready to every good work” (Titus 3:1), we should also be generous to people in general and respond to tragedies with generosity. We can wisely give to charities and to meet the needs of humanity in general, but even the ungodly can do this. Only you can give to the Lord.

The Profit in Giving

In 1 Kings 3:4, Solomon gave generously in worship to the Lord. That very same night, God gave generously back to Solomon. This incident highlights the teaching of Luke 16. There we are taught that if we are faithful with what is not ours (our own money), God will give us what is truly ours (spiritual wealth). Giving is a pathway to spiritual treasure. It is also a pathway to eternal dividends. As we give, we also grow spiritually. God is a God Who is marked by generosity. As you learn to give generously, you are developing one of the characteristics of your Father in heaven.

The Practical Aspect of Giving

There is a very practical aspect to giving. While the “cattle on a thousand hills” are His, and the wealth of the world belongs to Him, the question could well be asked: “How does the assembly pay its bills? How does the assembly pay for the activities and outreaches it has?” And “How does God supply His servants?” What of His servant at home and missionary work? How does the assembly send fellowship to them? Who supplies their needs? God supplied Elijah at the brook through ravens who brought him bread and flesh twice a day (1 Kings 17). But in our day, there are very few ravens flying around with flesh (or $100 bills) in their beaks to provide for laborers.

We have become quite accustomed to feeling we “deserve” certain things and cannot do without them. For some it may be that “double-double” at Tim Horton’s every morning. Others may want their “cafe mocha latte” at Starbucks. Perhaps for you it is pizza every Friday night or something similar. We all have things which we have transferred from the “desirable” column to the “must have” column. There is nothing wrong with pizza (how could someone of Italian background possibly impugn pizza!), or the other things mentioned. They are all legitimate; but what about sacrifice? Christianity exists because of sacrifice and its furtherance and prosperity depend upon sacrifice.

The very concept of sacrifice has become relegated to missionaries, preachers, elders, and perhaps those who are a little fanatical and take their Christianity too seriously. Sometimes they are labeled as legalistic. But sacrifice for the sake of the gospel or the work of God has nothing to do with legalism. Those who sacrifice do not parade or trumpet it to others. It does not mean that they wear secondhand clothing or drive horse and buggies instead of cars; they do not live in run-down homes or have oatmeal three times a day. But they have made a conscious choice that what could be legitimately used for self be set aside for the Lord.

What would happen if you “sacrificed” even one indulgence, once a month, and set that money aside for the work of God? After praying, pick out someone you would like to help financially, and when you have a few dollars, send it on. You may think it very small, but as you establish the habit of giving, God will increase your ability to give and also your joy in giving. As well, it will be a great encouragement to the recipient, even if small in light of their total needs.

Remember that giving is the pathway to growth and godliness, and you can never out-give God.