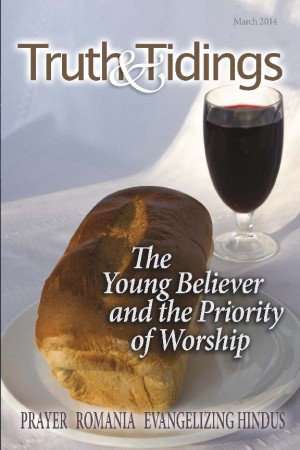 Last month, we saw that the Lord Jesus Christ is the Son of God, uniquely so. This month, our purpose is to show that this relationship is eternal. In other words, with regard to the title of this opening study – “His Underived Eternal Sonship” – the emphasis last month was on “Sonship.” This month it is “eternal” that is stressed.

That He is referred to often as the Son of God when here on earth is undisputed. In association with major events, including His birth (Luke 1:35), His baptism (Luke 3:22), His transfiguration (Luke 9:35), and His resurrection (Rom 1:4), He is explicitly stated to be the Son of God.

But did He become the Son at His birth? Many Scriptures show that the answer to this question is “No.” He was already the Son when He came into the world. In Isaiah 9:6 we read: “For unto us a child is born, unto us a Son is given.” This is explained more fully in Galatians chapter 4:4: “But when the fulness of the time was come, God sent forth His Son.” For the Son to have been “given” and “sent forth,” He had to be the Son already. The Lord Himself says: “I came forth from the Father, and am come into the world” (John 16:28). To have come forth from the Father He must already have been with the Father, and already the Son.

Going further back to the time of the creation, Scripture provides conclusive proof that He was already there. In John 1:1 we read: “In the beginning … the Word was with God.” The word “was” is in the imperfect tense, indicating a state already in existence at that time. In the beautiful prayer in John 17, hours before going to the cross, the Lord Jesus Christ spoke of “the glory which I had with Thee before the world was” (v5) and also says, “Thou lovedst Me before the foundation of the world” (v24).

Even before we start to examine specific Scriptures, this fact is apparent from what we have already seen. The creation is the first event in history: “In the beginning God created the heaven and the earth” (Gen 1:1). He was already there, and, as we shall see, He was active in the act of creating (Col 1:16). Since He was there at the beginning, He could never have had a beginning; He is eternal.

Prophecies regarding His coming also point to His eternal Sonship. Reference has already been made to Isaiah 9 verse 6, which shows Him to be the Son Who would be given. Later in that verse He is called the “Everlasting Father,” or “Father of Eternity” (JND). The full meaning of this is beyond our comprehension, but one thing is certain: it could only be said of One Who is Himself eternal.

In another prophecy, telling that He would be born in Bethlehem, we read that His “goings forth have been from of old, from everlasting” (Micah 5:2). The phrase “from everlasting” is translated by Darby as “from the days of eternity.” Again, this is beyond our finite minds, but it shows that He, the Son, is eternal, just as the Father is.

Turning to the New Testament, the very grammar used is indicative of His eternal Sonship. Take, for example, John 1:18: “the only begotten Son, which is in the bosom of the Father.” The term translated “which is in” is a present participle. The phrase could be translated “being in the bosom of the Father” indicating not only the uniqueness of the relationship, but also its timelessness: it is ever and eternally true.

The words of the Lord in John chapter 8:58 could not be clearer: “Verily, verily, I say unto you, Before Abraham was, I am.” Note that it proves conclusively that our Lord Jesus Christ is the eternal Son. Repeatedly in this chapter He has been speaking of God as “My Father.” Now this climactic statement of the chapter shows that this is eternally so. If there was a time when He came into being, He would have said, “Before Abraham was, I was.” The verbs translated “was” and “am” are not the same, and they show that the meaning of the statement is “Before Abraham came to be, I exist.” His use of “I am,” which would make the statement ungrammatical under normal usage, shows that He never came into being. Moreover, His use of “I am” immediately reminds us that this is what God called Himself when speaking to Moses at the burning bush (Exo 3:14). It is highly expressive of His eternity and His deity.

In a later article, we shall see clear evidence for the deity of the Lord Jesus – that He is God. Eternity is an essential attribute of deity, and so proving His deity also proves His eternity.

But what about the verses that some use to try to counter the doctrine of Christ’s eternal Sonship? We will consider them in next month’s article, Lord willing.