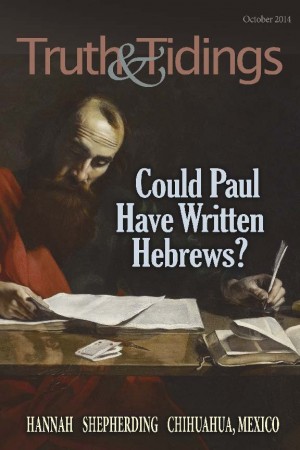 Last month, we saw that our Lord’s deity was not diminished by His coming into the world. However, some attempt to deny this truth. The purpose of this article is to consider Scriptures that they use (or, rather, abuse).

The “rich young ruler” addressed the Lord as “Good Master,” or “Good Teacher” and asked Him, “What good thing shall I do, that I may have eternal life?” The Lord replied, “Why callest thou Me good? There is none good but one, that is, God” (Matt 19:16, 17). Some claim that here the Lord Jesus is saying that He is not God, however, the opposite is the case.

The man was mistaken on two counts. First, he thought that he could get eternal life by his own works. Second, he only recognized Jesus as a good teacher, not as God. The Lord’s response points out the inconsistency of what the man was saying. If He is not God, the man cannot rightly call Him “good.” If He is “good,” He must be God. Thus, He is not denying that He is “good” or that He is God. He is showing the man that He is “good” because He is God. Contrary to it being a denial of His deity, it is an affirmation of it.

Another Scripture often quoted by those denying Christ’s deity is His statement, “My Father is greater than I” (John 14:28). However, in last month’s article, the first statement we considered was His enemies’ acknowledgment that He was “making Himself equal with God” (John 5:18). Are these two verses from John’s gospel contradicting each other? No! The key, as always, is the context (14:28). The disciples were sad because He was about to leave them. But if their love for Him was as it should have been, they would have been glad for His sake. Why? His Father was in glory, being worshiped in heaven. In contrast, He, the Lord Jesus, was in humiliation, in a world where He was not acknowledged. In that sense, at that time, the Father was “greater” than He, not greater in essence (both were equally God), but greater in that He (the Father) was in a sphere where His glory was seen and recognized. That difference would soon be no more. The Lord Jesus would be glorified “with the glory which I had with Thee before the world was” (17:5). The disciples should have been glad about that.

We now turn to John 5:19, where the Lord Jesus said, “The Son can do nothing of Himself, but what He seeth the Father do.” Some think this indicates that He had no power. But look at the setting. The Jews, angry at Him for healing on the Sabbath, accused Him of working against what God had ordained (v16). In response, He pointed out that, contrary to working against God, He was working in total harmony with Him (v17). Then, in the subsequent verses, He showed just how close this “working relationship” was; so harmonious that it was impossible for Him to do anything outside of the Father’s will. Thus, when He said, “The Son can do nothing of Himself,” it was not a matter of what was physically impossible (as if He had no strength to do anything by Himself), but of what was morally impossible (that He would ever act independently of His Father, or in opposition to Him). Only One Who is God could truthfully say this. So, as before, a verse used by those who try to deny His deity is seen to be a clear statement of it.

Consider Mark 13:32: “But of that day and that hour knoweth no man … neither the Son, but the Father.” This, some claim, shows that, on earth, He was not omniscient. Jamieson, Fausset, and Brown, in their commentary, summarize two alternative interpretations of these words. “Whether it means that the Son was not at that time in possession of the knowledge referred to, or simply that it was not among the things which He had received to communicate — has been a matter of much controversy.”

Our Lord’s omniscience when on earth is explicitly stated and frequently alluded to: “Now are we sure that Thou knowest all things” (John 16:30); “Lord, Thou knowest all things” (John 21:17). For example, He knew people’s thoughts (Luke 6:8). In light of this, the second view stated above (that it was not among the things that He had received to communicate) is, in the view of this writer, the correct understanding. It fits with the context in which the words were spoken, that the day and hour of His return is entirely the prerogative of His Father). It is also in harmony with Acts 1:7 when, also speaking of the time of His return, He spoke of “the times or the seasons, which the Father hath put in His own power.” The precise time of His return in glory was exclusively the Father’s responsibility, and He (the Lord Jesus) happily left it with Him (the Father). It was not that He was ignorant of the date, but that, being outside His sphere of responsibility, He did not choose to have anything to do with it.

There are other Scripture references in which “not knowing” is also used in a sense that cannot mean “ignorant of.” For example, Luke 13:27, Acts 7:18, and 1 Corinthians 2:2. In each of these cases, the word “know” is the same as in Mark 13:32. They show that someone can “not know” something in a sense other than being in ignorance of it.

In a different context, we read, “Their sins and iniquities will I remember no more” (Heb 8:12; 10:17, quoting Jehovah’s words in Jer 31:34). This does not mean that He is ignorant of our sins, or lacks the ability to recall them, and no one suggests that this negates God’s omniscience. The Lord Jesus’ words in Mark 13:32 do not negate His omniscience either.

What about the phrase “made Himself of no reputation,” sometimes translated “emptied Himself” (Phil 2:7)? This we shall consider, but not until we reach the next subject, “His Uncompromising Humanity.” And that must wait until next month, in His will.