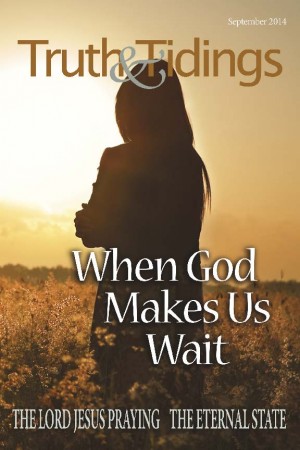 In last month’s article, we considered Scriptures that show the deity of our Lord Jesus Christ. These Scriptures do not refer specifically to when He was in this world. So the question must be addressed: Did He retain His deity when He came to earth?

The answer to that question is an emphatic “Yes.” Our purpose in this article is to look together at some references that show this to be so.

The way in which the Lord Jesus Christ, while on earth, spoke of God as His Father constituted a claim to deity. John chapter 5 verse 18 shows this: “Therefore the Jews sought the more to kill Him, because He not only had broken the Sabbath, but said also that God was His Father, making Himself equal with God.”

In John chapter 10 verse 30, the Lord Jesus states, “I and My Father are one.” This does not merely mean that they were united in their purpose; it indicates that they are one in essence – both are equally possessors of deity. The response of His listeners (v31) confirms this: “Then the Jews took up stones again to stone Him.” Had He been claiming only that He and God were one in aim and purpose, there would not have been such a vehement reaction. Anyone purporting to be a teacher among the Jews would have claimed that his goal was that the will of God be done. No, this statement was a direct assertion of His deity, and His hearers well knew it, hence their desire to give Him what a blasphemer could expect – being stoned to death. Indeed, they explicitly say this, in verse 33: “For a good work we stone Thee not; but for blasphemy; and because that Thou, being a man, makest Thyself God.”

These Scriptures show that His enemies had no difficulty in understanding exactly what His words regarding His relationship to the Father meant. How tragic it is that some who claim to be His friends seem to have such a problem in accepting His unequivocal assertions.

How wonderful are the ways of God. The bitter enemies of our Lord, in their reactions to His words, unwittingly provided strong testimony to the reality of His claims. Centuries later, we read their words and actions, and, in the wisdom of God, their opposition is the very thing that shows the reality of His deity in full relief.

Their reaction to the healing of the man sick of the palsy (Mark 2:1-12) gives us another example of this. The Lord tells the man, “Thy sins be forgiven thee” (v5). The scribes respond: “Why doth this man thus speak blasphemies? Who can forgive sins but God only?” (v7). Their second point was correct: only God can forgive sins, and the Lord Jesus did not dispute this fact. Where they were wrong was in their first point: failing to recognize that the One Who had forgiven this man’s sins is indeed God. And, by healing the man, He proved that He had the authority to forgive sins (v10), in other words, that He is God. Thus, once again, the opposition of His enemies is marvellously used by God to show the very opposite of what they were trying to prove.

After His resurrection, when Thomas saw Him, he exclaimed, “My Lord and my God” (John 20:28). Without doubt, Thomas believed that this Man, with Whom he stood face-to-face, was God. Had Thomas been mistaken, the Lord would not have hesitated to correct him. On the contrary, He fully accepted the ascription of deity. Equally, He accepted worship, not only after His death and resurrection (Matt 28:9, 17), but also before (Matt 8:2; 14:33; 15:25; 20:20). This all stands in sharp contrast to the angel before whom John fell down to worship in Revelation 22. The aged apostle is told, “See thou do it not for I am thy fellowservant … worship God.” The Lord Jesus never said any such thing to any of His worshipers, for, in worshiping Him, they were worshiping One Who is God.

The epistles also bear witness to this truth: “And without controversy great is the mystery of godliness: God was manifest in the flesh” (1Tim 3:16). Truly the One Who came is God manifest in flesh; He did not cease to be God when He came. Paul also writes: “For in Him dwelleth all the fulness of the Godhead bodily” (Col 2:9). The word “Godhead” here does not just denote the attributes of God; it signifies much more – the very essence of deity. Let this come to us in its full force: these two words, “Godhead” and “bodily,” are together, side by side, in one verse. Why? Because they are both true of our Lord Jesus Christ, One, Who uniquely has a body in which the fullness of deity permanently dwells.

Well could He say, “That all men should honour the Son, even as they honour the Father. He that honoureth not the Son honoureth not the Father which hath sent Him” (John 5:23). There is no such thing as giving the Father His due and not giving the Son His due. Anyone who denies the deity of the Son is no friend of God’s. John makes the same point in his first epistle (2:23). “Whosoever denieth the Son, the same hath not the Father.” The Scriptures are clear: anyone who denies the deity of our Lord Jesus Christ is not saved.

It would be a happy thing if we could rest the case there and move on to our next subject. However, Satan hates the truth of Christ’s deity, and he has used his agents to cast doubt upon it, by the misconstruing of certain statements of Scripture. These we must honestly consider. We will do so next month, Lord willing.