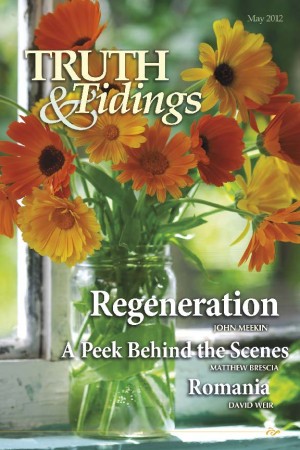 It is a delight to continue the regular work of consecutive Bible teaching in the assembly. The saints continue to be active in gospel outreach work in one of the local hospitals and in a home for the elderly.

In October we received to the fellowship of the assembly, Robert and Sally Beckett, a couple from Pamber Heath assembly, England. They have been visiting the Republic of Moldova for some time now and are exercised to serve the Lord there among a small number of assemblies with which they have contact. They have come to live in Brasov for the daunting task of learning the Romanian language. I am doing lessons with them twice a week to help them with this. Robert’s ministry (through interpretation) is proving to be a blessing to the assembly.

Over the past two and a half years, the assembly has continued an outreach work in the village of Cuciulata, which is about 60km from Brasov. The part of the village we visit is inhabited by gypsies who live in poor conditions. The Lord has been pleased to bless in salvation over this period and, following baptisms at different times, there is now a small assembly of eight believers who gather on a regular basis. There are also a few others who profess salvation, including a woman who trusted Christ as her Savior at the end of December. Her husband has also been attending the meetings and we are praying that he too will be saved.

Several brothers from Brasov take turns to go there to help this new assembly in the teaching of God’s Word. This is done in such a way that a visit is made every week. The regular teaching that is given is necessary not only for the spiritual growth of the saints, but also to preserve them from the influences of wrong teaching from a denominational group in the village. We give God the glory for all He has done. We pray and continue to labor that the Lord may strengthen and further bless His work in this needy locality.

This work commenced in 2004 out of a deep burden for the young people we knew from Ploiesti, Plopeni, and Brasov, most of whom were raised in Christian homes and brought regularly to the assembly gatherings. At that time, only a few were saved and none were baptized. Every second Saturday, a meeting is held for them at Ploiesti; these meetings deal with many Scriptural matters relevant to their age. Between 20 and 30 young people are present at each meeting. As well as the teaching from the Word of God given to them, an integral part of the work has been time spent in personal discussions with those who desire this. As well as getting to know many of them in this way, it has also afforded opportunities for giving counsel on matters they face and encouraging them to live for the Lord.

In addition, a camp has been held every summer since 2005. These have proven to be blessed and fruitful times in which the Lord has been pleased to touch the hearts and work in the lives of many young people. The camp work is also for adults in assembly fellowship, with many benefitting by a week of teaching given by my fellow laborer Daniel Enea.

There are some 22 young people who have been received to the fellowship of the assembly in their respective localities over the period of this work. There are some others who have professed faith in Christ but are not yet baptized. Others still are not yet saved. It has been a joy to see the Lord working at different times and in various ways in many young lives. The biggest challenge for them is living for the Lord in the midst of the many temptations they face in these difficult days. We long to see greater spiritual growth and development in them, that they will increase in the knowledge of Christ and that the will of God will be fulfilled in their lives.

This dear Romanian brother is a beloved fellow servant; we have labored together for many years in the various aspects of the work the Lord has committed to us, including an eight year period when we regularly visited the Republic of Moldova. We also work closely together for the annual camp work mentioned earlier in this article.

Besides his main responsibility in regularly teaching and preaching in his home assembly in Ploiesti, he also goes to the nearby town of Plopeni, on a weekly basis, to help the assembly there, through the Word of God. He also regularly visits a village where there is a family of believers, to encourage and help them. Here in Brasov, we enjoy the ministry he brings to us once a month.

For some six years now, Daniel has also been regularly visiting an orphanage not far from Ploiesti, which is run by a couple who are believers. Every Monday evening he goes faithfully to bring them a message from God’s Word. The Lord has been pleased to bless this work also, with a number who have professed faith in Christ and some who have been baptized.

This is the title of a magazine which is distributed free of charge to any who request it. It appears bimonthly and consists mainly of articles translated from assembly magazines in the English-speaking world. The magazine is sent out widely in Romania and parts of the Republic of Moldova, with more than 3,000 copies distributed each issue.

“Finally, brethren, pray for us, that the Word of the Lord may have free course, and be glorified” (2Thes 3:1).