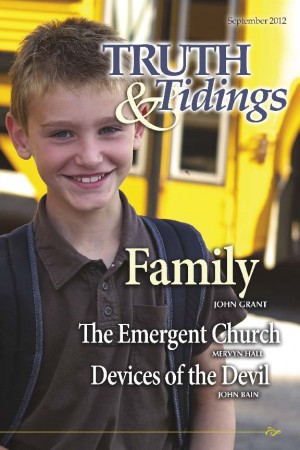 In current English usage the term “redemption” is associated with a transaction involving the release of a person or an item in exchange for some type or form of payment. This is also how the subject is presented in the Scriptures, with added dimensions which help us to grasp the concept of this important doctrine.

The subject of redemption occupies a major place in both the Old and New Testaments. In the Old Testament, we learn about the redemption of people, property, animals, slaves, and also the nation of Israel. In the OT two main word groups are used to convey the idea of redemption. The first word is padah (Strong’sH6299; It has been suggested that this word is primarily used with regard to persons or the redemption of living things). The other Hebrew word is ga’al (Strong’s H1350). This word is translated in the OT as “revenger” (Num 35:19), “avenger” (Deut 19:6), and “kinsman” (Ruth 3:9). This is the word which Job used when he exclaimed, “I know that my redeemer liveth and that He shall stand at the latter day upon the earth” (Job 19:25). This particular word occurs over 100 times in the OT. Unger gives its meaning as “to redeem, deliver, avenge, act as a kinsman.”

Possibly the best known illustration of redemption occurs in the book of Ruth. In the fourth chapter of this book two separate OT laws converge. The law of the levirate marriage (Deut 25:5-10), and the law of the redemption of the land (Lev 25:14-17). Therefore, we are presented with teaching relating to redemption of both property and people. In Boaz we have a beautiful picture of our Lord Jesus Christ. Three things were required of a redeemer. He must be one who has the right of redemption, he must be willing and able to redeem, and he must also be free from the calamity which occasioned the need for redemption. Having taken a body, as a perfect man, Christ has the right of redemption as our “near kinsman.” He was both willing and able to redeem and because he is inherently sinless and holy He has the power to redeem those who are sold under sin (Rom 7:14).

Redemption and its power

In the New Testament there are again two main word families which convey to us the teaching of redemption. The word lutron(Strong’s G3083) and its cognates, means to “redeem to liberate or to ransom.” The other word family is agorazo(Strong’s G59). This word is derived from the word “market” and thus carries the connotation “to buy,” meaning to buy at the market or to redeem. The verb exagorazo (Strong’s G1805) is a stronger form of this word and means “to buy out of,” with the background picture being the slave market. The slave having been purchased will be set free, never to be placed into the market to be sold again. It is interesting to note that this word is used four times in the New Testament, and is the word used in Galatians 3:13 and 4:5. These passages indicate redemption from the curse and bondage of the law. Such is the power of redemption that we will never come under this curse nor are we liable to come under bondage to the law.

Redemption and its price

Peter indicates the price paid to redeem, “Forasmuch as ye know that ye were not redeemed with corruptible things, as silver and gold, from your vain conversation received by tradition from your fathers; But with the precious blood of Christ, as of a lamb without blemish and without spot” (1Peter 1:18-19). Paul adopts similar language as he writes “In Whom we have redemption through His blood, the forgiveness of sins, according to the riches of His grace” (Eph 1:7). As believers, we rejoice as we consider the many passages which indicate the price which was paid for our redemption: it was the blood of Jesus Christ (1John 1:7), the blood of the everlasting covenant (Heb 13:20), His own blood (Rev 1:5), the blood of His cross (Col 1:20), and as already intimated, it was “precious blood.”

Redemption and its purpose

Paul commences a section of 1 Corinthians with the words “All things are lawful unto me but all things are not expedient”(1Cor 6:12). He closes the section with the same words (1Cor 10:23). There are certain habits and practices of the world that can very easily become a habitual part of our lives and while we feel that these may be “lawful” we need to ask if they are “expedient?” Are they profitable? Paul gives the key in 1 Corinthians 6:20 and again in 7:23 that will guide us as we seek to establish what may or may not be profitable. In these two passages he writes “ye are bought with a price.” As believers, we need to remember that everything we are and have, belongs to the Lord Who has redeemed us. In light of this, we do well to remember Paul’s injunction “therefore glorify God in your body and in your spirit, which are God’s”(1Cor 6:20).

Redemption and its pledge

As those who have been redeemed, we have received the holy Spirit which is the deposit or guarantee of future glory. Paul writes “In Whom ye also trusted, after that ye heard the word of truth, the gospel of your salvation: in Whom also after that ye believed, ye were sealed with that holy Spirit of promise, which is the earnest of our inheritance until the redemption of the purchased possession, unto the praise of His glory (Eph 1:13-14). The fact that we have received this pledge anticipates a future day of redemption for every believer (Eph 4:30).

Most who are reading this article will know that the beautiful expression “my Redeemer” does not occur in the New Testament. We are indebted to two men in the Old Testament for the use of this term: Job who we have already mentioned (Job 19:25), and David (Psa 19:14). We delight to join with them and sing

My Redeemer! O what beauties
In that lovely Name appear;
None but Jesus in His glories
Shall the honored title wear.
My Redeemer!
Thou hast my salvation wrought.