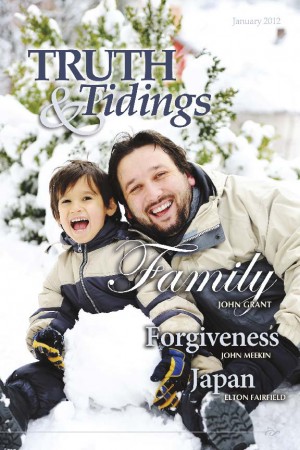 Of all of the doctrines of salvation resulting from the death of the Lord Jesus, perhaps the one that brings greatest delight is that of forgiveness. David acknowledged this when he wrote “Blessed is he whose transgression is forgiven, whose sin is covered” (Psa 32:1).

The word “blessed” in this context could literally be rendered as happiness, or the relief experienced when one knows that their sins are forgiven. Paul quotes this passage in Romans 4:7, as he describes the blessing of God which is extended to all and is appropriated on the basis of faith. In the Old Testament the idea of forgiveness is conveyed principally by words from three Hebrew roots, Strong’s #H3722, H5375, H5545. In the New Testament two main Greek verbs: Strong’s #G863 and G5483 along with the noun form, #G859, are used to relate to us the doctrine of forgiveness. In the Old Testament the word “pardon” is used, although this is never used in the New Testament. In the New Testament the word “remission” is used, indicating release from the sentence of sin. The word forgiveness is used in both testaments.

The act of God’s forgiveness means to release, to put away, or to let go. It is the taking away of sin and its condemnation, from the offender or offenders, by imputing the punishment and the righteous judgment of God upon a divinely provided substitute. As Chafer comments, “Divine forgiveness is never extended to the offender as an act of leniency, nor is the penalty waived, since God, being infinitely holy and upholding His government which is founded on undeviating righteousness, cannot make light of sin. Divine forgiveness is therefore extended only when the last demand or penalty against the offender has been satisfied.”1 The principle of Hebrews 9:22 applies, “and without shedding of blood is no remission.”

Forgiveness is extended by God to sinners (Luke 7:48), to sinning Christians (1John 1:9), and to the nation of Israel (Num 14:11-20). God also expects those who have been forgiven to have a forgiving spirit toward those who have transgressed against them (Matt 18:21).

The God of Forgiveness

The question was asked by the scribes in the home in Capernaum (Mark 2:7), “Why doth this Man thus speak blasphemies? Who can forgive sins but God only?” As has often been pointed out they did not realize Who was standing in their midst. Through the healing of the paralyzed man, Christ proved Who He was and demonstrated to them that He possessed all the power of incarnate deity (Mark 2:10). It is the unique prerogative of God to forgive sins. The Scriptures constantly witness to a God Who delights in forgiveness (Ex 34:6-7, Psa 103:12). One of the most touching is in Nehemiah where a literal rendering of the Hebrew is “and Thou art a God of pardons” (Neh 9:17 YLT). Forgiveness is only possible because God is a God of grace and of pardon.

The Ground of Forgiveness

Forgiveness is not often linked directly in Scripture with the cross, although there are a number of occasions where this occurs. We read “In Whom we have redemption through His blood, the forgiveness of sins, according to the riches of His grace” (Eph 1:7). In the upper room, as the Lord instituted the remembrance supper, He said “For this is My blood of the new testament, which is shed for many for the remission of sins” (Matt 26:28). Forgiveness or remission is more often linked in the New Testament with Christ Himself. “Him hath God exalted … to give repentance to Israel and forgiveness of sins” (Acts 5:31). “Through this man is preached unto you the forgiveness of sins” (Acts 13:38). These, along with passages such as Ephesians 4:32, link forgiveness with an exalted Savior, our Lord Jesus Christ. The work of Christ can never be separated from His person; forgiveness comes through all that He is and all that He has accomplished at the cross.

The Gift of Forgiveness

Forgiveness of sins, while based on the perfect satisfaction that the death of Christ has brought to God, is only available on the ground of repentance from sin and acceptance of Christ by faith. John the Baptist, Christ Himself, Peter, and Paul all preached the necessity of repentance. Paul indicates that he preached both to Jews and Gentiles, “repentance toward God and faith toward our Lord Jesus Christ” (Acts 20:21). Repentance and faith are not merits by which we obtain forgiveness but are the means by which we receive the gift of God (Eph 2:8-9). This forgiveness is preached in Christ’s name (Acts 13:38), procured by His blood (Eph 1:7) and is obtained by faith (Acts 10:43).

The Greatness of Forgiveness

While the New Testament indicates things that accompany salvation, it is outside of the scope of this article to try to identify them comprehensively. However, such is the extent of forgiveness that it deals with all sin – past, present, and future. Paul reminds us that God has forgiven us all trespasses (Col 2:13 RV). Mr. Tom Bentley used to preach that God had put our sins out of sight (Isa 38:17), out of reach (Micah 7:19), out of mind (Jer 31:34), and out of existence (Col 2:13-14). What a God we have!

The Gospel of Forgiveness

It is interesting to note that Luke opens and closes his Gospel with references to forgiveness. “To give knowledge of salvation unto His people, by the remission of their sins” (Luke 1:77). He records the words of Christ as He commissioned His disciples, “and that repentance and the remission of sins should be preached in His Name among all nations, beginning at Jerusalem” (Luke 24:47). No article on the forgiveness of sins would be complete without reminding our hearts that this is still our responsibility. We have a message to take to our friends and neighbors that guarantees the forgiveness of every sin, if they repent and trust the Savior. This should motivate us to reach as many as possible with this glorious message.

This subject should make us rejoice; as those whose sins have been forgiven, our response is to love much (Luke 7:47). The proof of this should be seen in our lives. To quote Paul again “and be ye kind one to another, tender hearted, forgiving one another, even as God for Christ’s sake hath forgiven you” (Eph 4:32).