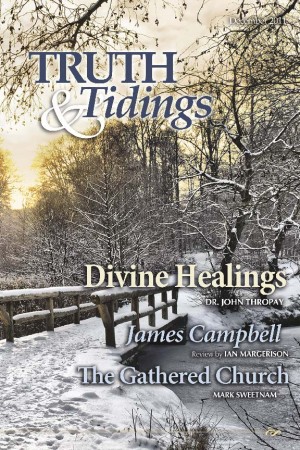 With the descent of the Holy Spirit on the day of Pentecost, the Church, the body of Christ came into being. This great construction, spanning centuries of time and geographical expanses and including every believer in the Lord Jesus Christ, will continue to be built until the return of Christ when the Rapture signals its perfect completeness.

Shortly after the day of Pentecost another entity came into being. This was the church of God at Jerusalem, the very first local assembly. As the first such gathering, it provides a vital prototype for all that follow. Those “that gladly received” the message of the gospel “were baptized” and “added” to the assembly fellowship (Acts 2:41). This company, then, “continued steadfastly in the apostles’ doctrine, in the breaking of bread, and in prayers.” As distinct from the global coverage of the Church the body of Christ, this church was local, confined to Jerusalem. And, as the gospel spread throughout the Roman Empire its progress was marked by local assemblies – the churches of God. So, Paul could write to the Corinthians about the necessity to avoid giving offense “to the Jews, nor to the Gentiles, nor to the church of God” (1Cor 10:32). This instruction presupposed a body of individuals marked by their separation and distinctiveness, from existing religious and social groupings.

In the early centuries of church testimony this distinctiveness was clearly maintained. In an atmosphere of persecution, where identification with Christ could mean intense suffering, loss, and even death, no one would take lightly the decision to join with the believers. The pattern of conversion, baptism, and joining the local church was the actual, as well as the Scriptural, norm.

In the year 312, this began to change. That year marked the adoption of Christianity by the Roman emperor Constantine. The genuineness, or otherwise, of Constantine’s conversion remains unclear, but its impact on Christendom was undeniably dramatic. Christianity went from being a radical and peripheral religion to becoming the official religion of the Empire. Once it was a sure route to persecution and ostracism; then Christianity became the pathway to preferment and social advancement. Thus began the identification of church and state that has continued to the present day, to the consistent detriment of Scriptural Christianity.

The sphere of Christendom that developed in the centuries after Constantine was very different to the New Testament experience. The acceptance of Christianity by a ruler – whether as the result of conviction or as the fruit of political expediency or dynastic imperatives – was regarded as signaling the wholesale conversion of his people. Baptism, by means of a mistaken analogy with circumcision, lost its Scriptural significance. From being a public act of identification with Christ, entered into by a true believer, it became a meaningless ritual carried out on infants who had no capacity either to believe or to reject the gospel.

While there were always those who practiced the Scriptural pattern of church testimony, this indiscriminate, national counterfeit became usual. Even the Reformation failed to address this issue adequately. Luther hoped that the German reformation would result in the end of an episcopal hierarchy, and a more obvious working out of the truth of the priesthood of all believers. As a temporary measure he approved the transfer of their property and power to Protestant nobles. These nobles were disinclined to relinquish that status, especially in light of the radical and violent events of the peasant’s revolt. Subsequently, the Peace of Augsburg, which brought the Thirty Years’ War to an end, enshrined the principle cuius regio, eius religio (whose realm, his religion). This meant that the rulers of individual states determined the religion of their state and of their citizens. In England, too, the conversion of the national church to Protestantism was a purely political decision by Henry VIII. While his son Edward VI pursued further reformation as a result of his genuine evangelical convictions, membership of the national church remained compulsory for each individual, regardless of their actual views. While the Scottish church differed in that it followed a Presbyterian model, it was still a national church, encompassing everyone – saved or unsaved.

However, the period of the Reformation was also marked by the emergence of “gathered churches.” These groups were made up of those who rejected the joining together of church and state. Such groups had always existed and many, including the Swiss Waldensians and the Czechoslovakian Hussites, gladly identified with the Reformers’ teachings on justification by faith alone. Many of these believers insisted that baptism was proper for adults who had been saved and was an essential preliminary for gathering in church capacity. For this reason, they were often identified as Anabaptists, meaning “rebaptizers.” In addition, most Anabaptists maintained the truth of the priesthood of all believers, practiced under the control of the Holy Spirit. For this reason, they rejected an ordained ministry and insisted that believers should have freedom to exercise their spiritual gifts. They were also, for the most part, strongly Biblicist, relying on Scripture and not church teaching to guide their lives.

Some Anabaptists held radical and extreme political views, and the influence of these groups led to some horrific events. Anabaptist prophets were, most notably involved in a notorious siege and massacre at Münster, Germany in 1534. These events hardened public opinion against the Anabaptists, even though many of them were not politically radical. For this reason, “Anabaptist” was used as a term of reproach, and Anabaptists became the objects of fierce persecution by both Catholics and Protestants throughout Europe. As a result, many fled to the New World and settled in the colonies of North America.

The Anabaptist movement was concentrated largely in Europe. While some Anabaptists were to be found in England, they were not plentiful. However, similar ideas about the gospel, the church, and baptism were emerging among those who became known as Puritans. These believers were dissatisfied with the state of the English church, believing that the Reformation had not gone far enough. As it became increasingly clear that their demands for further reformation would fall upon deaf ears, many Puritans became Dissenters – separated from the Church of England. These Dissenters fragmented into a wide variety of groups. Some held very strange doctrines and advocated radical political positions. Most, however, sought the freedom to practice what they understood as the truth of Scripture. Some gathered as congregationalists, some as Presbyterians, and others as Baptists. Each of these groups shared a recognition that only true believers had a place in the visible church, and all sought to separate themselves from the union of church and state that prevailed in contemporary Christendom.

This was never an easy step to take. Under the reigns of Elizabeth, James, and Charles I, many were persecuted, imprisoned, tortured, and martyred for their obedience to the Word of God. After a brief period of prosperity under the rule of Oliver Cromwell, the Restoration brought a fresh wave of oppression. Some escaped to North America, where, in the effective absence of any national church, they found greater freedom to practice their beliefs. They endured faithfully through dark and difficult days, and in the sovereign purposes of God, were to be used mightily by Him in the salvation of countless souls.

Paul reminded the Corinthians that “God hath chosen the foolish things of the world to confound the wise; and God hath chosen the weak things of the world to confound the things which are mighty” (1Cor 1:27). In the story of these believers, who took their stand on the Word of God in defiance of the state-sponsored churches with their machinery of compulsion, we can see God using the little things to perform a great work to His glory.