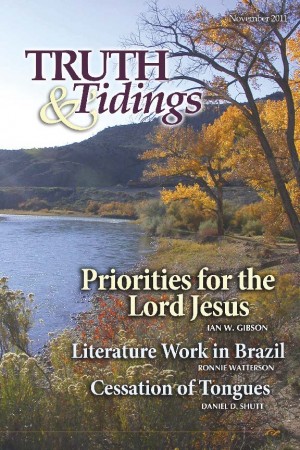 Literature has been very much to the fore, right from the start, of the work in this area. The benefits received individually revert to the assembly, as those who have been saved are added to the local testimonies, and those who have received further help from the literature are better equipped to participate in the activities of the assembly.

The need for gospel tracts was really what started the literature work, and now, because of ill health, I cannot travel as widely as in the past. It was this difficulty that turned us again to literature. If gospel literature was the means of leading many to Christ, we believed that, for believers, it could be the instrument used in God’s hands for building up the saints, many of whom live in areas where they don’t get much outside help and where there aren’t other assemblies close at hand.

This resulted, initially, in the production of a number of tracts and booklets with a view to helping the saints. These booklets dealt mainly with the uniqueness of an autonomous assembly, and doctrinal matters such as eternal security, the reception of the Holy Spirit immediately upon believing, His control of the individual believer, and His guidance in the assembly. After the booklets, we started making small books and, from there, moved on to larger ones.

The position at the present is that a fairly large number of small books and booklets have been published and are carrying on their silent work. The commentaries on the New Testament What the Bible Teaches (published in English by John Ritchie) have been translated and printed, and we are starting work on the Old Testament commentaries, and also on the Assembly Testimony books.

When Janeta and I started doing those little tracts we never imagined that the day would come when we would need to be involved to such an extent. We started off with a typewriter, then we got a computer, but then it got to the stage where it couldn’t be done from home anymore, so an old house was purchased and made into an office, in the town of Pirassununga, 35 km from Descalvado. Our son William (Bill) lives in this town and he is responsible for all the editing, publishing, printing, and distribution of the literature. Most of the smaller booklets can be printed “at home,” and Bill sees to all this and does it himself. Our two married daughters, Janice and Anita, are also a great help in the translations that need to be done. I often wonder how they get through so much. But it isn’t merely a family effort. Sam Davidson and his family have also been a great help in translating many books. Also, Terry Blackman and now some Brazilian brethren are beginning to take an interest in trying to help in the distribution of the literature in the areas where they work and visit.

We have seen the importance of literature not only in the spread of the good news amongst the unsaved, but also as a means of helping the saints in their edification and encouragement. Some believers, who had been saved for years, long before we met them, and knew nothing about a Scriptural assembly, have also been helped. Some have been led to gather with saints in New Testament assemblies. Perhaps, the best way to illustrate this would be to give some specific examples.

The most notable case was in Belo Horizonte, about 600 km from Descalvado. Although this happened a few years ago, it shows what happened, and is still happening in other places in the country. Some young married men had acquired copies of some of our literature, and were led to a closer study of the Scriptures. A few of them saw the truth quickly, but others were slower. They continued to study the Scriptures, and after several weeks of prayer regarding these matters, they eventually were all of one mind, and quite a lot of changes took place. They continued meeting in the same place, but they were growing rapidly; they built a hall in another part of the town, where they had been carrying on meetings. They are still spreading out, and there are now three assemblies where literature, both for the saved and unsaved, is very much in use.

A very encouraging case on the individual level happened recently in Pirassununga. A young married man found the website of the Editora Sã Doutrina (Sound Doctrine Publications). When he got in touch, Bill answered, and sent him some of our literature for believers. After an exchange of e-mails and many visits and conversations, he began to attend some meetings, and soon asked to be received into fellowship. He had been a member of a large evangelical group in Pirassununga. His father-in-law is a “pastor” of the afore-mentioned denomination and has read some of our literature, and he has also been to a few of our meetings and is seeking further guidance. He knows he is in a wrong position, but as you can imagine, is under much pressure at home and in his work.

And so we keep on sowing, by written and spoken word, praying that more souls may be saved and others who are saved may see the truth of a New Testament assembly and seek to gather with other like minded believers.

Now Christian you’re the message
Of God’s salvation plan.
Your voice may reach the thousands,
Your pen the world can span!