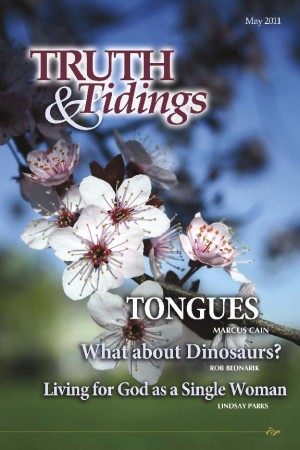 It was July 1998. I remember it as if it were yesterday. Two verses were powerfully upon my mind as I spoke at the Gospel Hall in Arlington, Washington. “Go ye therefore, and teach all nations, baptizing them in the name of the Father, and of the Son, and of the Holy Ghost: Teaching them to observe all things whatsoever I have commanded you: and, lo, I am with you alway, even unto the end of the world” (Matt 28:19-20). “Whatsoever He saith unto you, do it” (John 2:5b). I was encouraged by the many times God promised His servants that He would be with them; that the God of Abraham, Isaac, and Jacob is the same yesterday, today, and forever.

One week later, my wife Patty and I, along with our three young boys were driving to El Salvador. We began a new life, seeking to do whatsoever He would ask of us. Upon arriving in El Salvador we were greeted by missionaries Jack and Ellen Saword, Craig and Corina Saword, Hazel Brownlie, and Helen Griffin. I was immediately impressed with the different ways God uses those who are willing to put their lives in His hands.

In this brief writing, I will begin with a report of how God is working through the labors of two missionary sisters, Hazel Brownlie and Helen Griffin, and conclude with a little of the work God has placed in our hands.

God called Hazel to El Salvador in 1974. Leaving her homeland of New Zealand, she arrived in El Salvador with the exercise to teach children. Hazel touched many lives during her long teaching career, including 33 years of teaching at the San Salvador Christian Academy, a school she founded in 1979. We are thankful for the impact she had in the lives of many, including our own boys.

Since closing the school in 2007, Hazel has dedicated much of her time in Ateos, a small village about 30 kilometers outside of the capital city of San Salvador. Her activities include children’s Bible classes which reach over 100 children each Saturday morning. During the week she helps up to 75 children with their school work, followed by a Bible lesson. One of the most rewarding aspects of this work is seeing the Christian women and the young people, who help Hazel, develop their abilities and gain confidence. The director and the teachers of the school are very thankful for Hazel’s input in the children’s education. Over the years Hazel has given many children the opportunity to go to school by providing them with uniforms, shoes, school supplies, and often paying for their transportation.

Hazel also meets with women from the community to show them the love of Christ and to share the message of the gospel. These women’s lives are extremely difficult because of the daily pressure of poverty and the dangers of gang activity. The Lord has blessed in the salvation of some of these women.

We are thankful the Lord has given Hazel this opportunity to shine the light of the gospel in a dark community. Wisdom and direction are needed each day as she would serve the Lord in a gang-controlled environment. Please pray for this work, as Christ’s love is made visible in the community.

Helen left her home in Westbank, British Columbia with the exercise to work with orphans in San Salvador. The Christian Home for Children has now been in operation for about 18 years, and to date approximately 40 children have been lovingly cared for in this home. There are seven teenagers living in the home at this time. Helen has cared for some of these children for almost 14 years, with other children coming and going for shorter periods of time. Many of these children have professed faith in Christ.

Recently, the government has made major changes in the laws for institutions that care for children. Many of the present children in the home will be sent back to live with family members, and new children will arrive. The new arrivals will only be allowed to stay in the home for a maximum of two years, unless they have no family resources at all.

Helen is also active in her local assembly. She has a Sunday school class in Izalco that continues to grow. At the close of 2010 there were about 80 children in the Sunday school, ages 2 to 17. Also in the village of Llano Verde, approximately 30 kilometers from the capital, Helen has classes with about 40 children attending. Because of the heavy gang activity, there is a continual rotation of children due to families moving in and out of the area. In December during a week of Vacation Bible School there were about 80 attending daily. The Word of God was faithfully presented. Children received prizes, as well as bags of used clothing, Bible texts, and calendars. What a privilege we have to pray on behalf of others.

For the past 12 years, Patty and I have been helping in a number of assemblies, mostly in the eastern part of the country. When we first arrived in El Salvador we concentrated our efforts to helping the assembly in Los Jiotes. At that time the Sunday school was suffering, as all the work with the children was left to one brother. Little by little others were encouraged to help in the children’s work, and today there are about 100 children attending weekly. Several young people have professed faith in Christ and have been added to the fellowship. This past December three were baptized and have since been received into assembly fellowship. For this we give God all the glory.

At present we are helping in the Santa Tecla assembly, with two ministry meetings weekly, as well as Sunday school and Sunday night gospel meeting. We are thankful for the opportunities the Lord has given us, and would value your prayers as we seek to bring the Word of God to others.