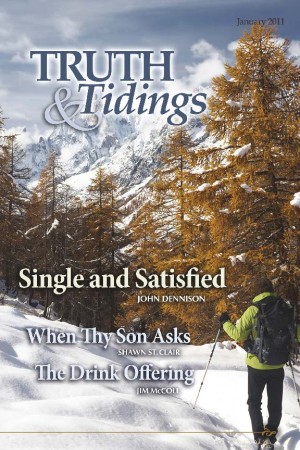 While Kenneth Lay and Bernie Madoff are not names in your assembly directory, the financial corruption of these men destroyed a company and vaporized many individuals’ life savings. What do these multibillion dollar fraud cases have to do with God’s assembly? Normally we don’t espouse business principles in God’s assembly. However, when it comes to money, a few basic accounting principles called “internal controls,” are in order. Assemblies need them to protect the testimony of their leaders from potential errors and false accusations from the outside. Paul understood this when he wrote, “providing for honest things, not only in the sight of the Lord, but also in the sight of men” (2 Cor 8:21).

Credibility: Who should be involved?

When looking for someone to handle the money of the assembly, one might decry the fact that no brother in the assembly is a Chartered Accountant or Certified Public Accountant. However, these were not the qualifications Paul looked for in 2 Corinthians 8 when he needed someone to take the Macedonian gift to the Jerusalem believers. He selected Titus, a man with an “earnest care” for the saints. He sent another brother who was “praised” of the churches for his work in the gospel. He was selected because the churches recognized his faithful service. A third brother was selected who “oftentimes proved diligent in many things.” When handling this financial gift, character did matter.

Another important principle regarding who should handle the finances can be drawn from the Law (Deut 17:6) and the Lord (Matt 18:16). Scripture repeatedly requires two or three witnesses to accept an accusation. The best way to defend or even prevent an accusation is to have a plurality (two or three witness) involved in every financial transaction. This means that the brother who deposits the money isn’t the only one who counts it. Decisions on disbursements shouldn’t be solely at the discretion of the one who writes the checks. Multiple brethren need to have input into all money decisions and ideally, those involved should not all be related by blood or marriage, which might give rise to concerns of preference or suspicions of impropriety.

Accountability: To whom do they report?

In the business world there are management operating reviews, legal financial filings, and audits where those responsible must explain all their actions to others who hold them accountable. Simply, accountability is giving an answer to others for the stewardship entrusted to them. The parables of the ten talents and the ten pounds, in Matthew 25 and Luke 19, clearly teach that all are accountable to the Lord for the use of whatever resources He entrusts to us. Therefore, it would be Scriptural for the elders to review the accounting records on a monthly or quarterly basis. It would also be reasonable to review the financial reports with the whole assembly on an annual basis. This can be done with formal financial statements or simple reports of collections and expenses by category. For those unsure of how to do this, there are simple but useful computer programs like Quickbooks and Microsoft Money. While I don’t endorse any one program, I do endorse the use of some program or method to produce timely, consistent, and easy-to-follow financial statements.

Repeatability: What is the process?

The assembly should have a process to count the funds each Lord’s day. The treasurer just doesn’t put the money into his Bible bag to be dealt with later in the week. Rather, several brethren should gather shortly after the meeting to count and record the offering. How many are involved in the counting, where it’s recorded, and how it’s deposited, should all be known by those in leadership. When it comes to writing checks, the assembly will need to decide if they want multiple signatures on all checks, or only those over a certain dollar value, or if only one signature would be sufficient. The basic purpose of the process is so that every time an event occurs (like the offering) the same steps are done, producing consistency and repeatability, even when the treasurer is away for an extended period of time or should he suddenly be called home to be with the Lord.

Traceability: What is the documentation?

Having transactions traceable is critical should a question ever arise or if there is an audit. Many assemblies in the United States have tax exempt status with the federal government and so they, and their members, are potential subjects for an audit. Traceability means there should be written documentation of every offering collected that can be matched to a specific bank deposit. There should be receipts for every disbursement. The treasurer shouldn’t be writing checks without a receipt, an invoice, or some paper trail. A note to those who care for the assembly property, buy Sunday school prizes, and anyone else who would incur costs for the assembly: don’t put the treasurer in a compromising position by asking for a reimbursement check without a receipt.

The requirement for traceability would mean that the treasurer would not co-mingle the assembly funds in his own bank account or that of his business. The assembly should have its own bank account used solely to support the assembly functions. Concern for traceability would also preclude the significant use of cash. A small petty cash fund for things like cookies and tea at break might be acceptable, but, still, receipts should be provided in order to document the need for replenishing those funds.

Finally, this documentation should be retained for a specific period of time in order to support any legal claim against the assembly or its members. The statute of limitations is the maximum time after an event that legal or tax proceedings based on that event may be initiated. This period varies by jurisdiction and by the legal nature of the issue. It might be wise to consider that the testimony of the assembly and the memory of individuals last much longer than any legal statute of limitations.

Every assembly exercising some simple accounting principles should be able to keep all involved above reproach, question, or accusation. The honorable handling of assembly finances brings glory to our Lord Jesus Christ.