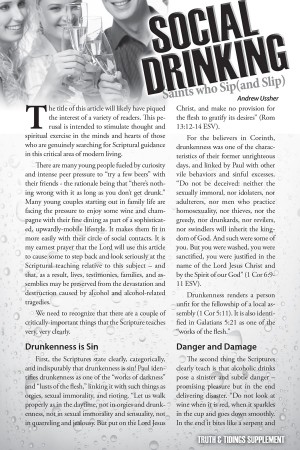 Saints who Sip (and Slip)

The title of this article will likely have piqued the interest of a variety of readers. This perusal is intended to stimulate thought and spiritual exercise in the minds and hearts of those who are genuinely searching for Scriptural guidance in this critical area of modern living.

There are many young people fueled by curiosity and intense peer pressure to “try a few beers” with their friends – the rationale being that “there’s nothing wrong with it as long as you don’t get drunk.” Many young couples starting out in family life are facing the pressure to enjoy some wine and champagne with their fine dining as part of a sophisticated, upwardly-mobile lifestyle. It makes them fit in more easily with their circle of social contacts. It is my earnest prayer that the Lord will use this article to cause some to step back and look seriously at the Scriptural teaching relative to this subject – and that, as a result, lives, testimonies, families, and assemblies may be preserved from the devastation and destruction caused by alcohol and alcohol-related tragedies.

We need to recognize that there are a couple of critically-important things that the Scripture teaches very, very clearly.

For the believers in Corinth, drunkenness was one of the characteristics of their former unrighteous days, and linked by Paul with other vile behaviors and sinful excesses. “Do not be deceived: neither the sexually immoral, nor idolaters, nor adulterers, nor men who practice homosexuality, nor thieves, nor the greedy, nor drunkards, nor revilers, nor swindlers will inherit the kingdom of God. And such were some of you. But you were washed, you were sanctified, you were justified in the name of the Lord Jesus Christ and by the Spirit of our God” (1 Cor 6:9-11 ESV).

Drunkenness renders a person unfit for the fellowship of a local assembly (1 Cor 5:11). It is also identified in Galatians 5:21 as one of the “works of the flesh.”

The second thing the Scriptures clearly teach is that alcoholic drinks pose a sinister and subtle danger – promising pleasure but in the end delivering disaster. “Do not look at wine when it is red, when it sparkles in the cup and goes down smoothly. In the end it bites like a serpent and stings like an adder” (Prov 23:31-32 ESV). It is a dangerous trap to think you can control alcohol – the Bible makes it clear that it can control you.

The Scriptures identify numerous examples of shameful, dishonorable, and disastrous results from those who were drawn in and deceived through the consumption of alcohol. Noah’s experience, in particular, dramatically demonstrates the sinfulness and shame of drunkenness, and the sinister danger of alcohol. This is the first time we read of wine in the Scriptures, and following the law of first mention, we therefore should pay careful attention to the lessons taught from this tragic incident. We do well to take heed to Noah’s experience in Genesis 9:20-21: “Noah began to be a man of the soil, and he planted a vineyard. He drank of the wine and became drunk and lay uncovered in his tent.” This mighty man of God had faithfully served His Lord and been uniquely used to preserve life on earth through the deluge of the flood. Yet he slipped tragically, and through the deceitfulness and treachery of alcohol, we find this spiritual stalwart lying naked and drunk in his tent, oblivious to his shameful condition and utterly unaware of his surroundings. Noah’s tragic failure provided his son an opportunity for sin, and the curse that resulted brought permanent and irreversible damage.

Add to this the experiences of Lot (Gen 19:33), Nabal (1 Sam 25:36), Elah, king of Israel (1 Kin 16:9), and Belshazzar (Dan 5:23). The consumption of alcohol is inextricably linked with the loss of control and the onset of excessive behavior. This is the thrust of the exhortation: “And be not drunk with wine, wherein is excess; but be filled with the Spirit” (Eph 5:18).

There are likely some readers just itching to ask if moderation in drinking is reasonable. Nobody would disagree that drunkenness is sin and that excessive drinking is totally unacceptable, but does the Scripture prohibit drinking in moderation? Is it sensible (or safe) for us to presume that we are permitted any behavior that we desire, provided it is not explicitly prohibited in Scripture? For example, does Scripture specifically prohibit the use of heroin or cocaine? In the vast majority of decisions we must make every day, we do not have a specific, detailed Scriptural endorsement or prohibition of the behavior we are contemplating. Rather, we are given clear Scriptural principles that we are expected to apply intelligently, guided by the Spirit of God, to the choices we face. Paul writes to the believers in Philippi, “And this I pray, that your love may abound yet more and more in knowledge and in all judgment; That ye may approve things that are excellent” (Phil 1:9-10). Hebrews 5:14 describes mature believers as those “who have their powers of discernment trained by constant practice to distinguish good from evil” (ESV).

In discerning the teaching of Scripture about alcoholic beverages, and many other issues, we must consider, carefully and prayerfully, the relevance of general principles in Scripture.

Scripture is very clear in instructing us on the proper attitude toward things that could lead to sin. As already noted above, drunkenness is clearly sin. Romans 13:12, 13 include it as one of the “works of darkness,” and Galatians 5:19-21 identifies it as one of the “works of the flesh.” We are warned to “make not provision for the flesh, to fulfill the lusts thereof” (Rom 13:14). In 2 Timothy 2:22 we are exhorted to “flee also youthful lusts.” It is very difficult to see how these Scriptures can be taken to mean – “it’s okay to have a few drinks socially as long as you don’t get drunk.” It seems much more reasonable to take them to mean “don’t play with alcohol at all, as it is deceitful, can lead you into grievous sin, and has the capacity to destroy you.” “Flee” is a pretty clear instruction; it’s not at all ambiguous! It does not mean “it’s okay to get close, but be careful.” It means, “get as far away, and stay as far away as possible!”

There are several passages in the New Testament that exhort believers to be sober (1 Thess 5:6; 2 Tim 4:5; 1 Pet 1:13; 4:7; 5:8). While in these passages the word certainly applies more broadly than just relating to the consumption of alcoholic beverages, its root meaning is unmistakable. The repeated exhortation to be sober means that, as believers, we are to be alert, clear-headed, rational, and self-controlled; these are the attributes of character that alcohol consumption quickly diminishes.

This is consistent with the teaching of Ephesians 5:18: “Be not drunk with wine, wherein in excess; but be filled with the Spirit.” It is interesting that the verb “be not drunk” in this verse is not the standard verb used for drunkenness. The emphasis here is not just on the state of being drunk, but rather on the process that leads to it. Mr. W. E. Vine in his Expository Dictionary of New Testament Words describes the verb as “an inceptive verb, marking the process” of becoming drunk. An interesting question to ask is, “what is the process that leads to becoming drunk?” Drinking! At what stage does that process begin? With the first drink!

The consumption of alcohol leads to a lowering of inhibitions, the impairment of judgment, the loosening of moral restraints, and the loss of self-control. There is no “magic number” of drinks where this process begins. The National Clear­ing­house for Alcohol and Drug Information in the US publishes “Impairment Charts” which ironically (and somewhat hypocritically!) are circulated by Liquor Control Boards in many states. Emblazoned in large bold letters across the bottom of these charts is the following warning: “Impairment Begins With Your First Drink.” This radical statement is not being made by some Bible-thumping religious zealot, it’s being acknowledged by the very industry that provides the liquor!

Romans 12:9 contains a very simple exhortation: “Abhor that which is evil.” The verb “abhor” is very strong; it literally means to “shudder with hatred toward something.” There are few things in society more evil than alcohol. It wreaks havoc on families, individuals, communities, and nations. More than 100,000 deaths are caused in the US each year through excessive alcohol consumption. The National Highway Traffic Safety Administration in the US estimates that a person dies every 33 minutes nationwide in an alcohol-related motor vehicle accident. An additional 310,000 people are injured in crashes each year where alcohol is a factor. As we know all too well, it’s not just those drinking the alcohol who are affected. Innocent lives are snuffed out by drunk drivers, children and spouses are victimized by alcohol-abusive fathers and husbands, violent assaults and crimes are perpetrated constantly by those under the influence of alcohol. The instruction to the believer from Scripture is unmistakably clear: abhor that which is evil! 1 Thessalonians 5:22 makes it even more direct; we must “abstain from every form of evil” (ESV).

One other principle we need to honestly and candidly assess in our decision-making relative to social drinking is, “Why would I choose to drink?” If the answer to this question includes any sense of wanting to fit in with friends or to avoid social stigma or mimic the lifestyles or culinary habits of people around me, then I need to step back and see these forces for what they are. The Scriptures make it very clear that the world exerts tremendous pressure on believers and seeks to press us into its mold at every opportunity. Resisting this pressure is absolutely paramount to spiritual survival. Even if this was the only reason to abstain from alcoholic beverages, it would be abundantly sufficient!

“It is good neither to eat flesh, nor to drink wine, nor any thing whereby thy brother stumbleth, or is offended, or is made weak” (Rom 14:21). This is a very important principle in the whole area of social drinking. Tragically, some believers are influenced to drink alcohol not only by their exposure to unsaved associates at school or at work, but also by their circle of “Christian” friends and mentors.

Few things, other than alcohol, run a greater risk of causing another believer to stumble or be made weak! Even if you think you can manage your consumption and have no conscience about moderate drinking, what if someone you influence does not have this ability and they slide down a destructive path to alcohol abuse and all that it brings? Are you prepared to bear that responsibility?

Some will say, “Didn’t Jesus turn water to wine?” Or, “Didn’t Paul tell Timothy to take a little wine?” I would urge the sincere reader to look into these passages carefully and consider the suggested arguments Scripturally. None of them present justification for consuming the alcoholic beverages common in today’s society.

Some will also plead that in many cultures in Europe, wine consumption is a normal part of family life. To these I would respectfully say, “I am not dealing with these cultures.” North American culture is my focus here and my prayer and burden is for many lives to be spared the heartache, destruction, pain, and devastation that can result from taking that first drink.