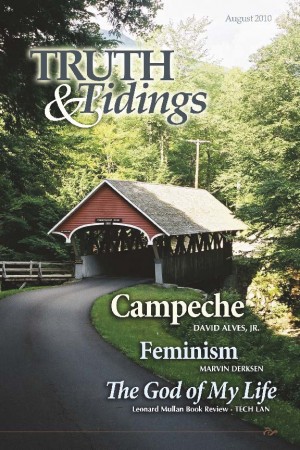 The God of My Life is a must-read for anyone who is contemplating full-time service for the Lord. With perfect blending of hearts, Leonard and Agnes Mullan proved God in their lives as they complemented each other in devotion, faith, and exercise when they felt the deep conviction to serve the Lord in Japan. By no means a simple decision when all odds were against them, they were convicted that it was the will of God. They saw Him with them all the way, from the very beginning of their preparation to move to a totally foreign land of unknown culture and language, to the time when they saw the fruits of their labors after 30 years.

Leonard Mullan was born in Carnlough, N. Ireland, by the sea. He was converted at the age of 12 and was deeply exercised about Japan. The man who made an impact upon him in this direction was Robert Wright of Carrickfergus. Leonard saw that God’s saving grace toward him was for the purpose of winning others for Him. Thus, he set himself to study the Japanese language with some brethren of the same exercise, in anticipation of his calling. He proved God in this. God soon opened the way for him and Agnes. He experienced divine leading all the way when he saw all things falling into place. The secret of this was his devoted and godly life.

Of course, Leonard’s exercise was not without discouragement. At the time of the Spirit’s prompting, England was at war, and Japan was its enemy. There were many horror stories of the cruelty of war and the unscrupulous acts associated with it. Setting aside this concern expressed by many, he made bookings for the family to Canada, en route to Japan. Brethren who were exercised about overseas missionaries raised concerns about various obstacles and difficulties, discouraging him from going and advising him to cancel his booking.

Despite the stumbling blocks, Leonard and Agnes, with a strong conviction of the Lord’s will, and the fellowship of two assemblies they were closely associated with, launched out to go to Japan and never turned back. From then on the Mullan family had the blissful joy of knowing the hand of God upon them every step of the way. They saw the blessings of God on both Japan and themselves.