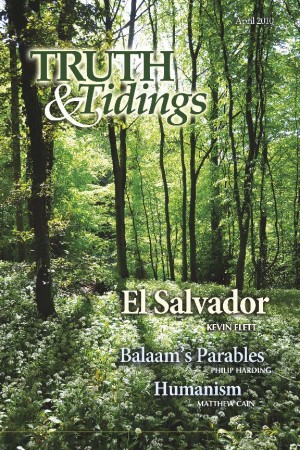 The bloody Korean War ended with an armistice in 1953, and the God of sovereign grace, in His mercy, turned this tragedy of war to useful ends. With international aid coming into this war-torn country, He sent His servants to Korea with a “clear gospel message” which virtually had disappeared for the first seven decades of Presbyterian dominanted religious history in Korea.

In 1964, a handful of believers gathered together in His Name in Seoul. It was a historical moment when the light of NT assembly testimony first shined in Korea, after a period riddled with dark superstitions, dead religions, and the occasional flickering light of Christianity. Forty-five years have passed. Reflecting on the short assembly history in Korea, I praise the Lord of grace Who richly blessed many. I have deep gratitude for all the labors and sacrifices by the early saints. Yet, at the same time, I bow down in His presence while repenting for our failures, seeking the Lord’s forgiveness and mercy.

It was a sad time when a brother, formerly used by the Lord, established a training institute with a view to producing future assembly leaders in Korea. This initiation brought a deep negative impact causing widespread division among the saints and assemblies. In this challenging period, I began to ask the Lord: “Is the Lord of the assembly sufficient for all needs of assembly testimony in Korea?” Tragically, the brother who founded the training institute was involved in a moral scandal in 1977. Soon after his fall, several other workers were ensnared by Satan into similar sin. His tragic fall and hasty exile to the United States, without being received back in his home assembly, had a dark impact upon the brethren in Korea. His downfall discouraged many saints. During his little more than a decade of sojourn in the United States, he was responsible for creating divisions among Korean brethren in North America. Believers in assemblies in Korea began to doubt the true value of the assembly and sought refuge in denominational theological schools while furnishing many plausible excuses as to why such education was necessary. Gradually, this new trend obtained a foothold in the assembly and amongst many of the saints. In the early 1980’s, a few brethren even attempted to establish a theological school. This experiment eventually failed. But some brethren shamelessly advocated adopting things from Christendom to improve the assembly. When the assemblies were hit by this sore famine, many Elimelechs migrated to the place of their desire. Our “Midian” apparently infiltrated into Korean assemblies without sparing the saints from strife and conflict.

In the early period of assembly history in Korea, saved clergymen joyfully found their way into assembly fellowship, responding to their consciences in light of the truth of God. Now, some brethren in assemblies brazenly flaunted their education from divinity schools. Surely we lost sight of Him and the fervor of our first love! We ignored the presence of our able Lord Who provides for the needs of assemblies.

How different our path could have been if we, as Korean assemblies, had acknowledged our failure and returned to the Lord! Failure of some brethren should not have meant that there were defects in assembly truth. We simply failed to differentiate the gifts from the Giver. In our dishonesty, we covered up our failure of unbelief and tried to find the human solutions rather than God’s answer. Looking back, I praise the Lord for allowing the preaching of the gospel and its fruit in the past. Yet, I painfully admit that in early assembly history there was an imbalance between gospel preaching and teaching ministry. Teaching ministry stressing godliness, especially in family life, and for assembly truth, was relatively weak. The Lord, with His eyes as a flame of fire and feet of fine brass, walks among the assemblies. Before this Lord, I confess our failures and sins. My desire is to prove that our sovereign Lord is surely sufficient for all of our desperate needs. I must admit that our present difficulties didn’t evolve suddenly. We cannot deny that these realities were the inevitable results of weakness in assembly truth for a lengthy period of time. I cry unto God with a contrite heart over these failures. It is imperative that we return to the very place where our path was marred. My earnest prayer in His Mercy is to taste His sweet presence and experience His ample sufficiency in the assemblies there.

The future will be bleak for our coming generations if we are merely satisfied with the numerical expansion of assemblies without holding NT truths. The assembly testimony shines only when the brethren love and honor Him, build an assembly according to NT pattern, cherish it as our Lord did, and rely upon the Lord’s sufficient provision. But even in our failure, praise God, there is a road for our recovery.

I trust that the Lord will prove Himself to those who depend on Him and His sufficiency. Our humble return to His Way becomes a part of our collective testimonies despite our sins and failures. I expect that in our recovery of truth, the Lord will preserve us from reverting to human means. May our gracious Lord strengthen our dear brethren there!