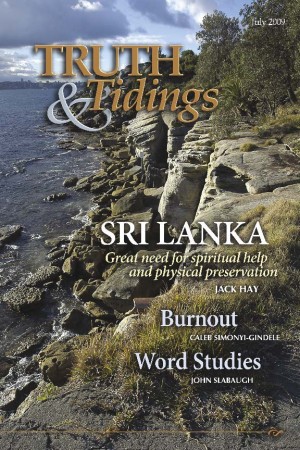 John, guided by the Holy Spirit, had lofty goals as he took up his pen to write of the Son of God. One of his many purposes was to show Christ replacing everything that was important to the nation of Israel.

Each chapter of the Gospel record reveals some fresh glory of the transcendent Son. When we arrive at chapter 6, He feeds a multitude with five loaves and two fish. It is only John who tells us that they were barley loaves and that the fish were small. His greatness does not preclude His using even the meagerest of what is given to Him.

His miraculous provision for the five thousand is followed by His majestic march across the angry waves to meet His disciples. But was His walk more majestic than the words which followed while speaking to the Jews? “I am the Bread of Life!”

With that wondrous proclamation in mind, rewind to the end of the feeding of the five thousand story. There were twelve handbaskets taken up. Each one who ate had “as much as they would” (v 11) and they were “filled” (v 12). When all had eaten, there was an abundance left over. Each disciple received one basket for his efforts (a true euphemism) that day.

What then is the lesson of this portion of chapter 6? It is that He is the Inexhaustible Christ! Men could feed on the bread He provided and never exhaust the supply. There is that about Christ which is incapable of being exhausted. He has eternally been the Bread of God – that which the Father has delighted and feasted upon. He will eternally be the object of the Father’s delight and joy. Infinite Persons finding infinite joy in each Other for infinite ages!

Why then am I so hungry and famished? Why do I look so lean spiritually in light of all there is in Christ? What appetite spoilers, junk food, nauseating snacks have blunted my appetite and hindered feasting upon the true Bread? Why am I so “lean from day to day” (2 Sam 13:4)?

If my soul genuinely appreciated the inexhaustible supply there is in Christ, my soul would be filled, my relationships blessed, and the assembly in which I have fellowship would be marked by a spiritual wealth that would bless both saint and sinner.