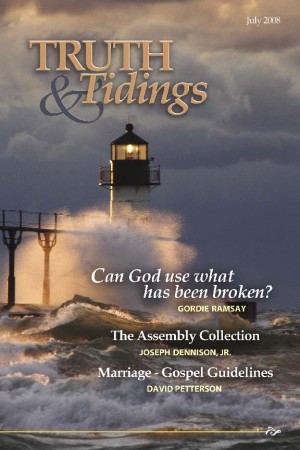 It will never happen to us.” How many couples have repeated these words about divorce after repeating their vows in marriage? But the facts do not lie. The most recent report from The National Center for Health Statistics states that, “Forty-three percent of first marriages end in separation or divorce within 15 years.” It does not require extraordinary insight to determine why these rates are so alarmingly high. I remember being taught in business classes, Abraham Maslow’s “Hierarchy of Needs” motivation chart. Self-actualization (better termed “self-fulfillment”) was elevated to the summit of the pyramid as the pinnacle of human experience. We need not turn our heads very far to witness the glorification of self-fulfillment within our 21st-century culture. Indeed, it is the god of our age. As a result, commitment to marriage is often made conditional to the question, “Am I getting what I want from this?” Unfortunately, divorce and remarriage have become, for many, another way to fulfill their “wants,” and in the process the most sacred of institutions has been treated so carelessly.

This laxity concerning marriage also pervaded the society in which our Lord Jesus lived. Marriage had been degraded so severely that husbands were able to divorce their wives “lawfully,” for the flimsiest reasons. Taking a twisted view of Deuteronomy 24:1, a husband could put away his wife if she accidentally served him a slightly burned meal, or if he became attracted to a more beautiful woman. Self-fulfillment is not only the god of our age! This unsatisfactory view about marriage also had an impact on the disciples of our Lord (see Matt 19:10). The statement they made revealed the extent to which their thinking had been influenced by their society. Undeniably, our society’s attitude toward marriage has affected present-day disciples of our Lord as well.

The Lord Jesus’ teaching on marriage in the gospels is as relevant today as ever. What the public practiced and what Christ commanded were worlds apart then as they are now.

Christ Expects Marriage to Be a Proper Relationship

Contrary to the opinions of our politically correct world, Jesus taught that marriage was properly the union of “male and female” (Matt 19:4). There is no hint in His words or elsewhere in Scripture that God-ordained marriage could include sinful same-sex “unions.” Today’s same-sex “marriages” are nothing more than an attempt to legitimize and legalize a sexually perverse relationship that gratifies self.

Christ Expects Marriage to Be a Permanent Relationship

The Bible’s firm declaration on the permanency of the marriage bond is presently under attack as it was in Jesus’ day. Mark records an occasion on which the Pharisees came to Jesus “tempting Him” (10:2). Mark uses this verb (peirazo) on four occasions. Three times it refers to the Pharisees in their attempts to ensnare Christ (8:11; 10:2; 12:15), but its first use describes the activity of Satan (1:13). The parallel goes beyond the use of the same verb. The Pharisees’ activity in chapter 10 involved the same mishandling of Scripture which had characterized Satan’s approach. The Pharisees’ question to Jesus was, “Is it lawful for a man to put away his wife?” (Mk 10:2). However, the primary question should never be, “What does the Bible permit?” but, rather, “What does the Bible proclaim?” Therefore, Christ’s answer turned them back to God’s original intention for marriage and to the permanency of the marriage relationship. In quoting Genesis 2:24, Jesus used three expressions to emphasize this permanency. First, He spoke of a man “cleaving” to his wife. This verb (proskollao) means “to glue” or “to adhere.” In marriage a man becomes “glued” to his wife. Second, Christ spoke of the two now joined as “one flesh.” This means that even as your body is one “whole” and cannot be divided and still be a “whole,” so this is how God intended a marriage to be. There is now one entity (a marriage). Third, the conclusion He draws is, “What therefore God hath joined together, let not man put asunder” (Mk 10:9). Christ is summarizing the divine revelation concerning the marriage bond. Whereas Mark 10:7, 8 sees the action from man’s perspective, verse 9 sees it from God’s. The term “joined together” (suzeugnumi) means “yoked together” as a farmer would do with a pair of oxen or horses. According to Christ’s teaching, husband and wife form a team. They work together, pull together, plan together, pray together, and stay together in what God intends to be a permanent relationship. The goal is never to be self-fulfillment but spouse-fulfillment.

Christ Expects Marriage to Be a Pure Relationship

One of the primary purposes in the Sermon on the Mount was to show the holiness of God’s Law, and thus to demonstrate our utter inability to keep it. In His address He spoke of the sin of murder and how we can be guilty of breaking God’s law not only by a murderous act, but by a murderous attitude (Matt 5:21, 22). He also addressed the sin of adultery and showed how it is possible by a lustful look to commit adultery in our hearts (Matt 5:28). Christ’s exposition of just these two commandments should be enough to show us how incapable we are of keeping God’s law. However, it is not acceptable for us to conclude that because we cannot keep His law, there is nothing we can do about it. Jesus does not leave us without instruction. The marriage relationship is to be so pure that because a lustful look causes me to commit adultery in my heart, then I am to pluck out the eye that causes me to sin (Matt 5:29). Although not to be taken literally, the Lord intends us to rid ourselves of whatever jeopardizes the purity of the marriage bond. The only way to effectively deal with the problem then is at the source of the sin, the eyes. This may require the sacrifice of some otherwise legitimate things. Our world, obsessed with self-fulfillment, will tell us that we must have these things to be happy. To begin with, our happiness is not God’s primary goal for us. He is interested in our holiness. That holiness ought to be demonstrated in a proper, permanent, and pure marriage relationship.