The book of Malachi deals with the descendants of those who had returned to Jerusalem from Babylon, an account of which is found in the books of Ezra and Nehemiah. It is a sad reminder of the danger that following generations, although able to enjoy the fruits of revival, will nevertheless suffer spiritual decline. The fact that correct spiritual ground is being occupied publicly is no guarantee that the soul is in a right spiritual condition.

The days of Malachi were marked by service without concern (1:6). The Lord was not being honored as He should and there was no fear of God. It was also service without cost (1:7-14). The blind and the lame were being offered as sacrifice. It was service without consecration (2:10). The priests refused to give glory to the name of the Lord of hosts. The spiritual condition of the people reflects much of what can be seen today, even that which takes upon itself the name of “Christian.”

Spiritual decline, and lack of respect for the Word of God generally in society, is reflected in attitudes to marriage. As marriage is part of God’s creation order and a picture of the relationship between Jehovah and Israel (Jer 3:14) and between the Lord and the Church (Rev 19:7), it is attacked by the Adversary. Today it is treated almost as an irrelevance. Marriage vows are not respected and are broken as if they are incidental. This was the situation in Israel when Malachi wrote.

Divorce had become widespread, so much so that the Lord speaks of His altar’s being covered with tears, weeping and crying out, as abandoned wives brought their sorrow to the sanctuary (2:13). Let all be aware of the fact that when a husband or wife determines to break up a marriage it brings with it anguish, sorrow, and weeping. The effect on the one who has been abandoned is profound. The sense of betrayal is overwhelming.

The Lord asserts the sanctity of marriage, reminding husbands and wives of four features of their relationship, too often forgotten (2:14). First, the Lord was witness “between thee and the wife of thy youth.” He was a witness to the marriage and the vows were taken before Him. It was a solemn act to enter into a vow. That He was witness must never be forgotten. This is still true today! Vows may be treated lightly by the unbeliever but must always be honored by a believer.

Second, the use of the expression “the wife of thy youth” brings to mind the first love of youthful days. So often the joy of youthful love can be forgotten as the years pass and responsibilities and cares mount up. The Evil One may use these pressures to distance husband from wife. The Lord remembered Israel’s first love (Jer 2:2) and felt keenly its loss. It is possible to have this restored if husband and wife recognize the symptoms and together ask the Lord to restore that early love with all its freshness. Yes! It can be done but there must be willingness on the part of both parties to regain what has been lost.

Third, a wife is a “companion.” She has shared the experiences of life. Together they have known its joys and its sorrows. They have learned lessons in the school of God and have come to know Him better and understand His Word with greater spiritual intelligence. The Lord has been with them and will at times have used one to teach a lesson to the other. Believers who have in this way shared the experiences of life will have bonds that grow deeper as time passes. It should also be observed that a husband and wife are the companion of each other. The closest friend that each has, the companion whose company is enjoyed and the one who can help dry the tears of life, ease the burdens, share the work of the Lord, and have joint memories of enjoyment of the Lord.

Fourth, a wife is “the wife of thy covenant.” It has already been emphasized that the vows made were voiced before the Lord. Now, however, it is emphasized that marriage was a covenant involving both parties. Husband and wife vowed and made binding commitments to each other. A husband must never break that vow and “deal treacherously against the wife of his youth” (2:15). The same principle is binding on a wife. The Preacher in Ecclesiastes understood the solemnity of a vow: “Better it is that thou shouldest not vow, than thou shouldest vow and not pay” (Eccl 5:5). The consequence of doing so is noted by the question, “Wherefore should God be angry at thy voice, and destroy the work of thine hands?” (Eccl 5:6). It is a solemn thing to break the marriage vows and it will have repercussions.

Malachi’s message brings with it a word of warning. Do not make vows rashly, without due care and consideration. Those who are contemplating marriage must weigh up all the issues with prayerful care. Too often a spiritual young brother or sister has led a blighted life because of marriage to a professed believer who has little interest in the Lord or His assembly. Where there are great differences of background, these need not prevent marriage, but the issues have to be faced by both parties before the vows are made.

The teaching of Malachi is relevant today and should be brought before all believers who are planning to marry. The Lord “hateth putting away” (2:16). When marriages become unhappy the answer is never for believers to turn to the law. The answer is for both to turn to the Lord before other actions further darken the horizon. Submission to Him will restore first love and ensure the joy of the Lord in the relationship between a husband and the wife of his youth, his companion, and the wife of his covenant. 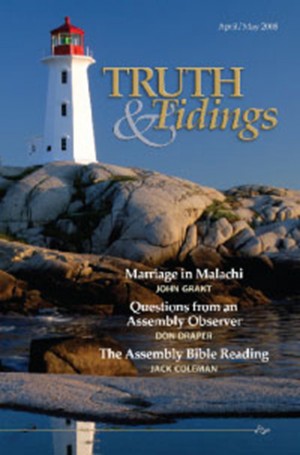