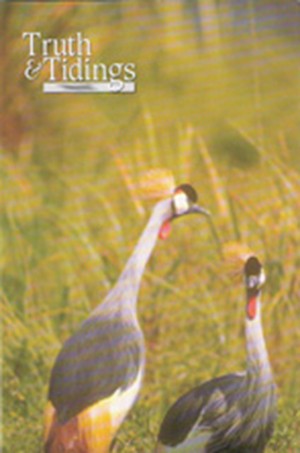 From a logical viewpoint, I question the strength of these reasons given by my respected and beloved brothers. Every occurrence of “the kingdom of heaven” is a quotation, either from John the Baptist (once) or from the Lord Jesus. Since these and the parallel passages are both verbally inspired, the Lord must have used both statements attributed to Him. To say that A is at hand and B is at hand does not mean that A and B are identical. One might be the Easter weekend and the other a birthday that falls this year on Good Friday.

Also, if we picture two circles that do not completely overlap, the parts that overlap will have the same properties, but that doesn’t make the circles identical. Identical statements about the kingdom of God and the kingdom of heaven don’t make them identical.

The Lord makes a universal statement that no one can enter the kingdom of God except by the new birth: “Except any one . . .” (John 3:5 JND). His statement about entrance to the kingdom of heaven (Mat 18:3) is not worded the same, being directed to his hearers: “Except ye . . .”

To what does the kingdom of heaven refer?

Scripture is precise; similar terms either feature different aspects of the same person or thing, or they deal with something different. The 33 times the Authorised Version has “kingdom of heaven” are all in Matthew. Matthew is appealing to the Jewish mind, referring so often to the fulfillment of Scriptures.

This is not the only connection between Daniel and Matthew. Both were Jews employed in Gentile governments during the times of the Gentiles. Daniel served in the first two and Matthew in the last of the four kingdoms in Nebuchadnezzar’s dream (Dan 2). Matthew is the only one who records the Lord’s words, citing Daniel specifically, in his prophetic outline of the future (24:15).

In light of the parables in Matthew 13, the kingdom of heaven could extend from the beginning of the 7 years of tribulation coming on the whole world (“in the days of these kings”) and include the kingdom of the Son of Man, the millennial kingdom. As such, it includes the time when the God of heaven exerts His authority on earth to break Gentile power; it corresponds to the time span of the Day of the Lord.

What is the significance of the kingdom of heaven to us?

Why was the kingdom of heaven important to the Jews when the Lord was on earth?

Matthew affirms that Jesus, Who “shall save His people from their sins” (1:21), is the Christ Who fulfilled the ancient prophecies in His coming, His life, His words, His miracles, His death, and His resurrection and ascension. He is the coming, glorious King. To reject Him meant forfeiting all their spiritual blessings (21:33-44) and missing the kingdom and its festal joys (22:1-13). Our Lord Jesus Christ was their only means of enjoying the long-promised earthly kingdom. Only by faith in Him could they join those who will hear Him say, “Enter thou into the joy of thy Lord” (25:21).