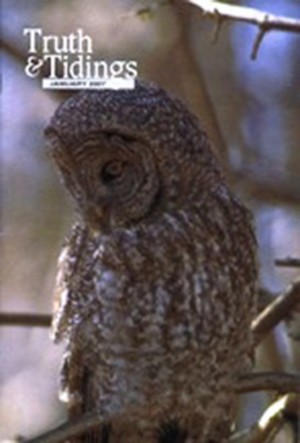 The Maritime Provinces have a population of about 1.8 million. In Nova Scotia and PEI there are pockets of French-speaking people, while in New Brunswick, about one half of the people speak French. In the northern part of the province there are regions where French is spoken exclusively. The majority of the people are of Irish, Scottish, English, and French descent, with large percentages coming from various countries of continental Europe. More recently, there are increasing numbers coming from the Middle East and Asia. Historically, most of the population has been either Roman Catholic or Protestant.

Among the assemblies who meet in the Gospel Halls, the work began in the late 1800’s and early 1900’s by pioneers such as John Knox McEwen, David Scott, Isaac McMullen, and William Brennan. Others labored in those early difficult and testing times. From 1930 and onward the workers included L.K. McIlwaine, Albert Ramsay, John and Robert McCracken, Robert McIlwaine, Frank Pearcey, and Douglas Howard.

Since the early days of assembly testimony, a number of other local workers have been raised up within the region. Some have served their generation and have gone home to be with the Lord. In recent years the region sustained the loss of Floyd Stewart of Amherst, Nova Scotia, Albert Ramsay of PEI, Bill Bingham of Tatamagouche, Nova Scotia, and Peter Orasuk of PEI. God has graciously raised up others in the past decade.

There are presently a number of full-time, commended workers in the Maritimes. In New Brunswick, Murray McCandless, Jonathan Procopio, Gerard Roy, and Leslie Wells labor full time, the latter two primarily among French-speaking people in northern New Brunswick. In PEI the full-time workers include Robert McIlwaine, who is somewhat limited by advancing age and declining health, as well as Noel Burden, David Hierlihy, and Peter Ramsay. In peninsular Nova Scotia the full-time laborers include James McClelland, Kenneth Taylor, David Hunt, Albert Hull, and Matthew Cain. On Cape Breton Island, Fred Bartlett and David Swan labor full time in the gospel. There are others, both brethren and sisters, from the area who are presently serving the Lord on the mission fields of Africa, Venezuela, and Mexico.

Many of these are in rural or small town areas and some are struggling because of declining numbers. Younger people go to the cities for university, college training, and for employment. The region, and in particular some rural areas, have suffered from limited economic growth. This has had a negative effect on employment opportunities. The out-migration of younger people has left some assemblies struggling. Local believers who have stayed and have maintained the testimony are to be commended. They are keeping His Word and have not denied His Name. In the Maritime region there are a number of young people and young married couples with spiritual desires and we trust they will keep themselves in the love of God and eventually become the backbone of the work of God among the assemblies in the region.

When we look to the future, it is to be noted that, in the past, older workers have taken with them younger men who have shown some evidence of gift in the gospel and who also had a burden for reaching souls with the only message that can meet their needs. Hopefully, this will continue. One can easily see that even though there are approximately thirty assemblies that we have mentioned in this region with less than two million people, there are vast areas that are untouched by a gospel witness. How can the people be reached? Often the initial contact can be made through mall exhibits and other presentations. Children’s work can be an effective way of introducing families to the message. Seed Sower blitzes can put the Word in the homes of a large number of families. Labor is required! An evangelist recently wrote as follows: “I think that anywhere that is going to see a work done takes a lot of consistent plugging. The two key words are consistency and plugging. Going once a year into a new area is not enough. Plugging means living there, doing door-to-door contact, and showing a neighborly attitude!”

We need, however, to ask ourselves some questions. Are we, like others in so many parts of North America, leaving the work of evangelism solely to the full-time evangelists? Are we satisfied with having a series of gospel meetings periodically inside a Gospel Hall and then comforting ourselves with the misconception that we are thereby fulfilling our responsibility? Have we failed to “lift up our eyes and look on the fields that are ripe already to harvest?” (John 4:35). Are we in apathy failing to imitate the attitude and activities of the lepers who said one to another, “We do not well: this day is a day of good tidings, and we hold our peace … ” (2Kings 7:9)? In some of the larger centers there are a number of immigrant families. Some of these have come to Canada with a desire to know the Unknown God. A consistent weekly Bible Study in the homes of these and other interested persons, taking them systematically through the Gospel of John, would be a valuable labor in the presentation of the gospel. The Word is “living and powerful, and sharper than any two-edged sword” (Hebrews 4:12).