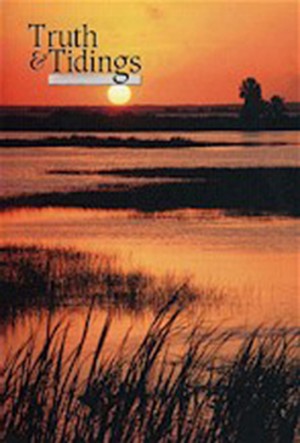 Having known Ken Moore and his wife Doris from the time of his conversion to God, I count it a privilege at the end of his life to write a few words about him. Ken was saved in 1960 in meetings held by the late George Shivas and Stan Simms. At the time of his conversion, Ken was an elder in the United Church and believed he was as sure of heaven as anyone. But when the preacher spoke on “Ye must be born again” and “All our righteousness are as filthy rags,” he discovered he was not bound for heaven. A few nights later he came to Christ through the truth of Revelation 3:20. Shortly after, he was baptized and received into the fellowship of the assembly at Chapman Valley.

Before his conversion, Ken had worked with his truck close to home. But God, Who had other plans for Ken, gave him a job with the KVP Company, drawing logs in one of their large bush camps. The camp was located many miles from home, north of the city of Sudbury. He was required to stay there all week long, returning home only on week-ends. It was here however, living before ungodly men with whom he himself would once have drunk, that God exercised his heart to go forth with the gospel. The assembly at Chapman Valley learning of his exercise, commended him and his dear wife to the grace of God and the work of the gospel.

In 1982 Ken and Doris moved to Sudbury, where my wife and I were living. There Ken and I first joined together for an effort in the gospel. The assembly had decided that they needed to branch out with the gospel and planned to purchase a four-thousand-dollar tent for this purpose. With this in view, the elders announced that in seven weeks the offering would go toward the purchase of this tent. The assembly numbered only eighteen, some of whom were still in school. The morning of the offering only thirteen were present, but the amount totaled four thousand three hundred dollars. It enough to purchase the tent, pay the duty to bring it over the border, and put fuel in the vehicle to go and get it.

Ken and I preached in it that summer and God saved a number of souls, some of whom are in the Sudbury assembly today. Over the next few years, Ken had several series in the tent and God again blessed in salvation.

Ken also had a deep compassion for God’s people, especially for new converts, that they might go on well. After that first tent series, the next few months were spent night after night in one home or another of the new converts. The coffee or tea pot would go on, the Scriptures be opened, and the simple truths of God poured into souls. When that first tent season had passed, Ken asked me, “Would you be interested in getting the old Town Hall, located near where we had the tent, as there is still an interest among some that are not saved?” We did, and God again saved souls.

Later I learned that Ken, who was always generous in the work of the Lord, had paid the rent for the Town Hall out of his own pocket. Ken, through his exercise, wisdom, and hard work in the gospel, had a great part in seeing the assembly at Sudbury grow during the next few years to over forty in fellowship.

The last recollections I have of Ken in the gospel are from a series we shared at Eden Grove, Ontario, in February of 1998. By this time Parkinson’s disease was seriously affecting his movements on the right side. He said to me on one occasion, “I have to tell my right foot or my right hand what to do and then wait for it to do it.” Our host was making maple syrup; the season had arrived early and he was short of help. Ken, never a slouch when it came to work, did what he could, helping make syrup by day and preaching at night.

After Ken could no longer preach in a gospel series, one of the common questions I was asked as I moved among God’s people was, “How is Ken?” He had seen souls saved in many places. His ministry has helped many of God’s people over the years and he is deeply missed by the many whose lives he personally touched.