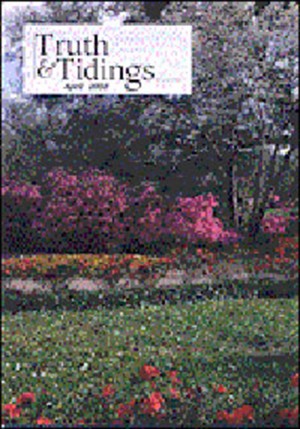 The readers of Truth and Tidings are probably not aware that there is a constant on_going work among indigenous tribes in the Amazonas region in Venezuela, nor that our fellow laborer, Jose, seeks to take the gospel into even more remote areas in the Amazonas State.

In Amazonas, one of the most remote parts of Venezuela, Jose Herreira works among indigenous groups, and several years ago he saw an assembly formed at Puerto Lucera, on the Orinoco River. At that point the river is the international boundary between Venezuela and Colombia, and the area has its troubles due to drugs. The indigenous peoples have liberty to move between the two countries and often have identification in both. The assembly there is small, but represents two different tribes: the Piapoca and the Saliva. The two elder brethren represent both these tribes. One speaks both native languages and, of course, they both speak Spanish as do all the believers there, and all meetings are carried on in Spanish.

Jose has been exercised for some time about getting a piece of ground in the state capital, Puerto Ayacucho, where he lives. Recently he found a fair-sized site in a central location which is for sale. Latterly he has traveled further into the interior and, with other brethren, he is also exercised about getting a suitable site in San Fernando de Atabapo. This is a town which is reached either by plane or by a three hour river ride, as there is no road. It would open a new area for gospel work in Amazonas.

Brother Nehemias Sequera has been working in Santa Elena on the border with Brazil. A new hall is under construction there and he has been encouraged by seeing the hand of the Lord with him. The work that developed in a remarkable way at Santa Rosa del Buey, near Upata, is fruit of his labors. Others helped in cutting out trees, and the hall there is made of upright boards and is completely of wood. He visits Los Manantiales where he saw a small hall built several years ago. For some time he was exercised about large districts in the city of Ciudad Guayana, where he lives, and finally was able to secure a small site where a childrens class is now maintained.

Brother Julito Figuera has remained faithfully with the work on Margarita Island. The “Margaritenos” are difficult to reach with the gospel and as yet there is no assembly there, but there is a hall at Achipano, Porlamar, where the believers maintain a weekly Bible reading and prayer meeting, childrens class, gospel meeting, and, on Sunday morning, a Bible reading. An assembly will soon form there, God willing. Crossing to and from the mainland is by ferry, which generally takes five hours. As the children are in school, the family frequently spends months at a time without coming to the mainland, which means months without breaking bread. Throughout the year there are not many visits, but brother Noel McKeown has accompanied Julito in gospel work on the Island. They have had meetings at La Asuncion, the capital, at Macho Muerto, Los Cocos and other parts. They have been encouraged by the profession of a woman in whom they had an interest, in Los Cocos.

In the area Guanare-Guanarito, local brethren have been active in the gospel and have made visits to El Fraile and La Ceiba, where they have seen blessing. In Guanare, they were able to buy a small one room house and make it over for a Gospel Hall. It’s on the main street in the middle of three large districts that are full of children. Attendance at recent meetings there was most encouraging, and there was blessing in the gospel. This aspect of new work in Venezuela should not be overlooked. The Venezuelan Christians love the gospel and the larger part of new work is due to the desire of believers to carry the gospel to their own families. Childrens work in new districts has been a prime factor in developing the work, and has contributed to the formation of assemblies.