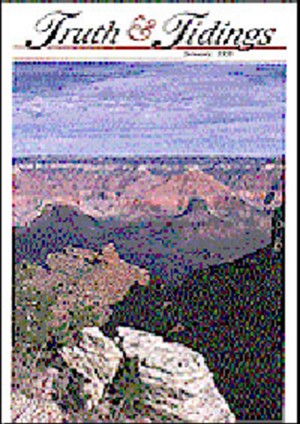 I first became acquainted with our esteemed brother Ballhagen in the winter of 1975 when I was invited to join him for a gospel series at Saginaw, Michigan in a one-room schoolhouse. The meetings continued for six weeks and God saved some souls who are still in the assembly at Saginaw.

Before brother Ballhagen returned home, he invited me to join him in a tent effort in Bay Springs, 120 miles from Tylertown. These meetings continued for seven weeks. From these early experiences, I learned that he was a true evangelist and pioneer. He encouraged me to reach out to new places with the gospel. He seldom missed an opportunity to speak to people about eternity, but he was kind and compassionate in his approach. He often preached to large numbers of workers outside a factory, but he was also at home in speaking to a few souls in a “cottage” meeting.

He often related his memories of work in Alabama. He said that there was no need to announce a time for a meeting. The people who worked in the cotton fields came when their daily work was finished. Not only was the 60 by 90 tent full, but there were often more people outside than inside. He remembered those days as the “hayday” of the work.

Mr. Ballhagen was a gentleman and gave me an excellent example of a steadfast laborer, “always abounding in the work of the Lord.” Even when his health failed, he continued to visit in the hospital, feeding people who were too weak to feed themselves. He also continued to visit jails regularly. He was a prince of a man and no effort was too great to reach a soul for Christ.

He was marked by love for the assembly and was faithful to attend even at times when he was weak and sick. In many ways, he was like a father to me. He was never critical, but did not hesitate to correct me if I was wrong. I enjoyed working with him. I will miss him.